Joe Nista: Gone but not forgotten 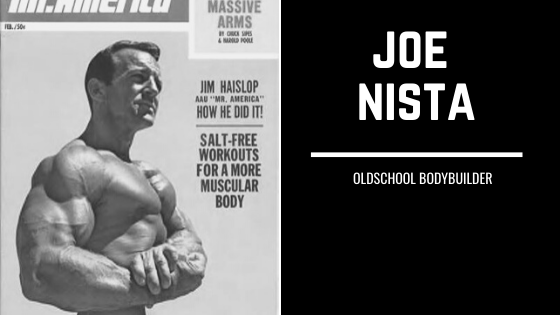 Bodybuilding legend Joe Niesta was born on Sept 22, 1928 in Brooklyn, NY.
Mr. Niesta was not always muscular and big. At 16 years old, weighed only 118lb and he was not much to look at, physically speaking. He was a studios lad throughout his high school and college career. When Joe was a lad in high school, he suddenly received that same inspiration as have numerous others – that of seeing the pictures of the great John Grimek! As soon as Joe’s eyes fell upon Grimek’s huge biceps and the rest of his mighty physique, he immediately wanted muscles exactly like them.

Hardly anyone has equalled Grimek, but there is never any harm in owning a dream to look like him one day. That is how Joe really started off with his weight training career. He was so highly enthused that he declared to himself that he would get large muscles in seven days. He fully expected to see good gains from workout to workout!

Joe Nista during his first long year with weight training, was one of the most disappointed lads in Brooklyn, New York, his home at the time. He lost much hope, but never courage. He had what it takes to succeed, plenty of grit! He refused to be beaten. He plodded along with his weight training for the next couple of years as he kept stepping in the footprints of his future shadow – the man he wanted to be!

Just as the muscle-bug had bitten Joe, the boxing germ began nibbling on him too, so to speak. He used to put on the gloves with his chums and do friendly sparring occasionally. He really enjoyed boxing, in addition to his weight work.

Joe had 12 boxing bouts and won all ten by T.K.O. to win a championship!

Joe has many fine friends. One of his best comrades began whispering into his ear and finally induced him to enter a boxing tournament that was to be sponsored by the Knights of Columbus and also the Catholic Youth Organization. This was a regular annual affair. Joe then joined the K. of C. and the C.Y.O. to become eligible to compete in tournaments.

During his training period for this boxing career, he was forced to discontinue most of his weight training, much to his dislike; but he could not do both. He had placed himself in the hands of his best friend, who became his manager.

After Joe had knocked out his last opponent and was declared the champion of the tournament, was he to be blamed for entertaining thoughts of adopting boxing professionally and perhaps one day in the future becoming a world’s champion? He had an enviable record.

A sad setback floored Joe when his manager suddenly died. It knocked out all future desire to continue boxing, and there was also that call within him to return to his weight training.

Life is often strange in a way as it causes out feet to stray and go in different directions from our original intentions. Joe received a new inspiration while attentding vaudeville theaters and watching equilibristic performers. Those hand-tohand balancers always held Joe motionless with intense interest as he gripped the arm-rests tightly on his theater seat until it came time to applaud. Again a little microbe bit him. This time it was the hand-to-hand balancing and acrobatic bug.

For several years Joe had enjoyed hand balancing and tried handstands on odd objects. Besides such balancing he used to experiment with various and simple tumbling stunts for added amusement. Whenever Joe decided to go in for anything seriously, he did so with an all-out effort that was always generated by great enthusiasm.

In time Joe became a splendid hand-balancer as a top-man and also a speedy acrobat, being able to do a series of back flip-flaps before winding up with a back sommersault in layout style. He also was proficient on the trampoline and could do a double back sommersault upon the bounding pad. He also became a perfect balancer on one hand. Joe mastered it in an absolutely sure one-hand-stand upon anything on which he could place one hand. He used to do a one hand stand balance on a partner’s head.

Joe’s steady partner at this time was none other than Joe De Bella. Throughout all these activities, Joe Nista, Jr., never stopped his weight training activities. In fact, he was using heavier poundages, and had built up a fine physique. He was very muscular, and with fine separation also.

Joe nearly broke his neck and was in the hospital for some time. One day, while performing one of the stunts in balancing which had been done numerous times previously, Joe was again the top man on a standing three-high balance at a beach. The bottom man was standing upon the hard sand at the water’s edge.

As Joe was about to perform a back layout sommersault from the shoulders of the second fellow, the middle man suddenly pushed forward as Joe started his backward layout flight through the air, which caused him to fall and land head first upon the hard sand. The top of his head crashed against the earth.

The doctor said he was lucky to have well developed and strong trapezius and other coordinating neck muscles as his neck, which otherwise would have broken.

The medicos then found he had a blood clot in his head, but it gradually dissvolved itself. However, nIsta said, one of the nurses injected a hypodermic needle into his left shoulder to ease his pain, but apparently it injured the left deltoid. His whole left shoulder was almost completely inactive for the next four to five months.

When he came out of the hospital, Joe patiently did front raises with 2 1/2 pounds and gradually increased the resistance weekly until his left shoulder became equal with his right both in strength and appearance.

Joe emphasized that he does not believe in set after set in numerous counts, but states that six sets should be the maximum for one particular exercise and even less with many other movements. He claims that one can reach a “pumped-up” condition and lose it by doing too many extra sets. He trains each individul muscle area and lets all of the motions fill with tension in each movement – lifting and lowering which creates a faster and better “muscle-pumped” condition and thereby avoids the need of extra energy-wasting sets.

He considers the benchpress as designed for the triceps and pectorals, just as the squat is for the legs. “It is for power and size,” Joe said. He never failed to include  benchpress as it has become one of his favorite exercises and his workout would not be complete without it. 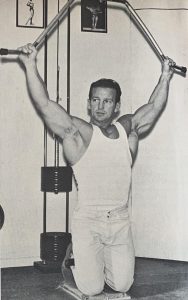 He entered the 1964 Mr. California contest and won first place for the best back, best abdominal and best chest. In addition, he received runner-up place in the contest itselt, and second place for having the best arms.

He devotes about two hours for each workout and trains four times weekly. His favorite exercises are: benchpress, standing side laterals, triceps press with dumbbells, bent arm flies, and dips with weight attached to his body. And food-wise, he eats three small meals and one large meal daily.

Joe discounts most the emphasis on heavy milk intake and claims that bodybuilders (not weightlifters) use too much milk. Despite its food value, milk he claims offers an avenua for bulking up and tend to reveal such around the waistline if taken in too large amounts. His substitution for too much milk is non-fat cottage cheese which he does not leave that bloated feeling no matter how much is eaten. He also enjoys ground round steak, not only for food value, but taste. This is easily prepared, he states, and also economical.

His one recommendation of hi-protein for bodybuilders is white meat of chicken and fish. He usually eats lean steaks, eggs, salads and all vegetables and practically every fruit that is in season.

His only special diet is in the quantity of these foods. And Joe claims that he can fluctuate his bodyweight eight to 12 pounds in less than two weeks, and which process depeds upon the passing desire to gain or lose weight. He is also a firm believer in vitamin “C” and daily takes 3,000 to 4,000 mgs.

Joe is a most likeable fellow and a real gentleman, and being a college man he is an exemplification of brains and muscles combined. He trains for better health and feels no one can ever become too healthy.

Training affords enjoyment and relaxation for him. He is a faqmily man with teo children, ages eight and 12 years.

“Joe Nista stood out, not because he towered over the rest of us, but because he was a man with a smile as broad as his shoulders. On more than a few occasions a gang us gathered in the canyons or beaches to take photos with Artie Zeller of Russ Warner. Sandy, Joe’s darling daughter filled the muscular scenes with female charm and curves. Seasons had gone by and we were getting to know each other behind the cameras and family parties for wholesome fun and sharing often accompanied the shoots.

Joe brought a welcome east-coast quality to the scene, an honesty and rawness and depth as rugged as his muscle and might. Funny how time slips by and we lose sight of one another and then we reappear in the dim light of passing. For a moment the light is as bright as the noonday sun while we laughed before the clear lens of life. On three — one, two and smile.”