You are playing football and need some help to improve your athletic performance? Maybe you’re dreaming to play for the NFL? Or even you want to become a Strength Coach for the NFL?

Then I have some good news for you. In this article you will learn from the best, John Gamble!

But who is John Gamble?

John Gamble was strength coaching the Buffalo Bill with great success. The combination of correct technique, hard training and knowledge paid off!
Before coaching Mr. Gamble was a so called ‘Powerlifter’.

Being a powerlifter would take your whole attention on three lifts.It’s like weight lifting but with another exercises: Squat, Deadlift and Benchpress. It’s not about being big and muscular. Lifting weights is a mental battle. YOU vs. the iron!

He did not want to let lifting weights become a possession. Thus he retired and became a coach.
John Gamble was a football coach in the National Football League (NFL) from 1994 until 2012. He finished his career with the Buffalo Bills (Networth: $4.3 billion) as their strength and conditioning coach

Here’s John Gamble’s story and workout philosophy!
He tore the cartilage in both knees shortly there after and that ended his track career. Thus he became involved in powerlifting after his track and field career. He had been training for the 1980 Olympics. The United States boycotted the Moscow Games and that ended his dream. 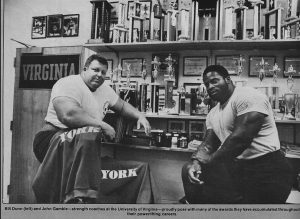 Bill Dunn was the Virginia strength coach and his lifting partner at the time. John began entering powerlifting meets. He liked what he saw and refocused his naturally competitive nature to this new sport. He was 22 years old.

Quoted from John Gamble: “I always trained to win. I was always in shape when I stepped onto the lifting platform and I never overtrained. I never felt I achieved my full lifting potential at a meet.”

“As to the specifics of my training, I am a firm believer in periodization. I never performed less than 3 repetitions in any training lift. For example, when I was training for the 1983 Senior Nationals, my goal was a 900 pound squat. I had as a goal for my foundation stage, 2 sets of 8 reps with 600 pounds in the squat. 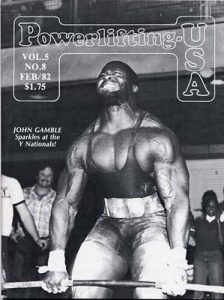 Does pure powerlifting have direct athletic applications?
John Gamble: “That’s a good question. The answer is yes and no, which is not a good answer. Take football as an example; when you look at the movements that comprise the game, the quick movements, the power movements, the lateral movements, etc.., you try to design a lifting program that incorporates, or mimics these movements. So, each sport has a lifting program that is a little different due to the individual demands of the particular sport.

Powerlifting is a sport. It is complete. It is not a means to an end, but and end itself. Pure powerlifting, without any modifications, would be of limited sport value. Of course, any intelligent trainer would make some sport-specific modifications. Then powerlifting has immediate sport applications, but at that point it ceases to be pure powerlifting. It has become something different, though it is based on Powerlifting and it’s principles.

You can look at it two ways. Most of the so-called expert would say no, powerlifting does not have direct athletic applications. However, in my own personal experience I know this is not correct. When I was at the peak of my powerlifting career I had a 32 inch vertical jump (weighing 292), and though I not thrown the discus in five years, I was able to throw 197 feet, which was only five feet under my best throw ever. So, you cannot discount pure powerlifting as an aid to athletic ability.

After all, powerlifting’s goal is size, strength and power, which is exactly why we train athletes with weights. Fir sports applications you need to incorporate certain modifications.

Why not train Herman Moore (football player) the same exact way you trained as a powerlifter?
John: “The needs are different. First you have to evaluate the athlete’s needs and goals. Every athlete has strengths and weaknesses. My job is to identify and correct these weaknesses. For example, a receiver with blazing speed might be small and weak.

That would indicate a certain approach. A lineman might be huge and strong, but slow and lacking endurance.

That would indicate a different set of training guidelines. Everything is individualized. Our training programs are custom made, depending on the individual and their specific needs.

Herman was 6’5″ and 180 pounds when he came to us. He is now 202 pounds with 3.5% bodyfat. His physique and position indicated a certain approach to take. We think it was a correct approach.

Regardless of the individual, we do stress explosive power in whatever lifts we do. You control, you explode. On the eccentric position, you lower the weight in slow, controlled fashion. On the concentric movement, you raise the weight in an explosive fashion.

Pushing a weight as quickly as possible builds usable athletic strength. But you have to be careful.

Most athletes will lower the weight quickly and bounce out of the hole or off their chest, which is exactly what we are trying to avoid. Serious injuries result from this type of technique. A slow, controlled lowering of the bar or dumbbell is the key.”

What exercise selection do you use for your football players?

John: “I try to have my football players utilize movements that require them to be on their feet while they lift. Everybody wants to sit or lay down to perform their exercises. I guess it’s human nature. Given a choice, we insist they stand up.

I can not say enough good things about the squat. I believe in the squat. All our athletes do them. It is the cornerstone for our lifting. If someone tells me that leg presses are a good substitute, I tell them that light squats are better any day of the week.

I have convinced our athletes of the benefits of squats, and we do them religiously. Nonetheless, I have heard every excuse known to man as to why they can’t do them on any given day: tight backs, sore knees, you name it.

I’ve heard it used as an excuse. Everybody in every sport does squats. I should add that these are parallel squats. Quarter squats and half squats are of no benefit to the athlete.

How often train your athletes?
John: “Four days a week during the off-season, which is when we really work them. In season we attempt to hang on to as much as we can of the strength and fitness levels we have acquired. We cut back our poundages to roughly 80% of our maximums. We use a standard split routine. Legs and back twice weekly and upper body twice weekly.

We do not test the squat or the power clean. These two movements require some practice. Over the next four weeks they concentrate on their lifting techniques with an empty bar or a broom stick.

After that, if I feel they’re ready, they can begin to lift seriously. Once they reach this level, I start them on a base level strength program. Varsity level freshmen are not going to get too much playing time, so I push them hard right through the season.

I continue the four day a week program and can really make some substantial progress with these guys during the season. For a freshmen, the real test is spring football. That’s when he gets real scrutiny from the coaches.

During the preceding season the coaches are so pre-occupied with winning, they don’t have time for talent evaluations. Come spring ball, they’re looking for new players who can help the program. Regarding speed training, we monitor progress monthly. When you have an athlete for a four year period as we do, you can make a lot of progress.

We use video taping on an extensive basis in our speed training. It is a valuable training tool. For example if we tape an athlete’s running style a lot of things immediately become apparent. Perhaps the arm movement needs correcting, or the athlete is not getting a good arm-knee lift.

We will show them how they look on tape. This gives them a very clear picture of their mistakes. We will run the tapes over and over. Then the athlete makes the necessary adjustments.

We had a tight end who ran a 5.20 forty. He gained 30 pounds of bodyweight and then ran a 4.60 forty. This particular athlete did not believe in strength training. He apparently came from a soft background. He was a constant complainer. Everything hurt.

He always had back problems and a show slew of excuses. He wanted to play in the N.F.L. On the plus side he had good size, 6’5″, 240 pounds and good hands.
He dropped a lot of weight. He went down to 205 thinking this would increase his speed and relieve his back pain, but come to find out, he was just plain weak!

This realization caused a complete turn-around on his part. He put himself in our hands. He did what he was told and threw himself into the program. We worked with him, trained him hard and the results were immediate. He gained 35 pounds of muscle and totally transformed his physique. He got bigger, stronger and faster.

The sad part of the story is he never got to play in the N.F.L. The pro’s reviewed his game films and were not impressed. Of course, they were unaware that the guy were critiquing had undergone this radical transformation. They never saw the finished product; this big, strong, fast kid who could play in the N.F.L.

He never got his chance.

Running Program
John Gamble: “We have running drills that work on the drive of the knee, the extension of the leg and the recovery of the leg. These are known in the trade as A.B.C. drills or “Mach” drills. There are three drills for each segment of the leg movement. This is all related to timing; you’re looking at how to improve the knee drive, how to extent the leg and finally how pull the leg back to recover quicker. We work these drill four times a week Mastery of these drills will increase your speed.

Additionally, we practice agility drills and interval running for endurance. In interval running we have the athlete do everything from 440 yard runs down to five yard sprints.This simulates just about every running situation and athlete will come across in an actual game environment.

How much total training time (lifting, speed, cardiovascular, flexibility and agility) does this require of the athlete on a weekly basis?
Eight and a half to nine hours a week. It’s not the amount of time you spend, it’s the amount of quality time spend.If you are giving 100%, nine hours a week is more than enough to see real results. When you invest quality time, it does not take as long as most people think.

Contrary to popular opinion, there are no superhumans out there. True, some folks are blessed, but we all must train to improve. If you have a good, scientifically based program that you believe in, you do not have to spend your whole performing it’s requirements. If you have a good program and spend intense quality time when performing it, you can fulfill the requirements in a reasonable length of time.”