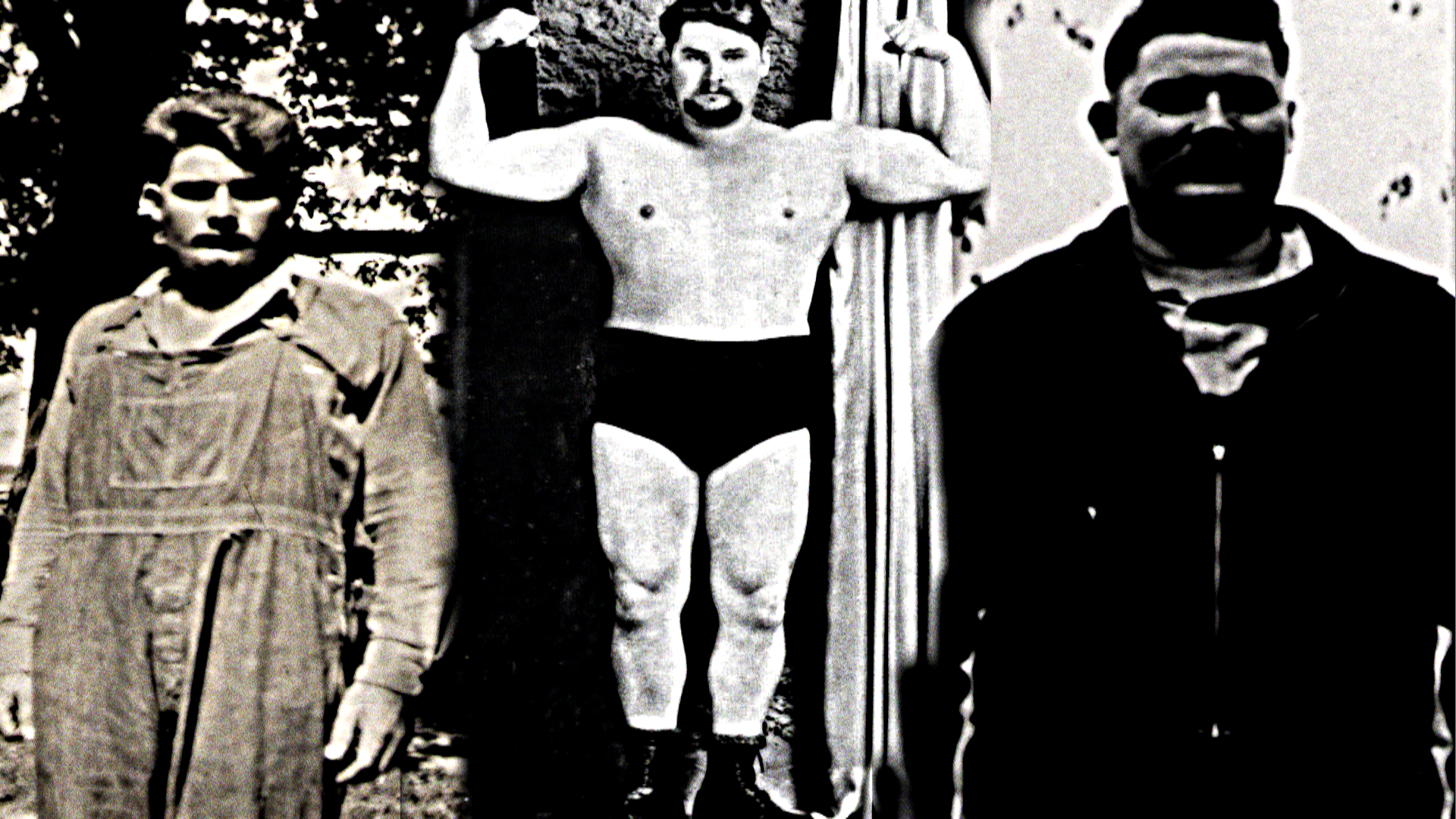 Hise was born in Scotland, Illinois 1905 (now it is called Scotland) on the eastern border of the state. J. C. Hise came to America’s attention after Mark Berry profiled this pioneering lifter in the August 1932 issue of Strength. Hise’s size and strength were impressive for the times and the rapid progress he attributed to high repetition squats stimulated interest in this training approach. Hise was also strong in the deadlift, having pulled over 700 lbs.

His childhood friends always called him Curt (not Joe, or Joseph). Charles A. Smith always considered Hise as the true pioneer of weight training- at least in regard to the squat.

„Someday a weightlifter will clean and jerk 500 pounds,“ said Joe Hise to the gang of lifters around him at a lifting meet. Most of them told Joe he was day dreaming, for at that time, in 1936, that poundage was a good deadlift!

But Joe went on to say it will take a combination of hard work on the legs, back and bodyweight, plus plenty of lifting practice and a mind that will accept the fact that it can be done! Then in 1970 his „pipe dream“ came true when in Columbus, Ohio, Vassily Alexeev clean and jerked 501 pounds. It was during the early 30s that Joe Hise started to train with barbells. As a youth he had a couple of bouts with pleurisy and found with exercise he never had the trouble again. With the standard routines of the day, Joe found himself gaining from 160 lb to 200lb after a little leg work, but then hit a sticking point. After reading some of Mark Berry’s articles on the deep knee bend(squat), Joe decided to give it a try. Using the press behind the neck for 15 reps, and the deep knee bend; in the squat he did 8 reps then rested and did 8 more; he then removed 100 pounds from the bar and did 20 more reps.

After thirty days Joe found himself weighing 229lb with a chest of 46 ½ and thighs reaching 28 inches. It wasn’t long before Joe and his growing exercise was the talk of the strength world! His fast results were reported in the February issue of Strong Man and the August 1932 issue of Strength magazine. He wrote Mark Berry and said, „Although I exercised for years I never knew that leg work increased the chest and lungs. I thought it was the chest exercise that spread the chest until I read your article in Strong Man.“ 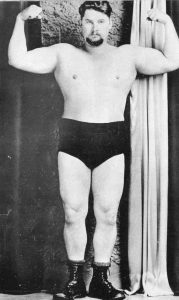 Joe used a straight 20 reps in the squat, and soon found that he weighed 237 pounds at 26 years of age. He continued his experiments and finally reached a bodyweight of 298 pounds and had an arm of 19 ½ inches, chest at 56 inches and thighs that measured 33 inches at 5’10“ tall. During his training Joe made sure to eat meat twice a day and drink plenty of milk. He also ate salt pork as he said this increased his thirst and caused him to drink more milk and thereby aided his weight gaining. He also believes in plenty of rest and sleep. He is not lazy as some seem to think. It is just his training philosophy! Hise never bench pressed- mostly shrugs and squats.

After having used the squat for months, Joe decided to give deadlifting a try. He used it in the regular bent leg style and then tried the stiff legged deadlift; this caused him to have a stiff back. Using his inventive mind, Joe came up with a hopper so he could bounce the weight past the danger point. He discovered that if he bounced the weight from wooden planks that were raised about two inches at each end, he relieved the overstretch and allowed him to handle 550lb in the stiff legged deadlift for 5 reps. 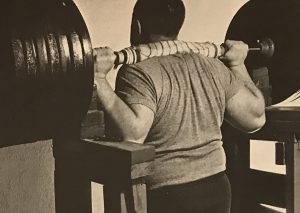 Hise was ahead of his time with some of his training methods for example the 20 rep squats, Hopper Deadlifts and Hise Shrugs. He started developing these training methods outdoor or in his garage with minimal equipment! The Hise Shrug, which doesn’t even seem like an exercise at all, has the magic to turn a hard gainer into a barbell success and the power to put muscle and measurements onto a broomstick. In order to do the exercise you need a solid safe power rack capable of supporting plenty of weight. The height should be at a point where you only have to lift the bar up an inch to be fully off the racks. Standing firm and tall, lean very slightly forward so your toes grip the floor. As you breathe in, shrug your shoulder up by the power of the trapezius and then exhale as you relax. The barbell will travel from a 1/2 inch to an inch or more according to the amount of weight on the bar. 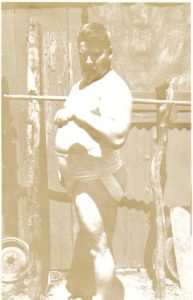 Hise believed you should exercise 3 times a week on growing exercises, and on strength building or lifting, twice per week. The first exercise in a growing routine is the squat. First you do 10 reps and then take three deep breaths between each rep until you reach 20 reps; one set only if you use heavy weights. This, plus the wrestlers bridge, two arm pullover with a light weight, upright rowing, deadlift and curl would pack the weight and power onto a stubborn no-gain pupil.

Joe never had fancy equipment and had to train under the most primitive conditions. Even at home his squat rack was a couple of hedge posts up against the garage. Because of this outdoor training, his workouts were spasmodic in the summer months. Even with such conditions he was able to make great progress. 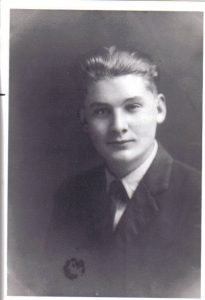 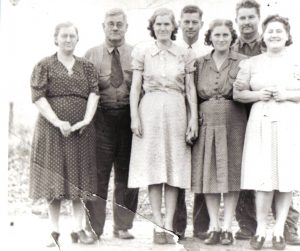 Curt was never a weightlifting fanatic; He did not live for lifting. He trained three times per week and then he would live the rest of his life’s normal activities. In the above picture you can see his family. This is the only known family photo including JC Hise: Left to right: Amy, Charles [Hise’s parents], Frances, Frank, Jessie, Joseph Curtis and Beulah.

He owned property in Columbus, Ohio. He claimed to have worked for the Pinkerton Detective Agency. He was a very unique personality. He loves to read and spends most of his spare time reading books on philosophy and all the classics. He was also a travelling man and loved to visit his correspondents, many times much to their surprise! 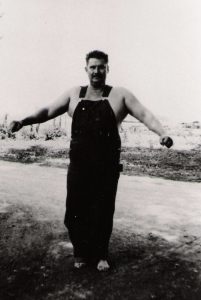 Joseph was a hard worker. When necessity arises he can do a terrific amount of work. When he left home here he weighed 270 pounds. From here he went to California where he worked in lumber camps, mines and such was his labors that his bodyweight went down to 208 pounds

Curt referred to the place he worked in Hazard, Kentucky as “hell-for-certain”. His sister cites that those mines were that ruined his health. He would be sick. He worked in them and then he spend some time in the hospital, then he came home to get well, and one time he came home, and his Sister didn’t recognize him. He looked so bad. and he’d get his health back again- and he would go right back into the mine.

Between mining jobs he was unemployed. He mined for awhile and saved his money like mad and then laid off. He worked double shifts and then he would go prospecting or would make his trips. He would go prospecting for gold or whatever. Uranium in later years; gold originally, but uranium was the big thing in the past. Curt was always gonna strike it rich. He was telling his family members that someday he was gonna find that big one.

In the wintertime he used to lift in the family-house. He bounced the weights – also the house shacked. He would be upstairs in the bedroom lifting weights and he would drop those weights and the whole ceiling would shake. A man told who later purchased Curtis’ house that the ceiling was sagging to an unbelievable degree. Whether this was curt’s cause or the invasion of termites which destroyed the remainder of the home.

Reading interest
Curt read a lot of history – history of the West. He used to spin tales on his sister when he was down in Kentucky—and then his sister found one day – he had a book laying around, and he wasn’t there, so she sat down and was reading his book, and it was about Hazard, Kentucky, and the coal wars down there that they had; strike wars. And so she was reading this, and it was really interesting reading. Then pretty soon Curt came home, and the next day or so, he starts spinning these tales about when he was in Kentucky. And all of a sudden it dawned on her- that he was quoting from that book. He had read that book and he was telling it to her like he was there. But he never did say“I was there“, but he was telling her stories about what was going on at the time when he was there, and you would naturally assume that he was firsthand witness to it; which he probably wasn’t. They were interesting stories he would tell. He could tell it better than the book told it. You didn’t carry on a conversation with Curt; you’d just sit back and listen. Curt just read anything, and after he would read it, he would sit there and hold his head back, and was memorizing it all. He had probably largely a photographic memory.

According to Joseph’s family most of his books are gone. But he had the widest rage of books you ever saw. When he went into mining, he wasn’t mining a mining engineer or anything, but he read all kinds of books on geology; he’d start off with elemental books on geology, and follow it right up through with college level.

Joseph Curtis: “Strong men love peace and safety more than weaker humans that are experts on other people’s intention.” 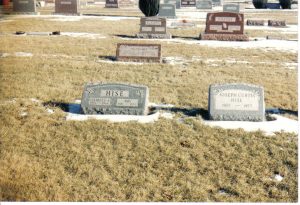 Mr. Hise died at 6 p.m. Sept 27 1972 at Poplar Bluff, MO., of an apparent heart attack. He was driving a truck and had pulled off along the side of the road. He leaved a sister, Mrs. Frances Gurnea of Homer, a brother, Frank, of Danville, and several nieces and nephews.