Karl Norberg, born in 1893, in Brecke, Sweden, was a great benchpress legend. He was very famous and even trained with Bruno Sammartino!!! Furthermore Mr. Norberg was able to benchpress 460lb/208kg at age of 71! In this article you will learn Mr. Norberg’s lifestory and training philosophy, have fun – Mr. Berg!!

On January 5, 1893, in the northerly village of Grimes, Sweden, began the life of Karl Norberg. Karl came from a family of fourteen children. There were eight boys and six girls.

Karl learned one thing very early in life; he learned the meaning of WORK. When Karl was a young boy of 12 he began working in a saw mill. His work day began at 6 A.M. and did not end until 6 or 7 P.M.. And this continued six days a week! Later he continued his toil by building railroads. He also worked as a logger.

During World War 1 Karl was a member of the Swedish Army Engineers. His job was to build and destroy bridges. Then, in the year 1918, Karl returned to civilian life and entered into the institution of marriage.

It was during 1927 that he and his wife moved to America. Again he worked as a logger and a railroad builder in Northern California. In 1934, Karl was among hundreds of other men seeking jobs as stevedores on the docks of San Francisco. Everyone was desperate for work during the depression years. 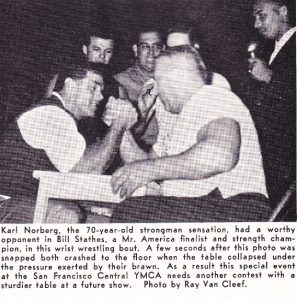 Hunger was common those days. It was during an interview that Karl was asked to prove his worth as a stevedore. He reached down and picked up two-100 pound bags of sugar (one in each hand) and proceeded to press them overhead several times with ridiculous ease.

The interviewer was so impressed he hired Karl on the spot. There have been many tales told about “The Noble Norseman” around the docks of San Francisco. It was once told that one day he worked for a sick friend by carrying a double load so that his friend would not lose a day’s pay. This simple gesture shows the true character of Karl Norberg.

Karl loves people and life. He is an extremely kind man. He has only good word for everyone.

Karl’s contact with the Iron didn’t come until 1939 when he was introduced to the weights by some San Francisco bodybuilders. And although he trained he was never too serious about it and did it “just for fun.” 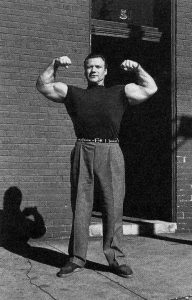 But it was the following year, December of 1940 to be exact, that Norberg got his first taste of “competition.” This was during the time when some oldschool weightlifters called “York member”, Bob Hoffman, John Grimek (Mr. Universe, see the picture above!) and Tony Terlazzo were making a tour of the West and gave many lifting and exercising demonstrations.

That evening while Tony and John were lifting, Grimek extended an invitation to anyone who cared to come up and lift along with them. Friends of Karl, who knew his great potential, urged him to go up. Finally good natured Karl started up for the specially built platform on which the lifting took place.

When asked how much he wanted to try he elected to take 240 pounds for his first attempt, which was terrific in those days. But what was amazing to Bob, John and Tony was the fact that Norberg used the undergrip to got it to his shoulders, a sort of “glorified cheating curl” movement, and from here pushed it overhead still keeping the same undergrip.

Grimek, never having attempted it before, decided to try it and took the same weight, making it easily. He and Grimek went on to do 260 and then 270, which Karl made it but Karl declined his attempt. Nevertheless, the wonderful contest that Karl put on that night made it an unforgetble event for all those who were present that night.

From then on Karl got more interested in training. In the exhibition at Santa Monica, a few days later, John Grimek made 305 pounds in this reverse clean and press.

And when Grimek got back to York Barbell Club from his long trip he had nothing but praise for this wonderful 48-year-old superman, and today, 25 years later he still feels that Karl Norberg was one of the strongest “natural” men he ever saw…for what man over 70 is capable of doing any of the lifts that Norberg can do? Not one! Karl Norberg is in a class by himself, regardless of age. 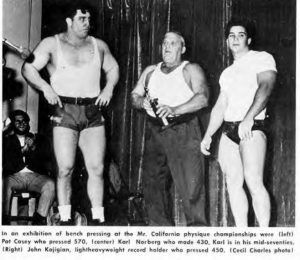 Karl followed his weight training mostly as a hobby. In his seventy-fourth year Karl is undoubtedly one of the strongest men in the world. He certainly must have found “the fountain of youth and eternal strength.” His feats of strength are unbelievable. He can bench press 400 pounds any time of the day, although he has done 460 in this lift. He has never tried more but those who see him do the lift swear that he can do much more. In fact he was “tricked” into doing the 460lb.

He really wanted 430lb but a few of the “gym jokers” loaded it to 460 and he pressed it just as easily. If he wanted he could press 500 pounds.

The man does not know his own strength. He handles heavy weights as though they were made of feathers.

“The Noble Norsman” also has deadlifted 600 pounds and has never trained on the lift. What’s more, he was not satisfied with just lifting the weight, he decided to walk around the gym with it. One time he walked into the gym just after someone completed a 500 pound deadlift. Karl walked over to the bar without warming up and did a high pull-up with the weight. His only remark was, “Dats goot!”

Another lift that he doesn’t practice much is the crucifix lift, yet this amazing man has been able to hold out a pair of 80-pound dumbbells. That’s quite a lift.

Sometime ago wrestler Bruno Sammartino came into the San Francisco “Y” club to take a workout. Karl was asked to prove his strength. He gripped Bruno with each hand at his waist and held him in a midcurl position, I suppose that this stunt was accepted as proof. Bruno weighs around 260 pounds so that was quite a feat.

The Norberg training schedule is a very simple and uncomplicated one. He only employs a few exercises. The first exercise he usually does is the (1) Bench Press. He warms up and progresses to several sets of six reps. He then continues by working up to doubles or sometimes singles. The final weight exceeds 400 pounds. The second exercise is usually the (2) Press Behind the Neck. The application is almost identical. The third exercise is the (3) Incline Barbell Press. Again the same method is used.

The fourth exercise is the Seated Barbell Twist. No great poundage is used for this exercise. On some occasions Karl may employ a rowing exercise with dumbbell. It does not seem to be a regular part of his general training schedule, however. He usually train on Monday, Wednesday and Friday, but sometimes he may train four times a week; Monday, Wednesday, Thursday and Friday.

You may want to know Mr. Norberg’s secret of his longevity and to what he attributed his great strength!? Mr. Norberg could not explain it in a few words but it boiled down to one word – WORK.

In 1965 Mr. Norberg retired, Karl used to lift weights to stay in shape. At age 82, Norberg bench-pressed 340 pounds, despite a hampering shoulder injury, prostate cancer and diabetes. At age 86, he performed a 300-pound bench press at a fund-raising event for the benefit of abused children.

Karl Norberg returned to his birth place in Brecke, Sweden, in 1979. He died in 1983, one week after his 90th birthday. Bodybuilding legend John Grimek wrote in Strenght & Health magazine: “Karl Norberg was the most naturally gifted strongman I’ve had the pleasure of meeting.”