Weightlifters and Strength Athletes in the United States and throughout the world have heard of Karl’s tremendous feats of strength and he is popularly known as “The Strongest Man in the World for his Age.” His most notable feat of strength, a 460lb benchpress at age 73, was witnessed by Ed Lolax (who was and still is Karl’s workout partner).

At the age of 82, Karl is still going strong. The members of the Sports Palace Gym celebrated his 82nd birthday and he bench pressed 315lb. The birthday party and strength exhibition was held at the Sports Palace Gym and was shown on channel 5 television in San Francisco and throughout Northern California. The Sports Director for Channel 5, Wayne Walker ( a former linebacker and All-Pro Football Player with the Detroit Lions) commented that he had once tried to bench press 300lb and that it almost drove him through the floor. He further commented that Karl should be in the Guinness Book of World Records because he had never heard of anyone 82 years of age doing what Karl can do.

Karl Norberg was born into a very large family of 14 children on January 5, 1893. Out of necessity to help support the large family of 8 boys and 6 girls, he went to work in a sawmill at age 12. He worked a full day which was (in those days) from 6 a.m. to 6 p.m. Later on he went to work on the railroads and in the logging camps and saw mills in Sweden.

During World War 1 he served in the Swedish Army. After the service he was back working on the railroads and in the woods until “hard times” brought him to the United States in 1932. Here he was lucky enough to get a job as a longshoreman and an Alaskan Fisherman. Karl was known around the San Francisco waterfront as “The Big Swede” and his remarkable strength is still a legend there. Karl is very proud of the fact that he never missed a day of work due to illness in the 26 years he worked as a longshoreman. He worked there from 1932 (he became u United States citizen in 1937) to 1958 when he retired at age 65. During the yeas he worked there he did not have much time to train with the weights but he did his own version of weightlifting and practicing feats of strength. One of the most famous feats was holding 100lb sacks of flour in each hand overhead and then lowering them out to the sides in a crucifix position.

At the time that Karl was doing this he was told by some of his friends that the world record for the crucifix lift was held by George Hackenschmidt with 90lb dumbbells in each hand.

Karl also used to playfully do presses for reps overhead with a 240 lb co worker. He also did a one arm deadlift with a piece of dock equipment that weighed 550lb. This piece of equipment had a handle on it and Karl was the only man around who could pick it up off the ground and complete a one arm deadlift.

Karl first ventured into a gym in 1940. The place was the San Francisco Cetral YMCA and during his first day there he walked over to a barbell loaded to 230lb., picked it up and military pressed it. He was 47 years old then and weighed 225lb., at a height of 5’10”. He also loaded a bar up to 650lb., and deadlifted it but this was not enough exercise for him so he walked around the gym with the 650lb barbell. Obviously Karl has been gifted through heredity with great natural strength and he tells that his father was considered the strongest man around where he lived in Sweden.

The father got this title because he was the only man around who could pick up a full grown horse in the back lift.

Toward the end of 1940 the San Francisco Central YMCA had a famous visitor who was Mr. America and also the United States Weightlifting Champion. The visitor, John Grimek, was later to write that “Karl Norberg is the most naturally strongman I have ever met.”

He came to this conclusion during a weightlifting exhibition he was giving while touring the United States.

Karl picked up the 240lb that was on the bar palms out and curled it up to his shoulders where he pressed it palms out (reverse grip press). Grimek did the lift the same way and they then proceeded to lift 250-260 and 270 in this manner. Karl stopped 270 to a thundering round of applause.

Grimek made this weight and then went on to make 280. When one considers that Karl had no practice or technical training with the weights and that he was one months away from his 48th birthday, it is no wonder that he would have to be considered the most naturally strong man in the world at that time.

For the next 17 years until Karl was 65, he had very little time to train with the weights. World War 2 and the years following kept him busy on the San Francisco waterfront. Then came the Korean War for several years which kept the longshoremen as busy as the World War 2 years where Karl said he sometimes worked triple eight hours shifts without a break. Karl had a small set of weights in his garage at home totaling about 200lb, but he said he didn’t lift them very often since he was always so busy, Karl would work on an Alaskan Fishing boat “pulling heavy nets of salmon onto the boat.”

KArl feels that the hard physical work he has done all of his life helped him to become the strongest man in the world for his age. This is no doubt true, and when one combines this with good heredity, the love for hard physical work, and performing feats of strength, it all adds up to Karl Norberg.

Some of the feats of strength performed while Karl was on the waterfront have already been mentioned. Walking up stairs on his hands was a frequent exercise along with hand-balancing on his hands and thumbs.

He did one arm push-ups and could hand-balance himself on one thumb which is quite remarkable for anyone, let alone a big man weighing close to 230lb.

After retirement Karl spent the next two years between age 65 and 67 working around his home and lifting weights that he kept in his basement. He had an accident while doing repair work on his home and this caused a very serious knee and back injury. Karl had one knee injured and operated on when he was younger and now this accident injured his other knee. His doctor told him that he should not lift any weights because it would bother his back and his knee.

However, the doctor apparently under-estimated his determination to do physical exercise and to try and make his back get better. Karl joined the San Francisco Central YMCA between 67 and 68 years of age and felt that between doing weightlifting exercises and taking steam baths he could be his own physical therapist for his back.

He was apparently right in this, because his back pains went away and he started lifting some very heavy weights. By 70 years of age he did a very easy bench press with 405lb ( he had been taking it easy between 68 and 70 to make sure his back did not flare up on him again). He was also written up in a weightlifting magazine by the late Ray Van Cleef at age 70 and was shown in the magazine holding out an 80lb dumbbell in each hand in the crucifix lift. Doing the crucifix lift with these 80lb dumbbells along with the 405lb benchpress made Karl a world famous strongman to the many people who hadn’t heard of him.

To clean the 110lb dumbbells while sitting on the floor, is in itself a remarkable feat of strength, but then to press them in this position ten strict reps also takes herculean strength. Karl also took the Olympic lifting bar and did sets of 8 reps in the curl.

He sometimes would work up to doing a very strict curl with 205lb (all of these lifts were done at age 73 which should make them all “Age Group World Records”).

On the day that Karl did the 460lb benchpress, Bill Stathes, one of America’s best bodybuilder-weightlifters, commented that the press was quite easy for Karl.

A very unfortunate thing happened a few days later. Karl was working around the YMCA Gym in his capacity as an instructor and he was asked to help move a very heavy rack loaded with weights. The rack tipped over on Karl’s right side and since he had a lot of it, he tried to stop it. He pretty much did so with his great strength, but he injured his right arm and shoulder in the process. His right arm and shoulder have never been the same since that accident, but this has not stopped Karl from still maintaining his title as the worlds strongest man for his age. He kept getting treatments on his shoulder and kept plugging away with the weights even though he admitted at times to having quite a bit of pain in his right shoulder.

However, his love for exercising with the weights and his great determination have helped him to keep working out three times a week except for a period of time between 81 and 82 years of age when he had prostate surgery (major surgery).

Prior to this he had diabetes which he got under control right away and now takes only one pill a day for this. His doctor told him that he had never seen a senior citizen so fast from diabetes and major surgery. 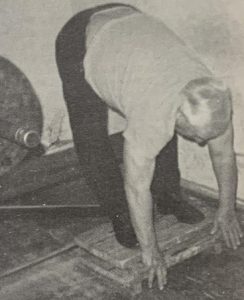 Karl three times a week workouts consist of 10 to 12 sets of bench presses; lockouts on the power rack; triceps pushdowns in front of chest on the lat pulldown machine; lat pull downs behind the neck; dumbbells curls; leg raises and stretching exercises. He is an early to bed, early to rise man.. He starts each day getting up in morning and doing his “string pulling.”

The strands he pulls are two thick, rubber ones, and he can pull three at one time. However, he likes to do reps with the two strands by pulling them first behind the neck and then in front of his chest. At age 82 Karl’s massively muscular chest is 55″; arms are 19″; forearms 17″ and he has an enormous 9″ wrist. This is at a bodyweight of 250lb. His diet has quite a bit of fish and cheese in it and he takes multiple vitamins daily.

Source:
Text by his close friend Ed Lolax. Ed is a former powerlift competitor and has won several powerlift meets in North California between 1965 and 1968.