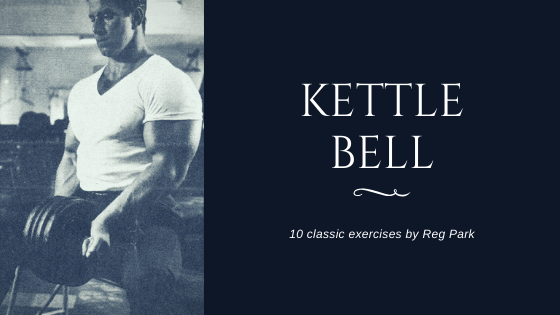 Reg Park was an English bodybuilder and businessman. He won the Mr Universe in 1951, 1958 and 1965. He is probably best known as an idol and mentor to Arnold Schwarzenegger. Arnold learned a lot of training stuffs from Park!

The following kettle bell workout was developed by Reg Park. Have fun!

Lie on back on bench, arms at side. Inhaling fully, and timing the movement TO the breathing, carry the kettlebells sideways and round behind the head till the bells meet. Return arms to sides during exhalation. The arms must be kept locked straight at the elbows, and the hands move at somewhat below bench level.

Do NOT risk any joint strain by using maximum weights. This exercise will do a fine job in arching the breast bone (sternum) and in increasing the true chest size by stretching the costal cartilages. It gives that “well ribbed up” formation. It also mobilises the shoulder joints, giving them splendid freedom of action. If the stretch on the elbow joint causes pain, a very slight bend can be allowed, with a full lock-out in the bells behind head position.

A valueable variation is to do this movement on a 50 degree inclined bench – this brings in some fine work for the deltoids. 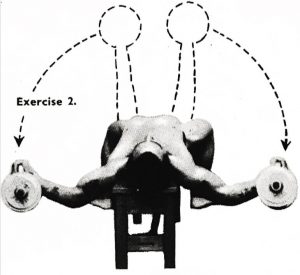 The well known “Flying” Exercise (slight elbows bend) or “Lateral Raise – Lying” (elbows locked straight) performed on a bench and using kettleweights. Breathe in full as the arms are lowered, timing the movement to the breathing. This exercise enlarges and mobilises the true chest, and builds up the great breast muscles (“pecs” to you). An even better exercise is similarly performed on a 45 degress inclined bench. This latter develops especially the upper parts of the pectoral muscles and throws more work on the deltoids. It gives that impressive continuity or “tie in” between chest and shoulder muscles. 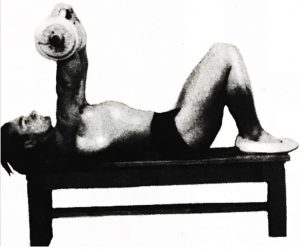 This is the well known “Pull Over at Arm’s Length” performed on a bench, the kettleweights descending beyond the end of the bench. Properly done, this is the greatest TRUE chest (rib box) enlarger of the lot. The essential points for getting the effect directed on the thorax are: inhale fully as the weights (NOT very heavy) are LOWERED fairly slowly behind the head, timing the movement to the breathing; keep the elbows locked throughout; do NOT allow the spine in the small of the back region to rise as the weights are lowered. Attention to these points directs the pull of the weight on to the ribs, breast bone and costal cartilages, which is exactly what we are after.

You can do the bent arm pull over as well, if you want to, using heavier bells to develop the “lats”, but be sure to do the lighter straight arm breathing stuff also to lift your sternum and ribs.

Carry out the “Lateral Raise – Standing” already described, but after the pause at shoulder level sweep the arms to full stretch aloft, elbows locked. Make another shoulder level pause during the lowering action. This work will build up the lateral deltoids, and so broaden the body trainer’s shoulders in a way to delight him. It also develops toe trapezius muscles which form the top line of your shoulders near the neck when viewed from front or rear.

Exercise 6.
Stand with kettlebells hanging at sides, knuckles front. Keeping the elbow locked, sweep one bell forward and up at a steady rate to arm’s length aloft. As it lowers forward the other arm lifts. Do NOT allow any backbend. This is another fine shoulder builder.

The kettlebell handles give most pleasing and effective variation to your curling work for the biceps. Select from simultaneous and alternate standing and seated curling, single arm bent over “concentration” curls, and curling on an inclined bench.

Standing, seated or lying; simultaneous, alternate or single handed, you will find a new and pleasing rhythm in your triceps “curls” (the same exercise as the “French Press” or “Triceps Stretch.”

The “Rectangular Fix” can be unofficially carried out with kettlebells, and is a wonderful strengthener of the wrists as well as a first class forearm developer. Stand, arms hanging at sides with knuckles front. Curl, simultaneously or alternately, to bring knuckles near shoulders, pausing in the right angles position during both upward and downward movements. The exercise is sometimes called the reverse curl. 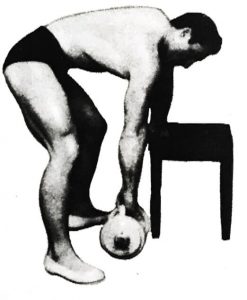 The Archery Exercise (bent over one arm “rowing”). Have the free hand on a support at convenient height to get more power into the lift with the other hand. As arm extension finished let the shoulder of the working arm droop forward loosely, then lift the elbows as high as you can

This will quickly build the “lats” and upperback, and very soon your chest measurement will use up more of that tape!