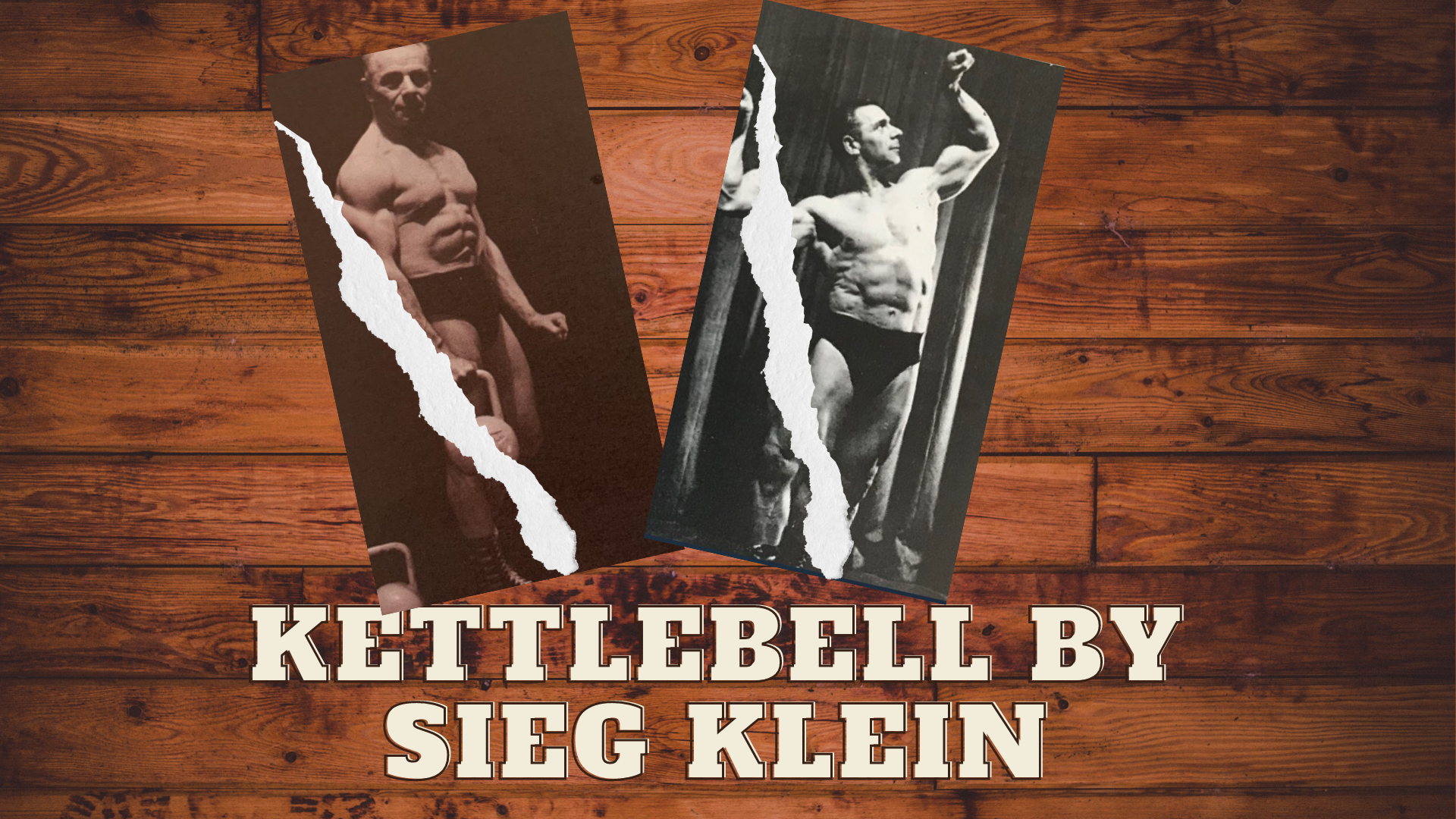 Nine out of ten of the old time strongmen had a certain ruggedness in their arms and upper bodies that many of the present day bodybuilders lack. In most cases this difference can be traced to the use of a variety of equipment now considered to be more or less obsolete, not the least of which are kettlebells. There are many exercises which may be performed with kettlebells instead of the more conventional ordinary dumbbells, and several others which cannot be duplicated with any other apparatus. And kettlebell training brings excellent results. I have never known of a case where the regular use of kettlebells failed to be beneficial.

When an exercise feels “different” as you do it, you can be sure that new development is likely from it. This is one of the advantages of using various types of equipment. Kettlebells provide resistance from a different angle than dumbells. Furthermore, because of the leverage involved, in certain movements, even though less weight is utilized, kettlebells will definitely build more shapely muscles and impart a more perfect appearance to the average bodybuilder, particularly in the wrists and forearms.

Kettlebells have always figured heavily in my own training. My pupils are also encouraged to use them. Not all gyms, however, have graduated pairs available for use. Generally the spheres are hollow and may be loaded with shot. Most likely any you have seen around were imported from Germany, where they have been popular for many decades. A pair of standard adjustable dumbbells may be quickly converted to kettlebells with the use of a pair of York revolving kettlebell handles ($2.00) per pair, plus postage – see p. 47), or if you are handy, a pair of handles similar to the handgrip on a scoop shovel might be easily out together and used.

Kettlebells lend themselves to versatile application and may be used to exercise all parts of the body. In this article, however, I will limit myself to the description of my program for the arms and shoulders. A second article will cover the other parts of the body, while a third one will be devoted to the use of these novel weights in various strongman stunts.

The first movement is the press. Bring the bells from the floor to the shoulders. Before starting to press, turn your hands in, that is, bend the wrist so that the forearms are flexed, which permits the kettlebells to rest on the forearms and prevents the weights from rolling around as you press. When the kettlebells are in position, press them alternately overhead to arm’s length. Keep your eye on the bells as you press. Do 10 counts with each hand. You may vary this exercise by occasionally pressing both weights overhead simultaneously.

Exercise number two is the lateral raise, lower from above. Commence by cleaning and pressing both bells overhead. Now, keeping the arms rigid at the elbows, lower the weights to shoulder height, keeping the palms facing up. From this position return the bells overhead through the same arc of motion to complete the movement. Repeat at least 10 times.

The third exercise is another lateral raise. This one begins with the bells resting at the side of the thighs, from which position they are raised upward and outward to shoulder level or slightly higher, knuckles up. Lower to thighs to complete the movement, and as in all the exercises in this course, repeat 10 times.

Also for the deltoids is the next movement, the forward raise. Hold the kettlebells at the front of the thighs, then raise one and then the other alternately to shoulder height, elbows locked and knuckles up throughout the entire range of motion. Avoid too much body sway thereby forcing the deltoids to do the work

The fifth exercise of this routine is begun by “muscling out” the kettlebells to the sides at shoulder level, palms down. From this position bring the bells forward in an arc by bending the arms at the elbows until the two bells touch in front of the chest, the elbows remaining stationary throughout the exercise. Now reverse the movement until the weights are once again in the starting position. Refer to the illustrations for correct positions. Do 10 reps.

Sixth on the list is a compound exercise, the two hands curls and press. I always enjoy doing this one. After curling the bells to the shoulders, twist your fists and wrist so that the globes of the bells rotate outward and come to rest on the backs of the arms, from which position they are pressed overhead.

Lower to the shoulders, then slowly swing the elbows forward and allow the bells to “uncurl” to the starting position. Repeat 10 times.

The seventh and final movement is a variation of the curl. Bend the body forward on an angle as shown in the illustration, legs bent at the knees. Brace yourself by placing the free hand on the knee of the same side of the body, and keeping the elbows of the curling arm well forward, bring the weight to the shoulder. Lower slowly to the starting position and repeat. A trial will convince you that this exercise affects the biceps in a unique manner. You will not be able to use as much weight as for the regular upright curl. If the elbow has a tendency to swing back toward the body, chances are the weight is too heavy, in which case you will not get full benefit from this splendid movement.

There you have it, a good kettlebell routine for the arms and shoulders. These exercises are probably similar to what you have been doing, yet they are “different”, and for that reason ought to give you a new lift and increased enthusiasm in your quest for an improved physique.