Kirk Karwoski (b. sep 6, 1966) is widely considered one of the greatest squatters in the history of powerlifting. Many people recognize Kirk’s 1000lb x 2 squat to be the most impressive set in history.

As a child he was fat and the other neighborhood children picked on him. One day his grandfather bought him his first weight set when he was 12 years old. He began lifting weights in his basment which resulted to be stronger than the other kids.

He went to his first powerlifting meet when he was 16 years of age. He squatted 420lb benched 300lb and deadlifted 400lb in the 181lb class

From the moment when he touched his first barbell, he knew that he had found his calling in life. He used to torture himself with those weights and he loved every minute of it.

In high school he was also an all-county lineman in football and he went on to play a year football in college, but due to an ankle injury he didn’t return for his senior year. While attending high school he also ran sprints, both indoor and outdoor: 100m in 11.4, 200m in 23.2 and the 400 in 55.3.

As a senior in high school he entered an olympic lifting competition in the 198lb class where he jerked 325lb, snatched 245 and military pressed 245lb.

He decided to quite weightlifting and to devote all his energy to powerlifting. Kirk trained lik a mad man but he still placed second or third in the early 80s. Thus Kirk altered his training method at the behest of Ed Coan.

The biggest influence Ed Coan has had on Kirk was the idea that a lifter should train within his limits, devoid of ego. Over the years Kirk has learned this:

“Don’t miss training lifts and always feel like you have a rep or two left at the completion of a set. Otherwise you are training too close to the edge of your abilities and will surely hit a plateau in your progress.” 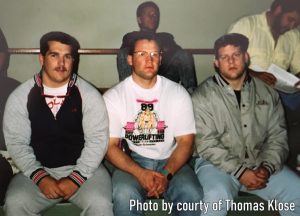 In 1991 USPF Sr. Nationals Kirk setted a 945 pound world record on second attempt and took the 1003lb for his third attempt. He pushed it but lost the balance. In 1995 he was able to break the equipped world record in the squat of 1003lb in the 275lb class. Leading up to that competition he squatted 1000 lbs. for 2 reps in training.

Kirk: “The whole weekend before the Monday that I did 1000 pounds for 2 reps I was a mess. Saturday I benched and by the time I got home, I was a wreck. I had maybe 2 meals by the time Monday rolled around. I’d had maybe 6 or 8 hours worth of sleep in two nights. I had done 890lb x 2 the week before, and it was tough. But I’d already started telling people about 1000 pounds for 2, so I knew I had to do it. Fortunately, it turned out well.”

1995 Kirk setted a new world record in the squat! One of Kirk’s heroes in Powerlifting is Ed Coan. Other lifter who have impressed him were: Eric Arnold, Mike Hall, Hugh Cassidy and John Kuc. Kirk enjoys fixing up old cars, as well as spending time with his 6 ft. boa constrictor and parrot.

According to Ed Coan he is part insane and part nut!