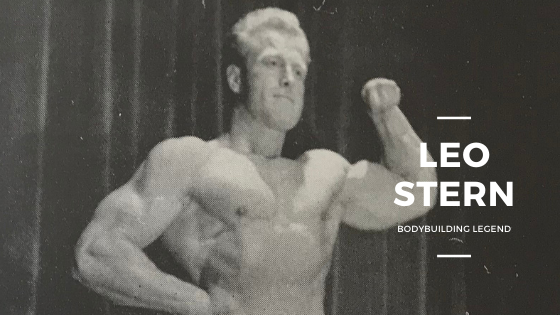 Leo Stern (1922-2009) influenced the world of bodybuilding and powerlifting. In the golden era of bodybuilding he was well known. Oldtimers will be familiar with the name ‘Leo Stern’. Even Arnold Schwarzenegger visited Leo and proved that he hasn’t forgotten his roots. Hat’s off. Here’s Leo Stern’s mental attitude and workout routine – Mr. Berg

Leo started his training shortly after graduating from high school in the summer of 1939. Previous to his start in the Iron Game he had participated in all sports but specialized in wrestling during the 3 years of high school; From this training he had developed a very medicor physique and at a bodyweight of 143 at a height of 5′ 8.5″ his measurements were as follows: Neck 14.5, biceps flexed 12.5, Chest expanded 38, Waist 30. Thigh 20, Calf 14, ankle 9 and Wrist 7.25

The first bodybuilding routines Leo followed were prepared by another very ardent weightlifting friend who incidentally became a licensed chiropractor before he reached the age of 21. Bill McCandless, the fellow acted as the scientific impetus necessary to start Leo forward on the path to greater health and strength.

After a few months of training., Leo Stern organized a club which proved very successful in promoting weight training in San Diego.

The Club – The Hillcrest Barbell Club – broke up at the out break of the war all the fellows entered the service. Leo spent his 39 months of service as a physical training instructor in the air-corps and together with his close friend, Clarence Ross organized and trained hundred of fellows who in turn are training others in the scientific sure way to radiant health and superior strength.

Leo is an example of this training because he himself started as many others, a poorly developed young man and now has been rewarded with the much honored title of the best developed athlete in California, “Mr. California”. And as an unknown, placed third in Mr. America contest health at the boys’ club of Detroit. No excuses, but Leo spent 26 days working 14 to 16 hours per day preparing to open the studio “The Studio of Progressive Health Training”.

He had about seven full workouts in all to prepare for the 1946 Mr. America and consequently did very splendidly, Leo has nothing but praise and respect for all the fellows who competed and feels that he was very fortunate to place in such a well represented contest.

Leo Stern philosophy of life and training is a very admirable one indeed. HE advocates first, self analysis as to your flaws and weakness, mental or physical. Second make out a routine incorporating exercises and habits to overcome these flaws and in competencies.

Third follow that routine with perseverance and above all balance your physique.

Tobacco, alcohol and excesses of the body are taboo and should be abstained from if the individual wants to gain the maximum from his potentialities. Health in mind, body, and spirit is the reward to you who follow these concepts.

The favorite exercises of Leo are the bench exercises such as lateral raise, bent arm pullover , supine press and also dumbbell curls while seated. He has found that lots of side bend exercises with high repetitions are the best waist reducers as well as fine for the external oblique muscles.

Leo has lots of different types of programs in acquiring his development. Some times abbreviated programs and at other times very heavy programs with many exercises depending on what he desires to accomplish at the time.

Following is one of his programs used. This as you will note is a very heavy program and of course is not for those who wish to gain weight fast but for use in bringing out greater separation and shaping up certain parts of body in preparation for a perfect man contest. It is also a fine program for training down to finer body weight s Leo often does for contests.

Anyone will have to admit that the above is a terrific workout program. The program is not the type for the average barbell man but only for those who are specializing in more separation or reducing and even then few men could stand such a program.