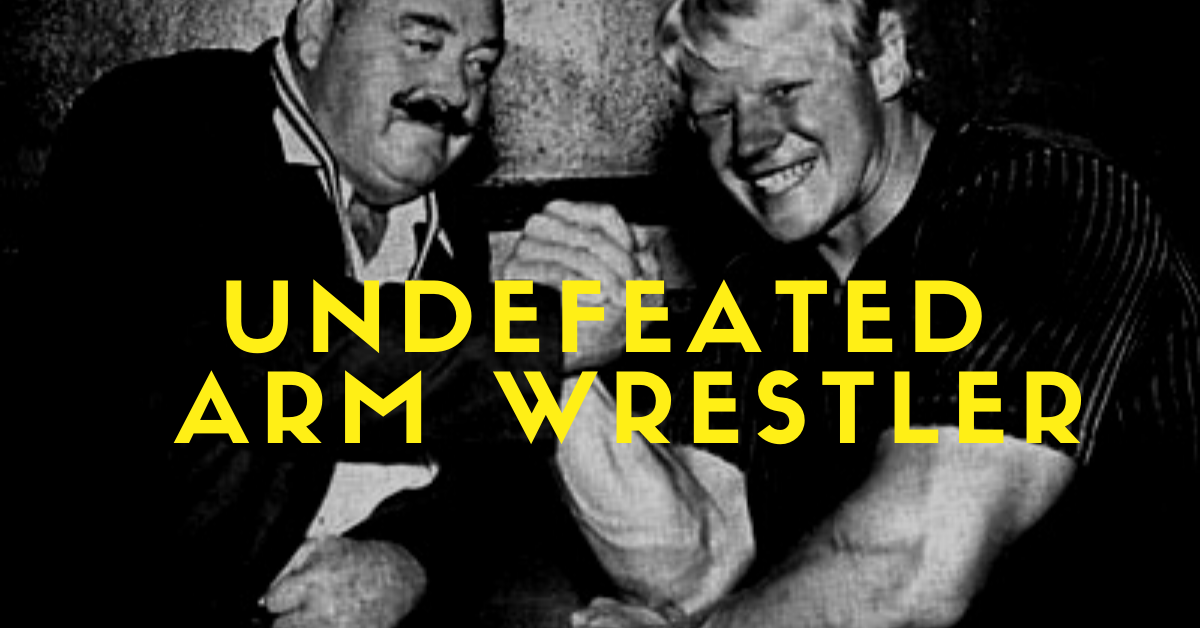 2020 will be remembered for a world wide pandemic, but in the world of physical culture the year will be known as the year of unprecedented arm strength. Whether it was limited gym access, or the high publicity that strongmen got on weekly streamed world record attempts, lifters around the world pursued documented arm strength in numbers never before seen.

If you Google best arm wrestler in the world, John Brzenk, Devon Laratt, and the Russian Mutant Dennis Cyplenkov will pop up. While it is awesome to see huge curls and arm wrestling matches on Instagram and YouTube, let us look back to a pioneer in arm excellence, Mac Batchelor.

Ian Gordon Bachelor was known as Mac. Mighty Mac was undefeated in arm wrestling from 1931 to 1956. Muscle Power Magazine from October 1956 documented that for the twenty five year period, Mac beat 4,000 opponents arm wrestling without a loss!

A 1986 Ironman magazine article by Vic Boff describes how Mac was 6’1.5” tall, weighted between 300 and 325 lbs, with a 20”neck and had 19.5” arms. A 1950 article written by Mac himself explains how he built his massive arm strength with the Heavy Barbell curl. In this article, Mac passionately describes men of that era who excelled at the curl and had the corresponding arm development to prove it.

Mac finishes the article on the curl with detailed descriptions of how he trained for massive arm power. “The handling and use of block weights and kettlebells as accessories to your Barbell training will improve your forearm and grip strength to match that of tremendous upper arm flexion and increase your ultimate in curling.” Mr Bachelor proudly stated that he was able to curl a 75 lb kettlebell with each arm by holding the bell with only his middle finger as well as being able to one arm curl a 90 lb dumbbell in the thumb up position. “With practice it is possible to stop the weight at any given point and rotate the wrist if the arm has been trained properly as a unit.”

Mac described a favorite way to train his arm power: Sit in a chair with a 100lb dumbbell between your feet, with the collars almost touching opposite ankles, palm of the hand gripping facing the body start, disengaged hand resting on the corresponding knee, body bent over. Then spin the dumbell on the floor supinating the hand until palm is forward (curl position). At this instance, curl to the shoulder as you sit up and press strongly with the disengaged hand on the corresponding knee. The original momentum from the spin on the floor brings the bell easily to the shoulder at the completion as you sit upright.This exercise was apparently an awesome assistance exercise for arm wrestling prowess.

Mac was not just a one trick pony regarding his physical cultural pursuits with arm strength. He possessed full body power that he increased by training in his well stocked home gym, performing Powerlifting based workouts twice per week- doing speed squats cold with 350lbs for 20 reps without wraps or a belt!

This type of whole body power enabled Mac to achieve the following strength achievements which were documented by strength historian Pete Vouno: shouldered a 700 to 800 lb telephone poll that was 40 feet long and walked with it for 300 feet at the Telephone Company in Los Angeles and another time he carried a 600 to 700lb small horse over 40 feet and then up a 16 ladder.

Mac’s pinch gripping strength was unparalleled, walking distance with thick plates pinch gripped that others could not lift off the ground- such as waking 30 feet with pinching an 80lb plate in each hand that was 1.5” thick.

Mac penned a 1957 Muscle Builder article specifically on how he built he world class wrist strength, focusing on 3 exercises. According to Mac these three exercises will “add inches of muscle to your forearm, power pack your wrist with giant tendons and double the present power of your grip.” The first exercise requires that you hold a weight plate at shoulder height, with 4 fingers on one side, the top of the plate and the thumb underneath the plate. With your arm locked out, raise the plate as far as you can upwards and then slowly lower it back to parallel to the ground. Do as many reps as you can strictly until you feel a deep ache in your forearm. The second exercise calls for the lifter to hold a weight plate at your side with a bent arm, 90 degrees from the floor. With 4 fingers on one side of the plate and thumb on the other side- also known as a pinch grip, rotate your hand as far as you can to the left, then to the right while holding the pinch grip as long as possible. Keep the palm of your hand and therefore the plate facing up. You can do this simultaneously with both arms or one at a time to really overload your hands and wrists.The third exercise is just to repeat the 2nd exercise but have the plate facing down for the entire pinch grip. With both #2 and 3, a circular motion with the plate really builds the wrist.

Mac suggests that the trainee start with a light weight plate such as 5 or 10 lbs. He uses a 25lbs plate.

Willis Reed, a powerfully built man and gym owner in Hollywood, California, wrote an article about Mac Bachelor. Reed described how athletic Bachelor was, able to do handstand push-ups at 325 lbs bodyweight, while playing competitive basketball and wrestling. Willis documents Mac’s best lifts as a 220 lb curl, 500lb squat, 400 lb bench press, a 700lb deadlift, and a 275lb military press with heels together- which ranked him at that time as one of the strongest men who ever lived.

Mac made his living as a bartender in one of the most popular bars in Los Angeles, with a magnetic personality that drew professionals for every walk of life who were drawn to Mac and his memorable conversational abilities. Like a lot of big strongmen, Mac died later in life while suffering from numerous health ailments in 1986 – 30 years after he had been the world wrist wrestling champion of the world. I prefer to reflect on all Mac’s strength accomplishments then to dwell on his demise which proved he was a mortal.