The mighty Mac Batchelor possessed finger grip with more power than anyone else in the world. The fact that he can open bottles with his fingers, bend the bottle-caps between any fingers, straighten the caps out again and then once more bend them along the grooves between any fingers will prove his finger power. Furthermore Mac Batchelor was able to bent 500 beer caps in 20 minutes between thumb and forefinger! 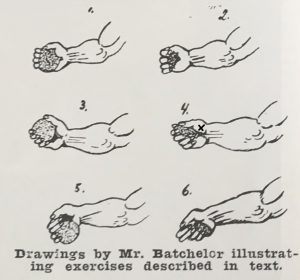 Number 1 shows the starting position, the rounded side of the one half a ball cupped well in the hand. Slowly contract the hand until a full contraction as in Number 2 is reached hold a second, release and repeat until the forearm begins to ache slightly

This exercise has a general building effect on the forearm and hand. Don’t think of repetitions in these exercises but, more of powerful contraction on what you are doing.

Number 3 is chiefly for the muscles controlling the thumb, and with steady practice will insure terrific pinching and holding ability at card tearing. This exercise helped him to build great finger strength.

Keeping the fingers stationary, place the inner edge (not the front) of the thumb against the one half a ball as illustrated in number 3. Roll the thumb inward without bedning it, to meet the fingers as in number 4. After a few repetitions a pronounced ache will make itself evident in the muscles located at the base of the thumb. Marked X in the illustration.

Number 5: it is all too evident in feats of hand and gripping strength how much weaker the little finger and the adjoining one generally are in comparison to the index and middle finger, and also the flat undeveloped state in most cases of the muscles located on the outer edge of the hand extending from wrist to little finger.

Bend the hand on the wrist sidewise (not forward) and keep in this  position until repetitions are competed, grasping the half a ball in the little finger and adjacent one, the rounded side facing the palm, clench the fingers tightly; relax and repeat until an ache prevails in the outer hand muscles with a general tiring in the two fingers involved. Now change to the left hand and continue.