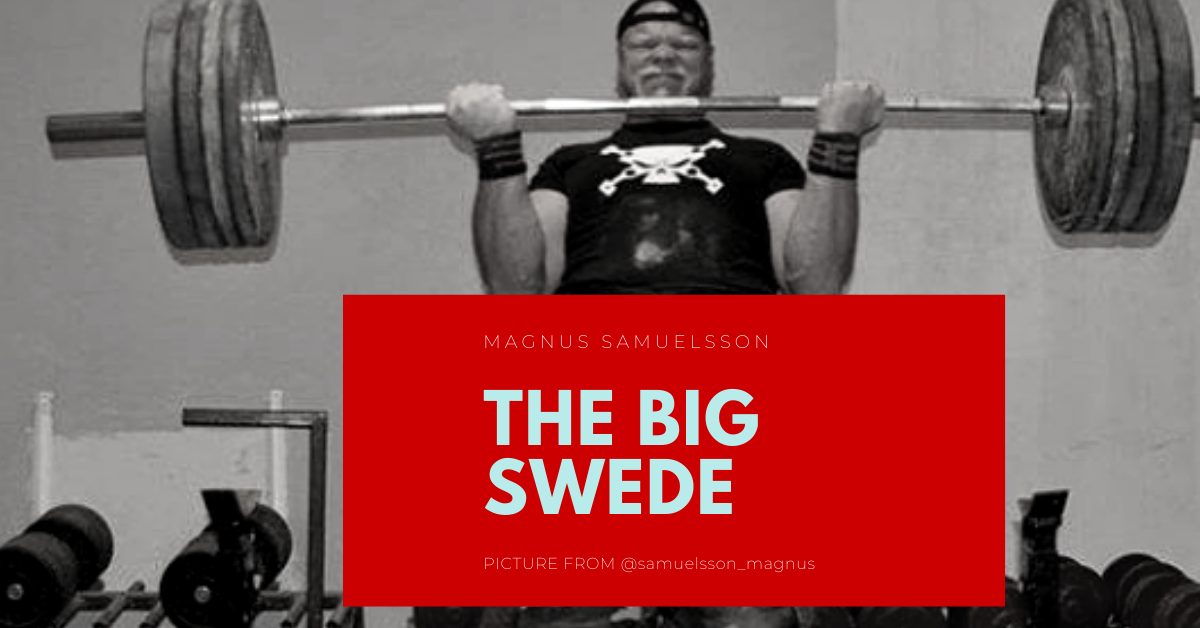 Magnus Samuelsson had one of the longest and most successful Strongman careers in the history of the sport, with his entering the world championship level contests of the International Federation of Strongman Athletes and the World Strongest Man for 14 years. Prior to his entry in Strongman, Magnus was a European Arm Wrestling Champion like his father.

He grew up on a farm in Sweden, developing an affinity for animals, outdoorsman activities like hunting and fishing. Magnus told a podcast with the Screen Chronicles recently that as a farm boy he grew up with a love for driving, guns and horses. A 1977 Trans am is his favorite car, which he still has today and he bought when he was 18. It is the Smokey and the Bandit car. Magnus has driven Dodge Cummins Diesel powered Ram Trucks for over 25 years. Magnus has done Rally Car racing in Sweden. As a youngster Magnus’ official sporting endeavors focused on track and field, rifle, and arm wrestling.

Arnold Schwarzenegger was a childhood idol of Magnus. “Everything he touched turned to gold.”

Magnus has torn both biceps, herniated L 4 and L 5 discs- but his worst injury was the complete tear of his rotator cuff. The rotator cuff fear happened as he struggled to re-rack a 400lb incline bench after he had done a set of 6 reps with.

At the turn of the millennium Magnus collaborated with WSM 2001 Winner Sven Karlsen to do a recorded workout focusing on arm and grip workouts. The DVD was called World’s Strongest Arms and it can be viewed on YouTube for free. The video is incredible with footage of Magnus curling a 308lb barbell and slowly lowering it for a muscle building effect, dumbbell curls with 90lb dumbbells, and an amazing bench press with 595lbs for two strict repetitions. I would venture to say that Magnus was one of the top 5 raw bench pressers in the world in 2000 based upon that lift and the strict style it was performed. At 6’7” Magnus had a long way to push that bar to lock out- which he did.

At the end of the DVD, Magnus’ training split is written out for the viewer as follows:

If you are worn out, take a rest day between day 2 and 3.

Just because I tell you to train with high reps doesn’t mean that you will use small weights.
Use heavy loads, short workouts, high tempo and basic exercises.
Don’t train triceps and biceps on the same day-it just doesn’t work.
Don’t over train the triceps as they get stress during shoulder and chest training.

Biceps are trained every 4th day with either shoulder or chest, alternating 2 programs.

How Magnus Got into the Strongman game as described on the Screen Chronicles Podcast:

Like many things in life it was a coincidence. He had gone with his then girlfriend, now wife-Kristine, to a bench press contest to watch. Following the benches there was a banquet, at which point Kristine was told about a strongman contest that was to be held the following day so she entered Magnus, believing it was just a way for them to get into the hosting amusement park for free. Well, Magnus won the contest, was discovered and later that same year he was in the 1995 World Strongest Man Contest in the Bahamas. At this contest Magnus broke the arm of Nathan Jones and caused a real buzz in the strength world.

On June 12, 2020, Magnus appeared on the YouTube Channel The Screen Chronicles to discus his evolution from the 1998 World Strongest Man to his acting role as Chapa on the Last Kingdom series which appears on Netflix. He answered the opening question of how he was by stating he was great and it was summer in Sweden so all is well. Magnus’s Instagram account on the first week of June 2020 showed a picture of his massive arm doing a heavy strict dumbbell curl with the caption: “Honestly! I just love life.” A few weeks earlier, another post said: “Fight fire with fire! Woke up with back pain! Time to shut up and get back in line!” This dialogue was accompanied by a great picture of Magnus conventionally deadlifting heavy and looking jacked as hell.

From television and posted interviews of Magnus you can tell he is introspective, proud, down to earth and really enjoys where he is with his life. On April 18, he posted a picture of his first Barbell, which was a gift from his grandmother with the caption: “ Found the thing that changed my life. The key to worldwide traveling and work for 30 years! That Barbell was all I needed. That together with great friends, swear, determination and a lot of luck!!” Like most top level strength athlete, a romantic view of the world and his passion have served Magnus extremely well for 3 decades.

Samuelson’s Instagram account has 50,000 followers and over 400 posts.
Magnus told the hosts of the Screen Chronicles that his Nutrition line that is based on animals because he likes animals and always has based upon his farming background. His passion for acting comes from his love of reading books. A movie called Medieval is due out soon with Magnus. Prior to that, Magnus has been involved in the creation of numerous documentaries about nature.

Magnus has competed or acted in 55 different countries, as he relates to the Screen Chronicles audience. He said that the waterfall in northern Argentina bordering Brazil was the most amazing place he has seen. Magnus goes on to say that Hungary, Budapest, Serbia and the whole “middle Europe” is a place he really enjoys. As he describes his travels he notes that America, Canada and New Zealand are also amazing. Magnus is very sincere as he speaks- he is not being politically correct, he is honestly filled with the wonder of the world.

Magnus huge, athletic body was built on up to 8000 calories per day.

When Magnus retired from competition he had to make a break from the sport for himself. He didn’t want to be on the sidelines judging or running a clock for the events. Today, Magnus loves to go to a few big Strongman contests per year for the atmosphere and the socialization. Magnus said he loved every minute of his 14 year career, qualifying for the World Strongest Man finals 10 times. He would not change a thing today.

He is trying to become more muscular all the time as well as leaner. In general, Magnus trains 5 days per week for 1.5 hours per session. His training philosophy was that the muscle needs to be contracted at various speeds. Elaborating on this concept, Magnus described that he would work a main loft for 5 sets of triples, then next workout with that exercise he would do 5 sets of 7 reps, then the third time through the rotation he would do high reps such as 10 to 12 repetitions. The idea, says Magnus, is to “ get the body to improve without destroying too many muscle cells in the process.” He has just come from the gym and said he did 5 sets of ten repetitions for the bench press Ana they were all he could do. He went on to say he then did about 14 sets of machine work and because he is now 50, he cannot do all the crazy things he did before in the gym.

Magnus described how when he was younger he would train to failure on everything and that his answer to anyone’s training question was to put more weight on the bar, “adding another plate solved every training problem.” Samuelsson went on:

“ I wrote a book (on training) and my base program was 5 singles, 3 sets of 5 and two sets over 15(reps). If you did that with squat bench and deadlift twice per week, you will come pretty far.”

In competition Magnus enjoyed the atlas stone lifting, over head press events, and the car flip. The 90s and early 2000 Strongman contests were not as uniform in their event selection and Magnus thrived in this crucible.

Magnus told Laurence Shahlaei on his podcast last week that his favorite competitors of all time were Zydrunas Savickas, Phil Pfister, and Hugo Gerard. Magnus said if he could, he would go back to being 28 years old and do it all again. Find some of these podcasts I have referenced and you will hear one of the greatest gentleman representatives of Strongman, a man who is a legend and advanced the sport of Strongman by his character and performances.