Manfred Hoeberl – The Largest Arms in The World 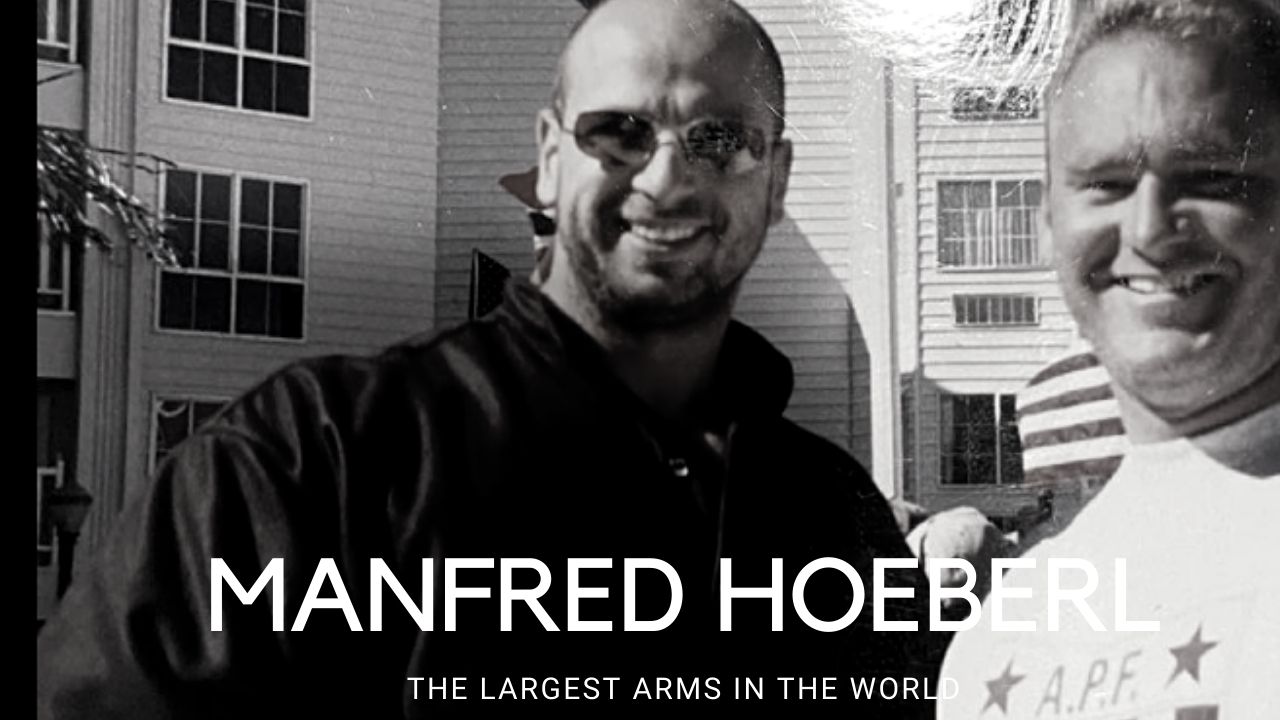 Recently I listened to the excellent podcast that Lawrence Shaleigh did on 90s strongman competitor, Manfred Hoerbel. Manfred literally burst onto the strongman scene by winning the World Muscle Power Championships and almost beating Magnus ver Mangnusson at the 1994 World Strongest Man Contest. Manfred appeared in all the major muscle magazines of that era with his million watt smile and huge muscular physique- complete with what were billed as and appeared to be the largest arms in the world. A popular book was published detailing Manfred’s arm training, that is no longer in print.

Just as meteoric as his rise, Manfred’s strongman career ended just as abruptly as he rose to fame, Manfred’s career was cut short by injuries. Manfred was born on May 12, 1964, and he reached a peak height of 6’4” and 297lbs at his competitive peak. Manfred was born in Graz, Austria the same town that gave the world Arnold Schwarzenegger. Following his rash of injuries, Manfred’s weight dropped to 220lbs.

Manfred relocated permanently to Dubai in December of 2020. Manfred likes the sunny climate of Dubai and compared the climate to South Africa, where Manfred’s strongman career began in the early 1990s. Manfred referenced that his 85 year old mother stays with him for months at a time in Dubai. Manfred said that he is extremely healthy today, his arms are healthy. After recovering from so many health challenges, Manfred developed the philosophy of be happy with what you have. “Live in the moment.” “Lifters are never satisfied.” Life is so simple said Manfred, seek inner peace and happiness. Manfred spoke so intelligently, it is no surprise that he makes his living being a motivational speaker as well as a mediation instructor.

Manfred’s Career as a Strongman

Manfred began his strength athlete first with bodybuilding training, ultimately winning Austria’s Strongest Man Contest seven times! Although bodybuilding style training was his first love, Manfred wanted to really test himself so he began training and competing as a strongman. Meeting South African Strongman legends Gerrit Badenhurst and Wayne Price, both massive men who made multiple World Strongest Man appearances. The very active strongman scene in South Africa was where Manfred cut his teeth. Manfred told Laurence he loved that the only opponent you really competed against in strongman is yourself.

After winning Austria’s strongest man in 1989 and 1990, Manfred was invited to and competed at the 1991 World’s Strongest Man contest where he debuted his most muscular physique. Manfred’s peak years competing were 1993 and 1994, during which time he came in 2nd at the WSM Contest when he lost his focus and “stupidly looked over at Magnus ver Magnusson during the atlas stone load” and this cost him the title. He wistfully remarked at the lesson he learned the hard way: “ Do your own thing and do it good. Don’t worry about what others do.”

During this time frame, Manfred competed in 40 competitions world wide, traveling with his fellow strongman to Highland games, exhibitions, as well as Strongman contests. Manfred described this period of time with a joy in his voice, stating that the strongman scene was full of strange characters who truly challenged each other in all the contested strength events. Each contest had unique events and equipment. The competitors were often surprised by what at least one or more event was.

At the height of his career, Manfred severely injured his hips when he fell asleep at the wheel driving back from the world famous FIBO Fitness Exhibition. Luckily Manfred was driving a large, Mercedes Benz sedan when he hit a tree at a high rate of speed. Manfred had to be cut out of the luxury sedan but it probably saved his life. Manfred rehabilitated himself from this injury but then tore his bicep training his favorite event, the log press. Once this happened, Manfred retired because “he did not want to rehab or hurt himself anymore.” He then focused his efforts on promoting the sport for a time.

In 2002, Manfred severely hurt himself as the result of a motorcycle crash, which left him in a wheel chair for two years and on crutches for ten more, with severe nerve damage. Being paralyzed for two years totally changed Manfred’s mental outlook to one of gratitude.

In a YouTube clip on the Strength Universe Channel documents Manfred being interviewed following his comeback from the car accident at a Team Strongman contest in 1996, Manfred told the interviewer that he would have never survived the car crash if he had not been a competitive strongman, so he loves to give back to the sport and had to come back as a way to thank the fans.

Manfred built his world famous arms with short and intense workouts, lasting no more than 10 minutes. For biceps, Manfred favored dumbbell curls and for triceps, push downs on the lat machine. “Do the movements right.” Manfred’s book was entitled 10 Minutes to Massive Arms and sold well. At the 1994 Arnold Classic, Nick’s Strength and Power YouTube channel reported that Manfred’s arm was measured at 26” after he was able to pump his arms for 5 minutes. This measurement was over 3 times larger than his wrist, making him the first man to ever record such a message. Nick’s claims Manfred’s best bench press to be 628 lbs, his best squat to be 794lbs, and a best deadlift of 860lbs. Manfred was certified in 1997 on the famous Ironmind Company’s #3 Captains of the Crush gripper, which is no easy feat.

Following being hit on his motorcycle by a car traveling at 80mph in 2002, Manfred has never lifted a weight again, per his doctors orders.

1 thought on “Manfred Hoeberl – The Largest Arms in The World”