Marvin Eder is a great bodybuilding and strength legend that is all but forgotten. He is unknown to today’s new generation, and that is a tragedy. He never gained the respect or notoriety he deserved!

He was either the 2nd or 3rd man in the world to bench 500lb/226kg. (The first was Doug Hepburn, the other man in question was Reg Park). Marvin Eder was incredibly strong bodybuilder/weightlifter and quite famous from the 1940’s and 50’s era. Even Arnold Schwarzenegger visited him in the late 60s.

The story of Marvin Eder is a stroy of hard work, of determination, of perseverence. He was born in Brooklyn, New York, Marvin became interested in both bodybuilding and weightlifting.

He found himself being picked on by other boys. He knew that he had hope of growing into a big man. His parents were small in statue, his father being only 5’5″ in height. But his father was powerfull.

When he expressed his desire to train with weights to his parents and friends, they told him that they had heard that heavy training would stunt a person’s growth, and suggested that he forget the whole thing.

Marvin countered with the fact that he had not grown in height for two years, seemed to be stuck anyway, and that he thought they were wrong in their contention that weight training would restrict a person’s height increase.

With this family objection, Marvin was not able to afford to purchase a barbell set, but none the less determined to rebuild his body, he spent several months performing chinning and dipping exercises at a local park. This same start was made by oldschool bodybuilder Abe Goldberg. He first took up dips and chins, and then went into weight training.

Marvin showed some gains from exercising and was determined to train with the weights. About this time , he learned of the East Side Barbell Club, in New York City, where Marvin lived, and he dropped in one evening. He became enthused by what he saw – the fine equiqment, the amazing developments of the members, and their kidness in showing him around and letting him try some exercises. Marvin joined right up.

Marvin made the mistake so many beginners make. He tried every exercise in the bodybuilding magazines, performed tp to 10 sets of each, and after months had made little progress and was very discouraged. 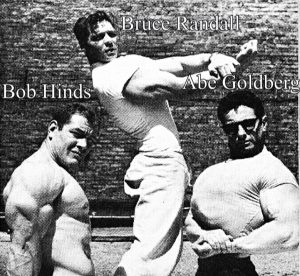 Luckily for him, Abe Goldberg, who was also a member. He noticed how Marvin was training. He talked with Marvin, showed him where he was wrong and mapped out a routine for him based on his knowledge. Results came overnight. Before the end of the first year Marvin had grown 3″ in the chest, added 2″ onto his upper arms, gained 30lb of bodyweight and grew two inches in height!

Right from there, Marv was fallen in love with bodybuilding. At age of 15, he won the Junior North America title. Twelve months after, he gained the Mr. Eastern America crown, beating the great Leo Robert.

Marvin Eder and the Bench Press 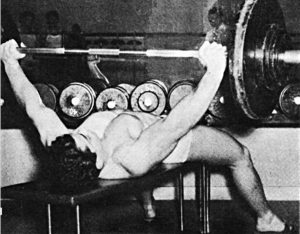 At the start, Marvin trained just like any other bodybuilder. He took his work-outs regular, followed sensible programs and made usual progress. Then one day there was a contest in the bench press.

For Marvin, this was a comparatively new habit. He had little previous experience with maximum lifting. Still, he was able to beat everyone else at the gym, making well over 200 pounds his first trial. On his 18th birthday, Marv benched the magic “400lb” mark with a lift of 410lb at the end of 1950 and entering the “Superman” class with an amazing 480lb in the late summer of 1953.

The bench press became his symbol of success. He began to practice it with real zeal and determination, starting off each work-out session with the exercise. The secret of his greatness does not lie in HOW he performs the bench press, but in WHAT this exercise means to him...

Marvin: “It was the bench press which made me what I am today”

Marvin had no spcial way of performing the bench press. He did it just like other bodybuilders, generally performing 3 or 4 sets a work-out, about 10 repetitions a set. Sometime he used  the standard grip, other times a very wide one, and still other times a narrow grip. 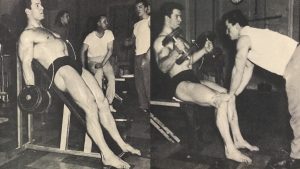 Reg Park won 1949 Mr. Britain contest then a very pleasant thing happened to him. For his 21st birthday present his parents bought him a round trip ticket to America, which gave him a chance to visit many of the states. During this tour he met and trained with such bodybuilder as Marvin Eder and Abe Goldberg.
Reg Park (sitting in the picture) trained and became friends with Marvin Eder, at that time Marvin was 19 year-old and was known as the “muscular sensation” (weighing 190lb, Height of 5ft. 7in)

Marv demonstrated various exercises and Reg was impressed by Marvin’s muscularity and also his knowledge about training.The first exercise which Marvin demonstrated was the famed biceps exercise the Zeller Curl.

Retirement
Marvin saw that no real future for lifting weights. He wanted try different kind of life. He started making business in the plumbing industry. He had no knowledge/degree but was still able to make a living. At the end he studied for his Master Plumbers license and made it with great success.
His repuation increased and even made enough money to hire employees. His beloved wife became ill and he had to sell the business and take care of her. 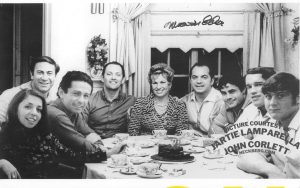 As I said Marvin was quite famous for his muscle size and strength. And even Arnold, Franco Columbo and Frank Richards (Mr. Britain) used to visit him.

Today
Marvin is used collecting oldschool magazines and stuffs around weightlifting and bodybuilding. In his early teenage years Marvin’s hobby was breeding tropical fish, and he also liked to dance – the Rhumba and Samba. He liked all sports, but was devoting all his time to bodybuilding.