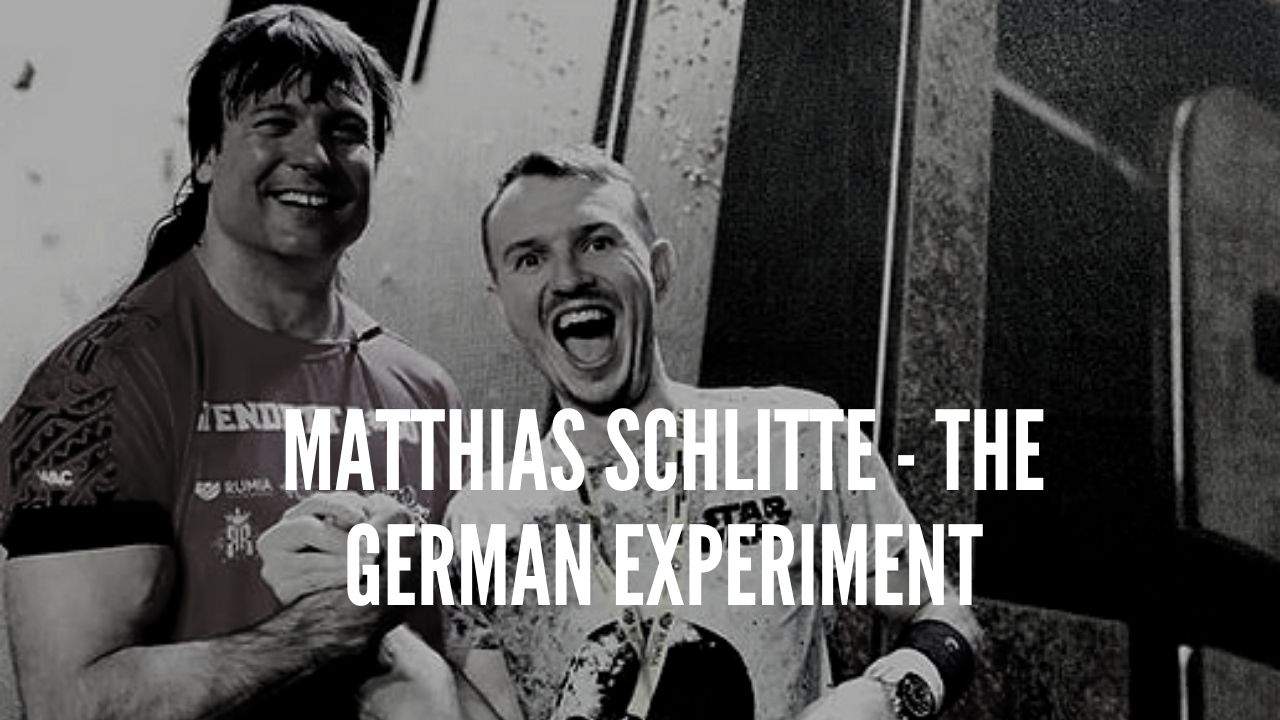 That German guy obtained his big arm, with a size of 46cm, without steroids, supplements or training! Mr. Matthias Schlitte was born with a disease called ‘Klippel-Trenaunay-Weber-Syndrom‘. Here’s a short excerption from Wikipedia:

“It is a rare congenital medical condition in which blood vessels and/or lymph vessels fail to form properly. The three main features are nevus flammeus (port-wine stain), venous and lymphatic malformations, and soft-tissue hypertrophy of the affected limb“

On the German news portal Welt.de, there’s a great article entitled “Hellboy: His right arm possesses power like a truck”. The article covers up some really interesting stuff like arm size, life and fame.

His school mates realized that he was “different”, but during break time Matthias arm wrestled against some big school kids and gained some respect, so he basically never had trouble with bullies.

But how did he get into the arm wrestling community?

It was more by chance, in 2003 his mother discovered a poster about an arm wrestling match, in which they searched for the strongest arm wrestler in his home town Haldenleben.

At that time, Schlitte was 16 years old and weighed 63 kilos, he was extremely skinny and the competitors didn’t take him seriously. But as he started displaying his right arm they stopped sneering at him immediately.

Unfortunately in Europe he is not quite as famous as in Asia. There’s an Asian TV Show named ‘Is it possible’ with 22 Million viewers. Even on the street, the people would recognize him!

How much do professional arm wrestlers make?

He appeared in many TV Shows and is known worldwide for his big arm. You would guess he is making quite enough money to pay all his bills.

In the welt.de article he said that he is getting some money from Germany’s sport-sponsor program but that’s not enough to pay the bills. Even for travelling it seems it is not enough and he has to pay from his own pocket for it.

But that’s fine with him, because he likes to travel to Las Vegas, Kasachstan, Brasilien and Malaysia. He is enjoying competing and after that, exploring the city.

Work Out for Arm Wrestling

There’s a great Youtube video sponsored by “Trimona Sport Products” in which he explains his training. It seems he built his own home gym with arm wrestling equipment.

At timestamp 00:50 he explained that hammer curls are important. He is using two kinds of technique. At first, he attached some fat grips to them. With fat grips you have a greater diameter and this will train your finger strength. And then he is just hammer curling.

The second technique: he said that during arm wrestling it’s important that the forearms stay near at the upper arm. Thus, his favorite second exercise is the preacher bench curl (without fat grips).

Very interesting is the timestamp 02:35, in which he explains his special technique: “if you don’t have enough energy to curl the dumbbell in a full range of motion, then hold it for seconds and use your upper body to curl. Don’t bend your back”

He has some trouble finding strong opponents for exercising, so he built his own opponent. At the timestamp 02:55 he is showing his self-made construction. It’s just a normal pulley system with different kind of grips/weights and a rope made out of cotton.

At the timestamp 03:30, he starts exercising and explaining. With his left arm he is holding the role, keeping a solid stand, elbows on the cushion and then he starts to pull his “opponent” to his left side. He said: “I don’t pull straight-forward, it’s more pulling to my corner. During the pulling the role will rotating too, it’s great because it will train your wrist power”

At 04:09, there’s a training partner from the German club “VFL Wolfsburg”. He is showing the most important arm wrestling techniques!

Now your leg position is important. He is arm wrestling with his right arm, and thus his right leg will be placed forward. Just go the time stamp 04:34 and you’ll see his foot position.

According to Mathias, the range of motion should not be a straight line. Pull your opponent to your corner!