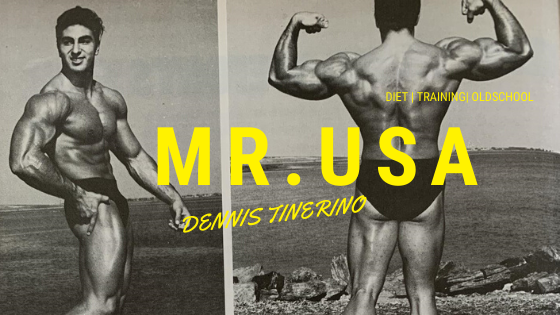 The following article was written by Joe Abbenda around 1966. Dennis Tinerino is a great legend! He won the Mr. USA, Mr. America (1967) and  Mr. Universe title in 1968 (competed against Jim Haislop and Frank Richards!) In this article you will learn how Dennis trained, ate and lived. – Mr. Berg.!!

“The overwhelming choice of the judges for the 1966 Mr. USA title was 20 year-old Dennis Tinerino. And judging by the applause, happy and smiling Dennis was certainly the audience’s favorite. However, it was no easy victory as the runner-ups, Boyer Coe, Jim Haislop, and Ken McCord, would provide competition for the world’s best. But Dennis had made great progress since winning the Teen-Age Mr. America title the year before and still more impressive gains since his sixth place in the 1966 Mr. America contest.

How does one just out of his teen-age years manage to make such progress? This is the question that this story will help to answer. Frankly, such development for one of such a young age is quite uncommon.

The matured physique takes many long years of hard training to perfect. There are those who would say that “super training secrets” are responsible. However, Dennis’ “secret formula” can be summed up as a combination of certain natural advantages, a sensible nutritional program, and most important of all, lots of sweat. Having trained with Dennis the past three years, I can attest to the foregoing “secret formula.”

I have trained with many of the top physique stars both past and present, but I have never seen anyone train as hard, heavy and with such determination as this young man. Dennis’ natural advantages consist of broad shoulders and clean cut muscularity.

His mid-afternoon snack is about the same as his mid-morning snack and his evening meal is basically the same as his noon meal. Before retiring at night, Dennis has another small snack built around some protein food. A high metabolic rate makes it necessary for Dennis to consume such a large quantity of food.

Workout
Dennis’ workout are not long in comparison to many of the other top physique stars, but they are very intense. He trains five days a week, each training session taking 1 1/2 to 2 hours to complete. Routines are changed every five or six weeks and some days he does just what he feels like doing. Very often Dennis includes “extra exercises” for some weak area in addition to his regular training.

It is interesting to note that this is the system of specialization that John Grimek recommends; go through your regular training routine and then do a few extra exercises for the body parts that are below par.

A willingness to work his weak points is one of the main reasons why Dennis continues to improve with each contest he enters. As Dennis puts it, “Every physique has its weak points and I have been trying hard to improve on mine. I am out to improve my weak points and be just a little more improved with every contest I enter”

Just talk with physique judges that have had a chance to see Dennis in competition during the last couple of years and they will testify to the fact that Dennis does improve with each contest.

This past year Dennis built his training routines around improving his back – especially the lower part, arms, calves and thigh bicep. Dennis constantly endeavors to make each and every repetition and set he does count.

On Monday, Wednesday and Friday he will train his back, shoulders, arms and calves. On Tuesday and Thursday he exercises his chest and legs. He does waist work every workout.

Dennis is strong and has done a 420 benchpress in perfect style, 475 full squat, 410 front squat, and parallel dips with 200 pounds. His routine is as follows:

This is the routine which Dennis used until about a month before the MR. USA contest when he altered his routine to include the three Olympic lifts.

Dennis decided to include the three lifts in his program for a number of good reasons. First, it was the fastest way for him to gain five athletic points in physique competitions. Secondly, it would be the best way to improve his upper and lower back development. With the help of Morris Weissbrot, Dennis quickly caught on to the three lifts and became a squat style lifter almost overnight.

Within weeks he totaled the necessary 835 for his athletic ability points.

Since the Mr. USA victory Dennis has continued lifting and has been quite successful. To date he has lifted in only three meets, emerging the victory int he heavy weight class on each occasion. He also won the Best Lifter award in a development meet, being the first heavyweight ever to win this ward in these contests.

Some lifting for someone who devotes most of his time to bodybuilding exercises. He hopes to make these lifts within this year. For those interested in measurements, at present writing Dennis has the following measurements at 220 pound bodyweight: 19 1/4″ arms (20″ pumped), 52″ chest, 27″ thigh, 18 1/4″ calf and 33″ waist.

Dennis is an electronics bug, both as a hobby and profession. He is employed by the Kollsman Eletronics firm in Elmhurst, Long Island, as a calibrator in the avionics division. Dennis has a well balanced attitude towards life and is always interested in increasing his knowledge of the world around him.

He is also willing to lend a helping hand. On many an occasion he has given his own time to give exhibitions in the New York area to promote physical fitness and weight training.”