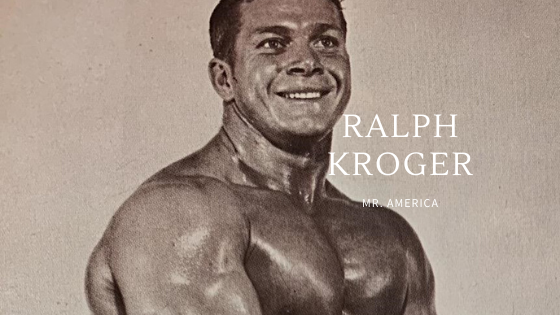 “A new bright star has risen in the athletic firmament over California skies. He is an inspiration for all who admire powerfully muscles physiques and for those who read about personages who do things. Ralph’s heavily muscled body should become an incentive for others who are striving for a heavier physique such as this athlete owns. Muscles, as you know, should be more than anatomical studies for admiration. They should be filled with fine power as well as with flexibility so that the muscularity becomes more than merely “lumps and bumps.”

He has been using weights for five years and intends to keep right on with training until he becomes a winner of a top physique contest. He works hard at his training, too. His average program consists of 15 sets with 5 to 15 reps for each exercise. He works out six times weekly using the split system.

Besides owning well developed muscles, Ralph Kroger has great power. This was proved by his winning feats in the 1963 Pacific Coast weightlifting division when he did 315 press, 285 snatch and 365 clean and jerk for a total of 965.

He has also officially squatted with 540lb., benchpressed 400lb., and curled 185lb. These achievements are a criterion of his power.

He has always been keenly interested in physical activities even during his high school days when he participated in football, basketball and all track activities. He was awarded honorable mention for All-State football in both his junior and senior years at the Cottonwood high school in Cottonwood, Minn., where, by the way, he was born.

Even though he was exceptionally athletic during those school years, he was far from being even near the muscular specimen he is today, as his bodyweight then was but 150lb.

As soon as he graduated from high school, Ralph Kroger enlisted in the U.S. Army, serving as a paratrooper. During his three years of Army service, he made 25 parachute jumps. IT was while in Uncle Sam’s service that he became interested in weight training.

Upon his discharge from the service, he moved to San Diego, California. There he was introduced to Maylen Wiltse, the gym owner, who quickly proceeded to train Ralph at his La Jolla Health Studio. Ralph made good progress and it wasn’t long before he won several California physique contests including the Mr. San Diego title.

Ralph realizes, as all should, that you must first crawl, then walk, and finally run. So he feels that he must earn victories in a few forthcoming physique contests before he would consider entering that coveted Mr. America contest of 1965. That top title beckons all of the nation’s finest bodybuilders and the competition is severe for everyone.

Ralph Kroger is an avid reader of nutritional and physical fitness books. He is also in favor of a high protein diet, consisting of lean meat, liver, cottage cheese and poultry, plus plenty of fresh vegetables and fruits. He presently eats four meals daily as he finds his system requires this amount of nourishment.

It is of interest to learn that Ralph found his legs to be the easiest bodypart to develop. His favorite exercise today is the benchpress, which seems to be usually choice of nearly all bodybuilders.

Though Ralph has been deeply interested in bodybuilding ever since he had a “taste” of it while in the army, he never tried strength tests, and so, it became both a surprise to himself and to others when he performed a power-clean with 310lb at his initial attempt at this feat.

That was the thing that caused his trainer, Maylen Wiltse, to squeeze him into his lifting team which was in preparation at the time. This team consisted of Homer Branum, Jim Ilikan, Bill Franks and Stan Levin. At that time Wiltse had no heavyweight, so he proceeded to “fatten-up” Ralph Kroger by getting him to eat five meals daily as well as train with much heavier poundages. The consequence of this food intake and heavier training was that Ralph rapidly rose in bodyweight to 235lb. After the contest was over and he had set a new record, Ralph speedily reduced to 190lb. But today he feels much netter at his present weight of 205.

In praising Ralph Kroger’s physique, let it be known that his upper back and his full, wide-rounded lats both have that “Olympic lifter’s look.” This term describes the well developed trapezius and latissimus dorsi muscles, both of which are usually prominent in all competitive lifters. And so, just as all who use weights acquire that “barbell” look, weight trainers who perform a lot of Olympic lifting readily acquire that “Olympic look.”

Not only does Ralph have fine power as well as exceptional musculature, he also possesses excellent endurance, which undoubtedly has come from his daily three mile brisk runs along the beaches.

He is one athlete who is brimming over with enthusiasm which unquestionably blossoms from his amazing energy. Such buoyant health adds much to personality, hence Ralph Kroger is always well liked wherever he goes. He never has to try to become a gentleman for he already is one.

He always has an ever-helping hand for “the other fellow” who may be in need, and he also is full of kind words of encouragement for those who are depressed. He own a character upon which hang no price tags.”