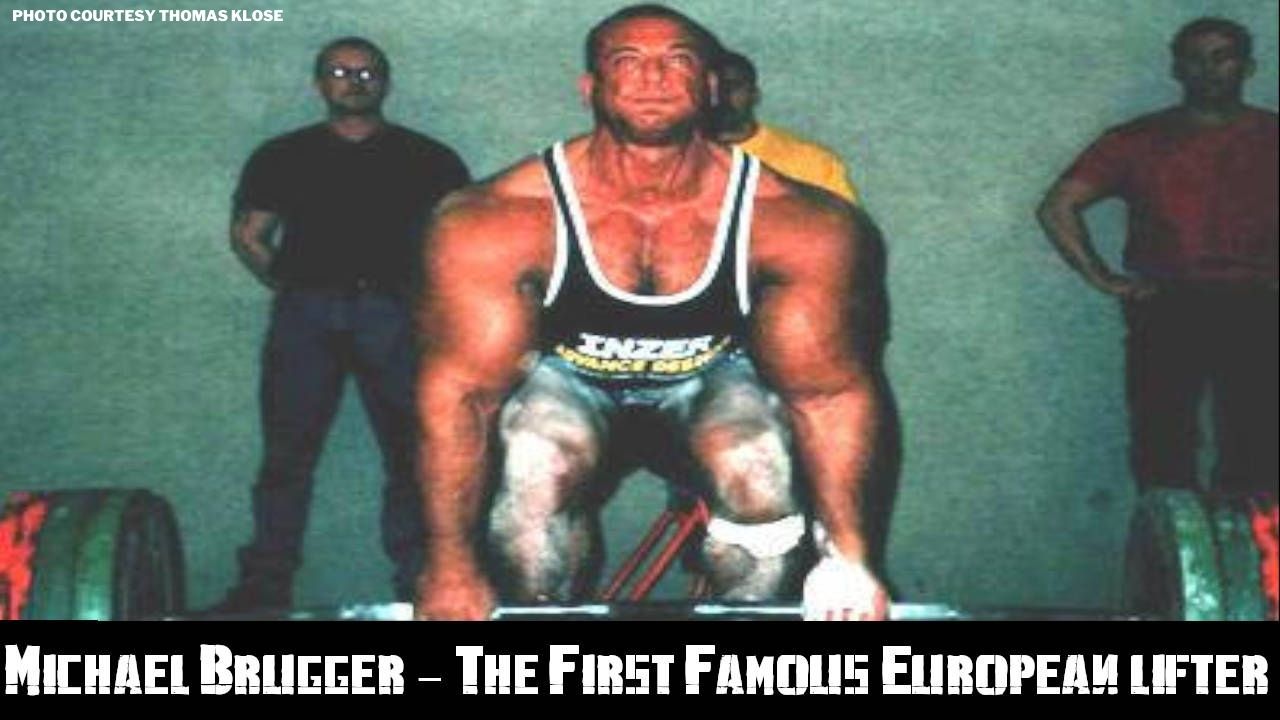 In 1991, Arnold Schwarzenegger appeared on the German TV show, “Wetten Das”. The host, Thomas Gottschlak, studied Arnold’s history and preferences carefully and introduced him as Germany’s Strongest Powerlifter… who just so happened to be Michael Brügger.

For Arnold, it was like a “king is sitting on his throne and just being entertained by his people.” …Schwarzenegger really enjoyed Michael’s strength performances and acts!

Remember, Brugger was born in an era without social media. If an athlete wanted to be featured in print magazines or TV shows, then they had to be talented… and Brugger was more than just talented!

Who is Michael Brügger?

Michael Brügger was born on November 27, 1961, in Krefeld, Germany. German strength coach Mieczyslaw Szafranski saw his potential and supported him, after which he trained at the weightlifting club Athletic Club Soest, in North Rhine-Westphalia, Germany.

In 1983, he managed to win the Junior German Championships by lifting a total of 825 kg. Later, he won the German Bench-Press Championship by bench-pressing 205 kg in a single repetition at the bodyweight of 110 kg.

Here’s a great picture of him competing against Achim Albrecht, an old training buddy of Dorian Yates. The competition was held in North Rhine-Westphalia, and Michael placed first!

I asked a close friend of his named Thomas Klose about Michael’s training philosophy. According to Thomas, “Michael has done many training programs in the run of his career. To reduce that to one program is impossible. At least, it was predominantly a mix of powerlifting and bodybuilding. I think he was inspired by Kazmaier or Sigmarsson, among others, but also by the weightlifters since he met Rolf Milser early on in South- Duisburg. Mieczyslaw Szafranski inspired him to start with powerlifting. Through this, he got to know many top lifters early, also internationally, but he also had contact with the Krefeld bodybuilding scene from the beginning.”

Michael passed away at age 47, but the german powerlifting community didn’t forget him. I found an old thread with great memories!

From “Mozilla”: “Hello, everyone. The news of Brügger’s death has shocked me very much. I saw him for the first time at FIBO in Cologne, 1994. Pure power. Nobody in the weight-training scene impressed me more than Michael. This incredible power, coupled with a sensational physique. I still cannot believe that he is gone … Brügger was in our studio once, guest star, so it was possible to take a few pictures. The helper in the checked shirt is me. Deadlift without warming up, with 350 kg, bench-press in repetitions with 230 kg. At the FIBO back then, Ted Arcidi also gave a show and pressed 5X 245 kg. To shorten Ted’s long breaks for the visitors, Michael Brügger got on the podium and pressed 12 X 200 kg in a t-shirt without warming up. Afterwards, he showed impressive double biceps. I talked to him several times. Brügger was exceptionally friendly and always gave good tips. The sport of powerlifting lost a unique athlete.”

From “olli45”: “I am very proud to have had Michael as a friend. We had many good conversations, which always had depth. He was an enrichment in my life, and I am proud to have lifted with him in the ‘80s. He will remain unforgotten. This gap he leaves behind will be impossible to close.”

From Thomas Klose (3): “But what always impressed me the most was Michael Brügger. Since 1983, I was present at almost all of his great achievements. Unforgettable was the National League fight in Spring 1989 in Hessen, Germany. Michael was the first German to total 1,000 kg. A historic moment more than 30 years ago. To be able to experience him during training or guest appearances was unique; eight repetitions with 220 kg on the bench without warming up at National Championships. Quite brutal! His technique and the long way made it so special. Five repetitions in the bench-press with 240 kg. He mastered in his best time around 1990. Quite sovereign. All without a bench-press shirt, so raw power. He pressed heaviest weights always with a certain elegance. He mastered the iron! Even in the deadlift, he was still able to accelerate the barbell at the top. 350 kg for three repetitions looked easy for him. 400 kg, he pulled around 1994 at the FIBO.” (3)

Author’s Note: My German magazine archive is lacking material about Michael Brügger. I know Sport Revue and Sport & Fitness used to interview him, so if anybody is reading those and owns some files, then I humbly ask you to send me an email at neckbergcom@yahoo.com! Thanks.