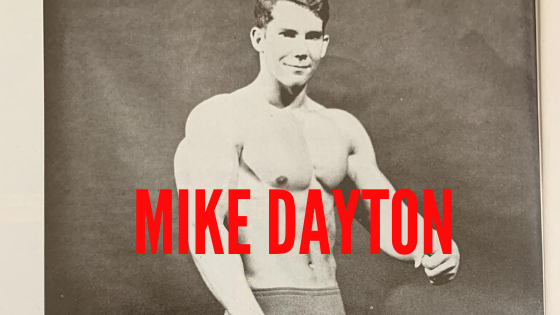 Mike Dayton won the 1967 Mr. Teenage America Contest. An observer described him as “the kind of boy I’d trust my daughter with.. you can tell by looking at him, he is a real clean-cut type.

Good height, a clean-looking, youthful face, a charming smile – all these helped Mike in his win over broad-shouldered Joe Distini of New York (second place) and muscular Val Cimo (third place and Most Muscular) of Chicago. 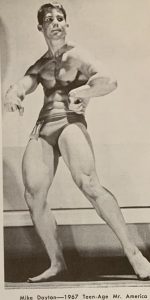 The win climaxed four years of hard training for the 18 year old Mike, who trained under the personal supervision of Jack Dillenger at Dillenger’s Gym in Oakland. Mike had previously won two other contests, “Best Built Teenager in California” and “Mr. Teenage California.”

“Building a good physique requires a lot of hard work and time,” said Mike, “no matter what system you use.” Mike prefers to work one body part at a time, doing multiple sets of two to six exercises for each part, and pumping it thoroughly before moving on to the next part.

When deciding which body part to work first, Mike always selects the parts most in need of development, working them first and the better developed parts last.

“This is the only way to get balanced development,” he added.

Mike trains six days a week working his lats, deltoids and chest on Mondays, Wednesdays and Fridays and his legs and arms on Tuesday, Thursday and Saturdays.

He works his abdominals every day. Unlike most bodybuilders, who change their entire routine periodically, Mike keeps the same general routine and just switches an exercise whenever he goes stale on it. He usually alternates one exercise with another.

For example, when working his deltoids, he will do a set of presses behind the neck, a set of seated dumbbell presses, another sets of presses behind the neck and so on until he has done six sets of each. In the following routine, (which lists the exercises Mike uses more than any others) asterisks are used to indicate the exercise Mike groups together. 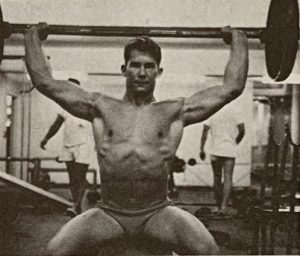 Mike backs up his ultra-strenuous workouts with plenty of rest (a solid nine hours each night) and wise eating habits. When bulking up, Mike never lets himself go hungry.

“As soon as I feel the least bit hungry, I stop whatever I’m doing and get something to eat,” said Mike.

“If I happen to be near a supermarket, I go in and buy a quart of milk and go someplace comfortable and drink it.”

Typically, Mike eats six meals a day, mostly small ones which don’t leave him bloate. In between breakfast, lunch, supper and bedtime, he whips up a nlender beverage..made with milk and a variety of supplements.