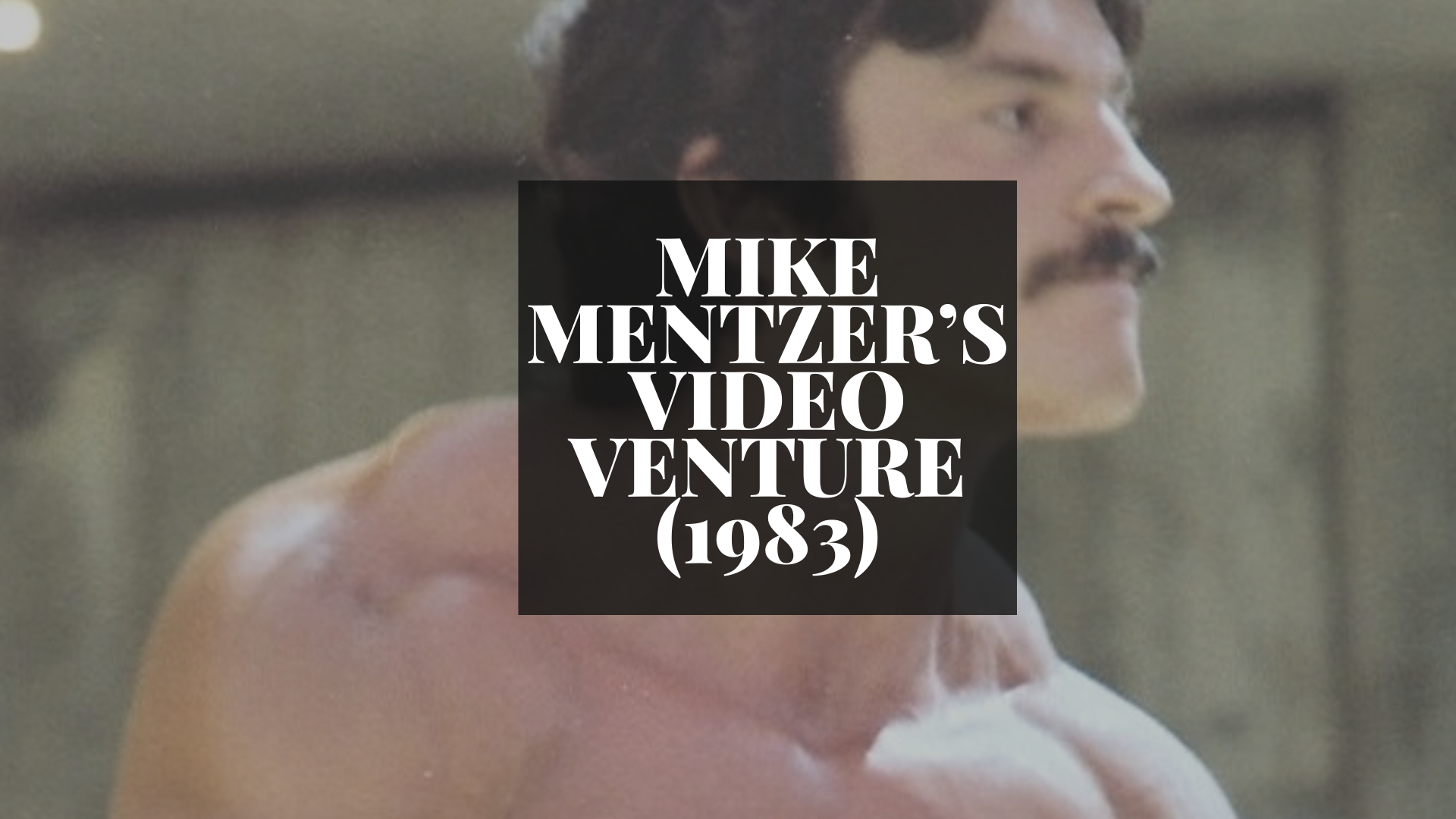 Ms. Hause allowed me to publish the great and historical article on neckberg. Thumbail picture by John Corlett, edited by neckberg.

After a particularly exhausting day at work, I am in bed, halfheartedly watching television. The phone rings, and the voice at the other end is Mike Mentzer’s. His normally calm, well-paced words are rushing out in a torrent, so quickly that my tired brain can barely absorb them.

Traffic isn’t bad on the way to Venice, and I make it to Gold’s Gym in 40 minutes. The gym is closing for the day, and as I walk in, I see that cameras, lights, light diffusing screens (“silks”), and a videotape production crew fill the back half of the gym. Countless electrical cables jumble across the floor and disappear out the back door. I hear a disembodied voice booming over a loud speaker, dispatching orders to the crew.

An obliging man tells me that Mike is in the back parking lot inside the control van, which has “Telemedia Productions” painted on the side. As I step into the van, I am overwhelmed by all the flashing electronic equipment, which seems magical to me. I remark that I feel like I’m stepping into a CIA spy truck. A man turns around, gives me a scornful look, and with sarcasm dripping from his voice, says, “You’ve been watching too much TV!”

Perhaps so, I think, but I am bewitched by the numerous video screens, audio and video control boards, and the recording and editing equipment.

I greet Mike, and he quickly introduces me to his business partners, Jay Stevens and Dimitri Logothetis. Dimitri is directing the taping of A Look at High Intensity Training, and it was his voice that I’d heard issuing commands over the loudspeaker when I’d entered the gym.

I decide that the talents and interests of the three owners are the perfect blend for creating top-notch training tapes. Dimitri, with a master’s degree in film and TV directing from Loyola Marymount University, has had several years of experience in facilities management and program development with Communicom, the largest cable TV company in Los Angeles. He’s also the winner of the prestigious Samuel Z. Arkoff award for his short film, Call Me Kaiser.

Jay’s ten years of experience leans toward the technical side, which seems natural to me, since he has an engineering degree. Just before coming to Telemedia, Jay was a project engineer for ABC-TV, helping create the control board which will be used to cover the upcoming Olympics.

And, of course, I already know that Mike Mentzer is the walking encyclopedia of bodybuilding.

What a trio, those three!

Mike is extremely enthusiastic about his new venture. “We’re doing it all — producing, directing, everything! The time for this couldn’t be better. Bodybuilding is booming, videotape sales are booming, and we’re putting the two together!” He tells me that the videotapes will initially be marketed through mail order in bodybuilding magazines, with expanded marketing already being planned. Telemedia will also soon be producing tapes on exercise, fitness, and the holistic lifestyle, plus tapes for and about other bodybuilders.

The monitors in the van reveal that inside the gym all the lights have been adjusted and the cameras are in place. Dimitri announces that we are ready to begin taping, so I return to the gym, carefully heeding Dimitri’s orders that onlookers should stay out of camera range.

Ray Mentzer, wearing a yellow Gold’s Gym tank top and blue shorts, does eight reps of chins while three cameras focus on him.

The cameramen get instructions from Dimitri to reshoot chins. Ray responds with eight more reps. After he finishes his second set, a crew member moves a pulley handle that has intruded into the picture. The voice on the loudspeaker says to turn off the house lights because they are making the picture green. Ray does seven more reps of chins.

The voice announces that pullovers are next. Ray says, “There are ten different kinds. Which do you want?”

Nautilus wins, and the lights and silks are moved next to the Nautilus pullover machine. This moving of lights and silks seems to occupy most of the evening. Relaxing briefly, a guy from the crew sits down on the press-behind-the-neck machine and says, “This is the kind of weight machine I like. No weights, and a place to sit down!”

It is just about time for Mike’s fiancée, Cathy Gelfo, to go on camera, and I go to the dressing room with her for some girl talk while she gets ready. I comment on her skill at hair styling and applying makeup for the camera.

As we leave the dressing room, Mike is in front of the cameras doing pullovers on a squeaky Nautilus pullover machine. I notice that Tom Platz, Roger Callard, Jerry McCall, Pete Grymkowski, and Tim Kimber are now among the group watching.

The voice booms, “Lat pulldowns, Ray and Cathy!” Again the slow process of moving and adjusting cameras, lights, and silks. I would never have the patience for these never ending set-ups.

A middle-aged man well on his way to becoming a dirty old man raves endlessly about Cathy’s striking multi-colored leotard. Lights are still being adjusted and meter readings are being taken. One of the crew comes over to me and asks if he’ll be mentioned in my article. I ask, “What is your name?”

“Richard Karzen,” he replies and spells it for me.

While waiting for the next set-up, I kill some time by going back out into the van. Someone remarks as several people are crowding into the van, “This truck just isn’t designed for bodybuilders’ shoulders!”

Dimitri is sitting at the control board, talking into the headset, telling the cameraman to have Ray and Cathy use less weight so they won’t wear themselves out before the shooting is finished.

Ray snaps, “We have to use weight to make the movements look natural!”

I go back into the gym and hear the voice telling a member of the crew to move a weight rack out of the way. The guy wails, “Me and what other nine guys?”

“Well, then move the walls!”

They decide that “weight clutter” looks natural in a gym and leave it where it is.

Sheila Scannell, the stage manager, is standing in for Ray as the lights and silks are adjusted for toe raises. As Ray takes her place in front of the camera, I return to the van. I can see on the monitors that toe raises are going to have to be retaped because the exercise is being shot from a bad angle. Ray does the toe raises again.

Mike tells me that they spent 12 hours the previous day taping the narration for A Look at High Intensity Training. “We did the opening scenes, the interviews, and the voice-overs at our studio in Hollywood. It was extremely stressful for me to keep a straight face and retain my focus for that length of time. As the end of the 12 hours drew near, there was so much horsing around and joke-telling that we were actually rolling around on the floor laughing!”

Mike is called away, so I go over and introduce myself to Ray. Although I met Mike five years ago, I’d never met Ray. I ask him if he is enjoying making the videotape and comment that it seems like a long, tedious business to me. He emphatically states, “It’s better than sitting home watching TV! I’m bored with TV! But I’ve been fighting the flu all week, so doing this is a lot more demanding physically than it normally would be. But I feel an element of joy because I’m part of a team that’s putting together something constructive. I think about all the time I’ve wasted in my life just partying!”

Ray is called to start the Scott curls sequence. I look over and see a group of men sitting around with a deck of cards and talking about food, comparing the vast quantities that various bodybuilders are capable of consuming. Tim Kimber starts joking about buying an orangutan and training it to do promotionals for Gold’s Gym. Tim leaps to his feet and snaps into a Mike Mentzer leg pose, saying, “Can’t you just see the orangutan doing a Mentzer leg pose?” Much laughter.

“And how about a Roger Callard back shot?” More laughter. The conversation continues with a discussion of how much chimpanzees and orangutans cost and how Ray is getting ready for his next contest, Night of the Champions.

Ray is feeling the effects of the flu while performing flyes supersetted with bench presses, with Cathy assisting on the forced reps. He sweats through a second take on flyes and benches. The strain is apparent on his face, and the consensus is that this will not be detrimental, but will simply add to the “high intensity” mood of the tape.

The director complains that shooting around all the attached-to-the-floor equipment is like working on an obstacle course.

Roger Callard is telling a story about when he was in Birmingham, Alabama, making Stay Hungry.“The director was screaming over his megaphone, ‘Please do not touch the bodybuilders!’ People were rushing us, even scratching us!”

Mike attempts to do triceps extensions, but concedes that he can’t because of very sore elbows, adding, “I’d be embarrassed to do them any lighter!”

Ray fills in for Mike. He’s exhausted and, after a couple of takes, says, “That’s it for me on this one!”

Now it’s time for Cathy to do behind-the-neck presses. She freshens her lipstick and combs her hair. After the presses are taped, she tells me, “I sure wish I hadn’t worked my delts earlier today! It was really hard getting through that!”

The clock is nearing 11:00 p.m., and I have to drive home and face work the next morning. The crew is getting tired. One cameraman makes a ghastly face and moans, “I need a glass of water or I’ll go mad!”

As I say my goodbyes, the crew is setting up their equipment around a Nautilus machine. I wonder what time the taping will finish. Heading down the freeway, I feel a real sense of anticipation, waiting for the phone call to come see the finished product.