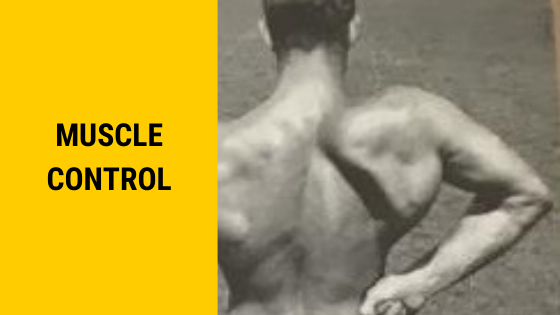 The following muscle control course was developed by Ed Jubinville around 1960. He is rated as the world’s greatest Muscle Control expert! – Mr. Berg

“This is the first of two articles on impressive shoulder blade controls. If you have never witnessed a Muscle Control artist in action, you are missing what is considered by most muscle men as the pinnacle of sheer muscle display. Anyone can learn to do some spectacular Muscle Controls with just a little patience and practice. You don’t have to be as big as a house – size means nothing.

Females, as well as males can learn this almost forgotten art of controlling the muscles at will. Of course, a fat person, or a skinny one will not be able to display his muscles like a well developed and muscular barbell and lifting man; nevertheless, he can look impressive to the average person while controlling his muscles.

With weight training it will become a little easier to learn to do controls. The reason for this is that a trained barbell man is more supple and flexible of muscle and limb than an untrained man. As i describe the controls I will give exercises or movements to practice which will prove to be of great help, both in mastering the controls and increasing your muscle size and muscularity.

The best advice I can give for learning to do the controls in the quickest possible time is – relax the muscle or muscles you are going to control, you cannot control a muscle that is tensed. You must concentrate on the muscle or muscles to be controlled. Think into them and think of them as being under your power, and they will be. Once you’ve practiced long enough then this will become second nature with you and will come naturally.

Some Muscle Control artists are against the use of mirrors when learning controls, I say this is wrong. How else can you see if you are doing any control right or wrong? I’ve always practiced my controls in front of mirrors and made good progress, in fact, I still practice this way. A mirror will also serve as an inspiration insofar as you will be inspired by the progress you are making towards achieving complete mastery over a control. This in itself is satisfying – you feel you’ve accomplished something.

This will also encourage you to work harder to learn more controls. You may find that some controls are easier for some to learn than others, but all in all anyone can learn enough controls to give an impressive display if they will just devote a little time and effort to learning the various controls.

The art of muscle control is especially suited for the fellow who is called upon to do some posing. On the average, an audience gets more or less “fed up” with the same old standard poses; this is where you who have become adept at muscle control can really be impressive much to the delight of the audience.

In Illustration 2, you have the double shoulder blade isolation, which to my way of thinking, is about the most impressive control I have ever seen. Place both hands on your hips, now push down with the hands, and at the same time, try and raise the shoulders and concentrate on the shoulder blades moving out to the side. With a little practice, you will find you can move the shoulder blades simultaneously, and even learn to move hem alternately. Don’t give up if you fail after the first attempts. Just remember it takes a little patience and effort on your part, and the reward of mastering the control is well worth the effort expended.

A good set-up when practicing controls involving the back is to have a mirror in front of you, and have someone hold another mirror about a foot in back of you, about a foot overhead and titled to the angle which allows you to see the muscles you are trying to control.

You can do as I did. I have the mirrors hung handily in a small room and have a spotlight set at the right angle to give me an idea of what the audience sees when I do may muscle control act. 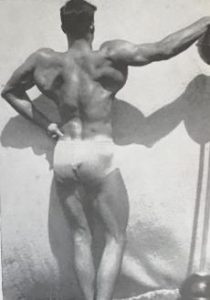 An exercise I have found helpful for these controls is the dumbbell lateral raise done while lying on a bench sideways. This exercise is done as follows: lie down sideways on a bench, hold a dumbbell at arms length directly overhead, now lower the weight past your head until it is on the same line as your outstretched body, raising it to the starting position and lowering it. Three sets of 8 reps, each side, is plenty to really start pulling the shoulder blades out and helping to loosen them. Continued use of this exercise and practice of the controls, will help you master these very impressive controls.”