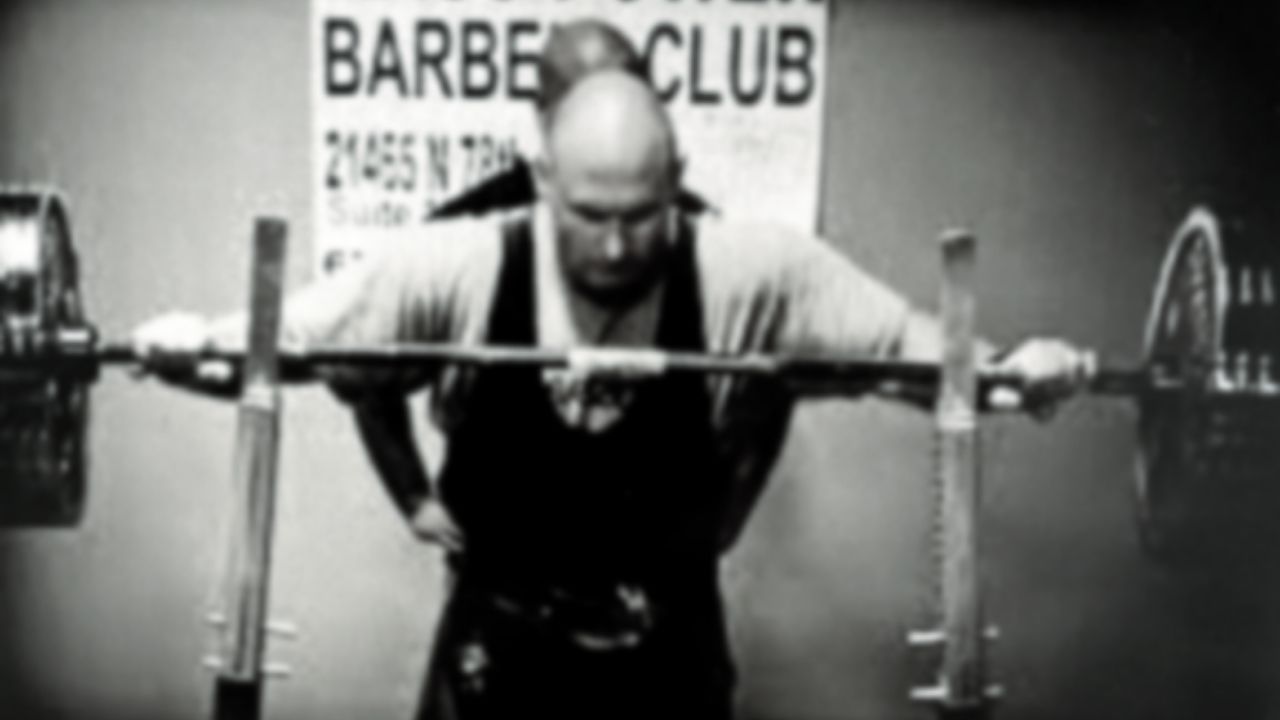 In approximately 1988 I first read about Louie Simmons and the Westside Barbell Club Ohio in issues of Powerlifting USA. I read anything I could get my hands on about getting stronger then, but I did not follow or apply any of the principles Louie discussed in those late eighties issues. I trained traditional linear periodization and my best lifts increased from 1250 to 1600 in four years, with a squat of 615, bench of 380 and deadlift of 650 in competition.

My then girlfriend had bought me the Westside Barbell tapes for Christmas 1993. As Louie Simmons has said many times, in the beginning all he had was a power rack, an AM FM radio, and the Powerlifting magazine articles of the time. I would train max effort bench with Powerhouse Gym in Chatsworth on Wednesdays to grab a spotter but no one in my life then was serious about training the squat or the deadlift. My boss at the time was in a serious midlife crisis mixed with delusional tendencies of which I was the benefactor because he purchased great equipment to train with at the office where we worked. I had 24/7 access to a Texas Power bar, 700lbs in plates, a squat stand, and a box to squat to.

As the youngest guy in the office by two decades, my co-workers would clear out by 5 to the life I know all too well now, kids activities or Home Depot runs for the latest Chinese plastic piece for my house that has surprisingly broke. I would have a snack, psyche up and set up the equipment in the 400 square foot main office. My workouts soon became ten minutes of terror as I would complete the dynamic effort box squat for ten or twelve doubles while I counted a minute between sets. As Louie has written, when you push your sets with little rest-you recruit dormant muscle fibers to get the job does. This lactic acid tolerance type training naturally raises your growth hormone level resulting in fat being burnt off and connective tissue being strengthened. I would squat to a below parallel preacher bench seat for my main dynamic effort squats with varied stances from close, medium, or wide.

At times I would do additional sets of squats with a very wide stance to a 10” milk crate for doubles. Remember I am 6’2” so this was quite the range of motion for my hips and entire posterior chain. Could that be why I am still training hard 25 years later? I followed Louie’s recommendations the best I could with very limited equipment after my squats. I would do bent over good mornings, primarily for triples but I recall doing a single with 405 then. Bent over rows were a staple as they are the 4th powerlift, the one assistance exercise that positively impacts the three competitive lifts. Abs were done by hooking my feet under sturdy furniture and doing sit-ups of various widths and leg raises with and without weights. Reverse hyper were accomplished by placing weights on an old leather lifting belt that I had cut to fit the hole on an Olympic plate and doing the reps off of a bank of 5 drawer safes.

I followed Lou’s advice to train Max Effort lower body with exercises I had never done before such as zercher squats, kneeling squats, pull throughs with a cable, and side bends. At this time in my lifting career, I had officially pulled 650 at 242 using traditional progressive overload training- whatever I could triple I could pull 60 pounds more in a meet. Louie’s articles and tapes introduced to his dynamic deadlift method of doing sub maximal singles with very short rest periods. This 5 week cycle called for 15 singles at 65% of actual max, 70% for 12 singles, 75% for 10 singles, 80% for 8 singles, and 85% for 6 singles. On the 6th week I would pull a either a training max or a do a meet. If no meets in sight you could deload- a concept I never knew of until the 2000s.

For my benching I would do the dynamic effort workout using 65 % of my actual raw max. Bands and chains were not known to me at that time. Lou schooled me on Dicks presses, Williams’ front plate raises, triceps roll backs, floor pressing for reps, and the importance of dumbbell pressing from different angles for hypertrophy work. Westside materials introduced me to Bradford presses, chest supported row work, and the need for heavy hammer curls that created forearms that allowed me to complete heavy powerlifts and later Strongman tasks. Louie also wrote about weighted push-ups for a record with different plates on your back.

In November of 1994 I decided to put my new training style to the test by doing the USPF Vandenberg AFB Open/Military Nationals. I weighed in at 260lbs and in the single ply gear of the day I went 633 407 677 for second place in the 275 lb class with my first official 1700lb total.

I met Steve Denison that day and he was a great resource who introduced me to my future training partners such as Art LaBare and Josh Bryant. My first few years in So Cal were not the lifting paradise I had envisioned when I left Massachusetts, but after 1994 my foundation was solidly laid and the best lifting years of my life were ahead.

Once I was convinced that Westside Style worked, I relocated to North Orange County for the best gym environment I could find in Southern California at the time. I had two training partners who trained with me and we all made great progress. I came in second to Steve at the 1995 California State Championships in the 275lb class with 661 413 705. Our workouts were fast, furious and productive. When I began Westside training, I immediately started doing conditioning exercises at the end of every training session. These conditioning exercises consisted of Dimel deadlifts at every session with up to 225lbs for two sets of twenty reps, often supersetted with abdominal work such as hanging leg raises or decline sit-ups with weight.

By 1996, I wanted to move up to a full Superheavy weight so I continued to train Westside style, my body just had acclimated to the intensity and pace of the training so I just added more quality food and protein and I grew bigger. I totaled my first 1800 and 1900 total that year. I came in 3rd with a 1934lb total of 733 457 744 at 296lbs at the WPC Can Am Championships in Las Vegas, Nevada. Westside lifters such as Chuck Vogelpohl, Tom Waddle, and Arnold Coleman were at the meet.

Westside Barbell take always from this article should be:

1 thought on “My First 3 Years of Westside Barbell Training”