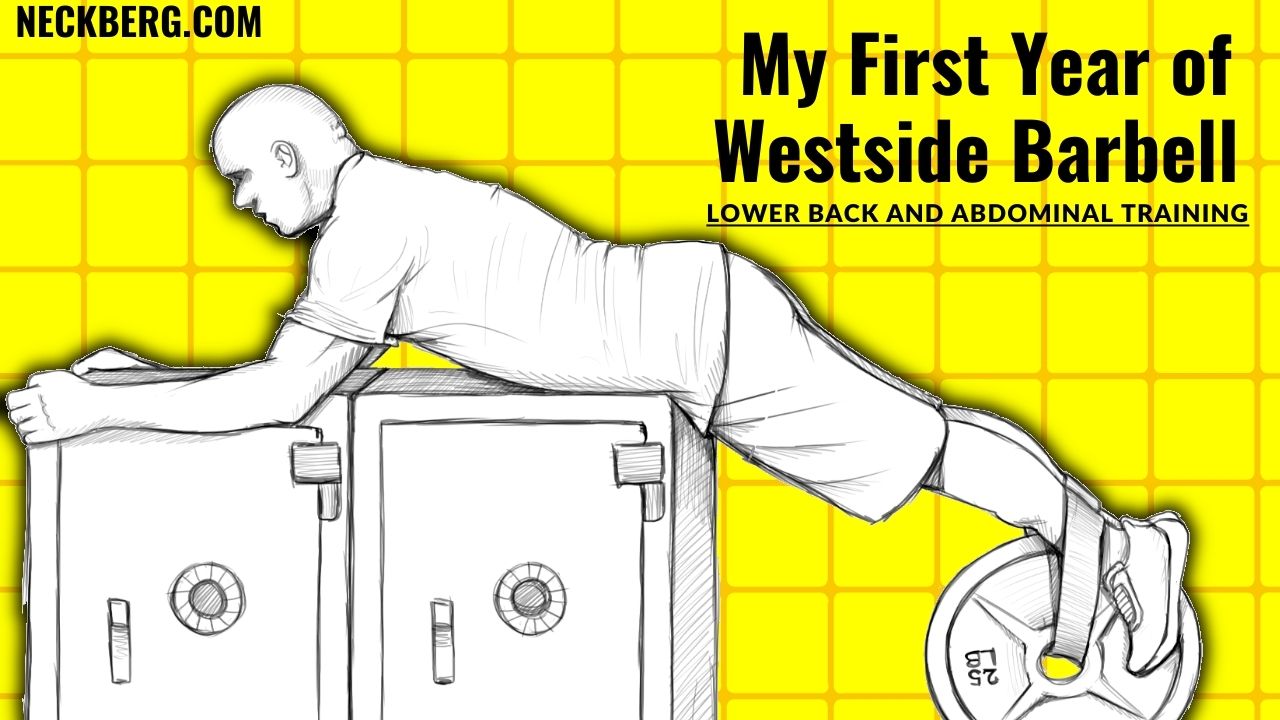 When I began training Westside style, I had very limited equipment options and a 1600lb total in 1994. One of the most important aspects of Westside Barbell System is the strengthening of your back. Louie Simmons agrees with the immortal Bill Kazmaier who said “a strong man has a strong back.” I trained in a work office that would be converted to a workout space at night when the employees went home. A boom box and Louie’s Powerlifting USA articles were my train partners for my first year of Westside training. The office belonged to my old delusional boss, who stocked it well when he wasn’t binge eating Klondike’s like a teenage girl. I had full access to an Ironmind Squat Stand, 700lbs in plates, PowerBlock dumbbells to 120lbs, a power bar and curl bench seat to squat to. With these Spartan resources I built a 633 lb squat and 672 deadlift, to go with a 424 bench I officially registered by the end of 1994.

No Reverse Hyper Machine, No Problem

When I began Westside, I realized I did not have access to a reverse hyper machine, the patented device that Louie instructed was essential for lower back strength and health. The first thing I did to address this was to take a traditional brown leather weight belt and cut it so that it could be slipped through the hole on a 25 lb plate and the buckle could be tightened around my ankles. With plates secured by my ankles, I would hop up onto a bank of 5 drawer safes and I was able to perform a reasonable facsimile of the reverse hyper movement. The weights would bang off the safes at the bottom of the movement but it did work alright given the situation.

The modified reverse hyper helped but I built my back strength by doing the following exercises. After my four weekly workouts, I would do Dimmel deadlifts, which were from the hang, with straps using 25% of my maximum deadlift. I would use between 135 to 185 for 2 sets of 20 reps in the movement, building up speed during the set- lowering the bar quickly to stretch my hamstrings and then returning to lockout explosively. I would rest 2 minutes between the sets. This resulted in my volume for my hamstrings being increased by 320 repetitions per month. Louie has said that elite sprinters would average 600 reps of hamstring work per month- so with the Dimmels and Dynamic Effort Squat and Deadlift work, as well as Max Effort lower body work, I was very close to 600 reps for my lower body per month. I would do these with 135 for 20 on upper body days, Max Effort and Dynamic Effort. On lower body days I would go with 185 for 20 reps.

After Dimmels, I would do abdominal work- specifically leg raises on upper body days and weighted sit up work on lower body workout sessions. Abdominal work was done for two or three hard sets of weighted resistance. Leg raises were often done with the reverse hyper belt on the ankles with weights attached.
Twice per week I would do side bends with the power block dumbbells for two sets of 20 reps per set with straps so that my grip was never an issue.

Janda style sit-ups were attacked on sit up day. I did these by jamming my toes under safe handles and getting my heels as close to my butt with my legs bent at 90 degrees. Then with a 25, 35 or 45 lbs plate behind my head, I would squeeze my torso off the floor and cramp the shit out of my abdominal wall.

For upper back I did bent over rows from the floor, with a power belt and straps. My goal was 3 sets of 5 reps with 50% of my deadlift. So 350 for a 700lb puller. These were not super strict nor were they cheated up. At the time, Dorian Yates was Mr. Olympia and was famous for bent over rows- yes sir, count me in.

That is the above program I did to put over 100 lbs on my powerlifting total in one year and burn off about ten pounds of pure fat that I had gained in error, before I began Westside. As Louie says, big ain’t strong, strong is strong.