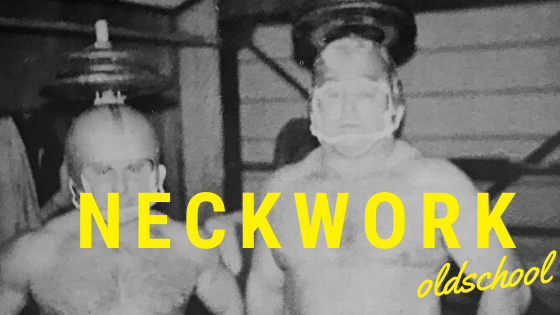 Many football coaches are aware that like the arms and legs, the neck is simply another appendage jutting out from the body which must be exercised. It must be strengthened to withstand the violent head and neck blows coming from elbows, shoulders, knees, feet, heads and the pile-up characteristic of the game.

Besides providing protection, a powerful neck is often used as an offensive weapon in “spearing” onrushing lineman. It works with the shoulder as a lever to push the opposition in the desired direction.

The report of the National Commission on Product Safety states that football players in the U.S. annually suffer from 250,000 to 500,000 brain concussion, you can imagine the strain the neck has to bear.

In 1970, 29 players were killed in football games. Most of the 29 fatalities resulted from head, neck, and spinal cord injuries. While many of the accidents are directly attributable to the inadequacy of the football helmet, one might guess that the statistics would be somewhat lower had the player sufficient neck training.

Boxer have long known the “secret” of preventing a “glass jaw”, by building a strong neck – a neck capable of withstanding blows which would easily knockout an untrained man. The neck’s girth and muscularity act as a shock absorber and cushion much of the knockout blow and consequent head snap and shiplash which causes the brain to “bounce” inside the skull.

Bobo Olson, former World Middle-weight Boxing Champion, often did teeth-lifting in his backyard and was known as a man who could take a punch.

In wrestling, of course, the neck is indispensable as a “3rd arm” in maneuvering the body and evading the pinning situation. Some other sports such as tumbling, trampoline work, and acrobatics require neck strength to a greater or lesser degree.

A strong neck will certainly fare better in an auto whiplash accident and a strong neck can even help withstand the possible collapse and injury liable from the squat bar rolling up your back!

Many bodybuilders are reluctant to work the neck, thinking that it takes away from shoulder width in the judge’s eye.

Actually the neck crowns the shoulders and sets them off. A small neck and wide shoulders on the other hand will be sure to call attention to itself.

According to Cassidy no other bodypart can quite substitute for the rugged look a massive neck will present. Close-cropped hair will cause the neck to appear much larger than actual as it is head size compared to neck size that largely determines that rugged look.

As the spinal erectors and trapezius both terminate at the base of the skull, full development of these muscles cannot be complete without neck training.

How Strong is the Neck?
There are many fantastic and unbelievable feats which have been performed with the neck and jaws.

Willoughby, in his great book The Super Athletes, tells of Farmer Burns, the wrestling champion who demonstrated his neck muscles by having himself hanged in an exhibition, taking the drop as in a genuine hanging!

Also mentioned is the old-time Italian strongman and equilibrist “Milo”.

One of his feats involved balancing a platform holding a man and a 400lb field gun and carriage totaling more than 600lb. And all of this was balanced on a pole on his chin!

Willoughby also lists Joignery, a strongman at the Hippodrome in Paris in 1879, who supported for “several minutes” the weight of a horse and rider suspended from his teeth.

Both Sigmund Breitbart and Alexander Zass (Samson) had amazing neck strength. These contemporary strongmen of the twenties could both drive well loaded wagons where the only connection between horse and wagon was the harness held in the teeth of the driver by means of abit.!

Ottley Coulter, one of the last of the remarkable circus strong-men, could, at a bodyweight of 130 odd lb., lift a 182 pound dumbbell with his teeth while doing a handstand.

Joe Vitole owns the highest in the (with hands on knees) at 550 1/2lb as a middleweight!

Warren Lincoln Travis has the world’s record for the teeth lift (with hands behind back –  much more difficult) at 460lb!

More recent are the feats of Bill Cook, North Carolina Super heavy, who has balanced 400lb on his head and pulled a “train” of several cars across a parking lot with his teeth!

Mention should be made here that teeth-lifting or pulling, contrary to popular thought, is much more a test of neck strength than that of teeth or jaw.

You might try some of the aforementioned stunts yourself on a smaller scale, then you can better appreciate the mind-boggling power of a well-trained neck.

Maybe you will discover a new way to demonstrate your neck strength.

Building a String and Massive Neck 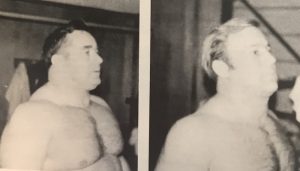 There are many ways of building the neck and some are quite unusual. Gary Young, accomplished boxer, wrestler and former deadlift record holder in the 242’s, has several interesting methods to build his massive neck.

He does a headstand up against a well and lets himself rock down and up on his head alternately stretching and flexing the neck muscles. He has done 200 reps in this manner.

Guy Borelli also uses this method among others, but unlike Gary, finds it tears his hair out and often results in bleeding from the scalp.

Gary will also lay on a bench with the head extended over the end as a partner applies pressure to the head and jaw.

Gary resists the pressure throughout the movement. Another quire unique exercise of his is the “push-up” performed on the floor in the supine position.

You place hands behind the back and attempt to push up and support your body by chin and toes alone. You can put a soft towel under your chin, you will need it. It’s a real toughly!

Many fellows use the neckstrap, but much weight must be used for this to be effective as the changing leverages throughout the movement cause an uneven and incomplete stroke. The headstrap’s very construction is at fault here, as the straps holding the weight are made of cloth.

This allows the weight to swing toward you as the head moves in its upward arc. To be most effective, the neck should be contracting throughout the lift. The weight therefore should move with and in the same direction as the head, (a solution to this later).

Some trainees use the wrestler’s bridge with great effectiveness. This is an excellent method to build size and stamina. For some however, this position can be quite awkward, particularly for those who lack this flexibility and for others who possess quite tender heads.

It too can tear the hair out. This exercise often becomes less direct by the unconscious utilization of the feet as an aid in rolling onto the head.

Teeth-lifting is quite good but it too has advantages and drawbacks. With teeth lifting as with other type of lifting, a certain amount of pain is to be endured. In teeth lifting the strength of the neck can be directly measured in poundage, as opposed to other neck exercises where one counts reps and no great single effort can be made.

Teeth-lifting does a good job in building the back of the neck but some other method will have to be found to build the front and sides where the sternocleidomastoid is found. The sweeping curve of these muscles are certainly the hallmark of a well developed neck. To get the front you can roll your forehead from side to side on a padded bench while on your knees.

Bear down fairly hard while still continuing the rolling motion. Three sets of 20 to 30 reps will do, the last reps producing a cramping feeling. In all neck exercises high reps seem more favorable toward development. In Hugh Cassidy’s experience at least, anything under 15 reps fails to produce that worked feeling. 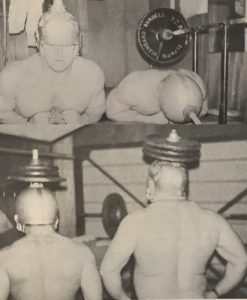 Of all the exercises, this is the one Hugh Cassidy prefers! He fixed a one inch pipe about 6″ long to screw into a fitting he had bolted to his helmet. Four short quarter inch bolts with lock washers are needed to hold the fittings (2 flanges) together. They are the only holes that need be made in the center of your helmet. Use a standard barbell keeper to hold the weights on, procure a Riddell or other type of strong chin strap and you are in business.

According to Cassidy the movement with the helmet is far superior to the headstrap as when the head moves, the weight moves in the same direction and the finish position is just as difficult as the beginning.

Whether your aim is for looks and size or strength or both, it is a good idea to get the blood into the trap and delt area prior to your neck exercise. Upright rows do an excellent job of this beside building huge cut-up delts and traps.

Hugh Cassidy did with a press grip (18″) and raise the bar only to his sternum. Unlike the traditional upright row, this allows one to use far more weight and brings in greater deltoid involvement along with the trapezius. He did 4 sets fairly strict with: 190×20, 215×15, 225×10 and 180 x20!

Brass Tacks
The extremely soft tissues of the neck require more warming up than other body parts so load your helmet up with a poundage you can handle for 25 reps. Five or ten lbs. may be enough if you have never done neck work before. One well-developed bodybuilding friend of Hugh Cassidy found the helmet alone sufficient for his first workout. Get on your knees facing the side of your bench. Lean over it with the fists supporting the chest and begin your movement at the bottom thrusting as high as possible upward. DO NOT allow your chest to rise off your fists – this is a neck movement, not an exercise for the upper back!

After three weeks (working 3 times a week), your neck girth will surprise you. That will be incentive enough to continue. Add weight when you feel capable as you will quickly find that the neck is one of the fastest growing muscles in the body.

Your neck get powerful very quickly also. Hugh Cassidy is able to teeth lift a 250lb man anytime solely by training on the helmet.