Odd Haugen was born in 1950 in Tingvoll, Norway. He started lifting weights at the age of 10 and competing in bodybuilding and weightlifting at age 17.
With the age of 10 he was not allowed to enter any gyms. Thus he built his own equiqment. He used birch trees to fashion dumbells, worked delivering papers to earn money for materials to build weight devices, and even took courses in metal shop so he would have an understanding of how to build strength training devices..

As a youngster he was also interested in ski jumping, football and rowing. In 1968 he was world champion in weightlifting and norwegian junior champion in discus. In 1968 he was involved in the ‘American Field Service International Scholarship”. It is an international youth exchange organization. He liked the lifestyle in the States and later he moved and spent most of his lifetime there. 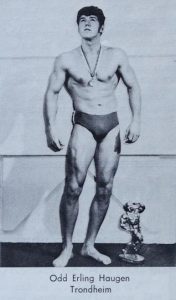 Bodybuilding was quite unknown in Norway. Odd Haugen had a long way to travel to bodybuilding competitions. But he had luck and time to manage the journey.
In the year 1968 he was “Mr. Norway”. During this time his training was focused on bodybuilding. He used the instinctive Training. He didn’t have a fixed program. Sometimes he used Super-Set, Tri-set or giant-set to pump up the muscle.

He also used the split system and usually trained 4-5 times a week, but every training period was not so angry when he trained very intensively. He did’t really train for strength , but he was able to achieve the following results: Bench press 155kg/341lb, Squat 215kg/473lb and Deadlift 260kg/573lb.

Strength training
From the age of 25 to 32, Odd spent most of his time training and practicing social sports such as tennis and skiing, and only sporadically trained with weights.
But as time passed he realized something was missing. He started touching the iron again and trained his way back to the world of strength. 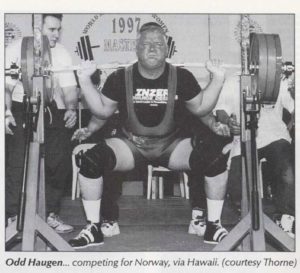 Some of the highlights of his comeback to strength and powerlifting would be the 1996 AAU Masters National Powerlifting Champion! 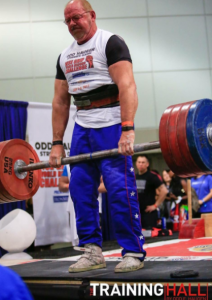 At the young age of 64, Odd Haugen is still lifting heavy weights. He is involved in his new sport MAS Wrestling. He is trying to popularize this kind of new sport. He is used to working as a volunteer and he is not making money on that. 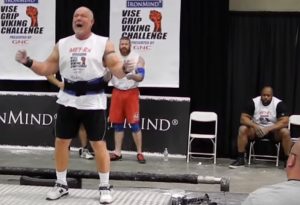 Odd Haugen is also involved in the world of grip-strength and in the production of the contest “Vise Grip Viking Challenge”. Odd managed to invite strongman stars like Vince Urbank, Mark Felix and Brian Shaw. 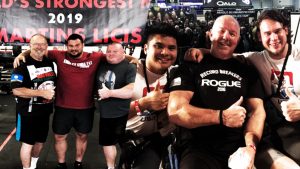 Odd Haugen opened his own gym called “Training Hall”. There are a lot of tough guys there and Odd Haugen is used to coaching and producing strong people like Martin Licis (World’s Strongest 2019).

Martins Licis wrote this on instragram:

“THANK YOU Odd Haugen and Mike ! When I was just a young buck, fresh in California, both of you took me on and trained me in the art of strongman! There’s no chance I claim Worlds Strongest Man without you two. You taught me how to lift stones, carry heavy freakin weights, press axles, logs and dumbbells, grounded me before every contest, and corrected my course when I was off. It has been such a pleasure to be a part of Team Valhalla. From training in Odd’s garage, to then opening ‘The Training Hall’! What a magnificent journey it has been. To think that the real good stuff, is only beginning now. I’m excited to see what we will create next, and I cannot be grateful enough for your guidance and comradery!” – Martins Licis