Dale Adrian has been able to build an over 19″ measurement and won many best Arms awards. A lot of guys thought Dale had the secret.

Dale’s only answer is to use weights. You have to train steadily and consistently, never missing workouts. Over the past three years, he has laid off training only two very widely spaced workouts.

He did train lighter and for shorter workouts after peaking for a contest, but still it’s steady, plugging alone type workouts with weights that’s the key.

Training forearms and delts equally as hard as biceps and triceps is also vitally important in developing a winning upper arm. Obviously, this is important to keep your proportion in line, but the value of such training goes even deeper.

If you look closely at an anatomy chat, you can trace the origins and insertions of the arm and shoulder muscles.

You will find they all interconnect, the deltoids, for example, attaching nearly halfway down the outside of your upper arm, and some forearm muscles also attaching to the upper arm bone.

Here are two sample routine. The first one is how he normally trained (three times a week, brackets indicate supersets) and the second will be the upper arm program he was using around 1975. 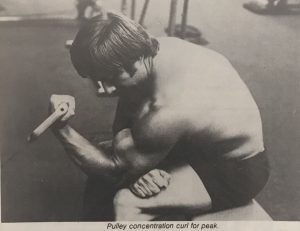 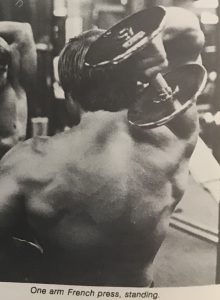 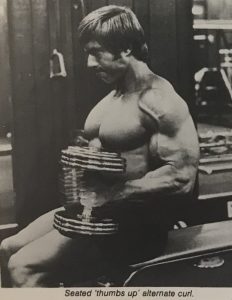 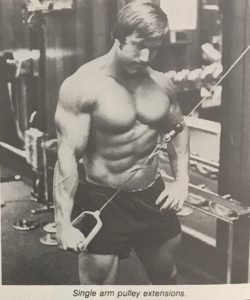 Training Philosophy
He believed in training with strict form and a wide variety of exercises and equipment. You should change your training schedule each four to six weeks and should certainly include different movements with each schedule change.

Additional variety is also easily injected into your training program by using the same exercise, but with varied grips. Let’s take the barbell curl as an example of this. Regular grip curls are basic, but why not try a wide or narrow grip?

That gives you two variations and you can build that number to four by doing regular and narrow grip reverse curls.

You can double this number by doing all of these variations with your back pressed against a wall. This makes the exercise slightly different, but it’s the accumulation of the slightly different angles of attack that will give you complete development.

Dale Adrian believed that using maximum weights in arm exercises has its place in workouts. He has strictly curled in excess of his own bodyweight several times and has trained very heavy for much of his bodybuilding career.

By concentrating deeply and training very fast, he can get a great pump. This pump is the key to muscle growth, and you may even find that you can accentuate it by posing your arms between sets.