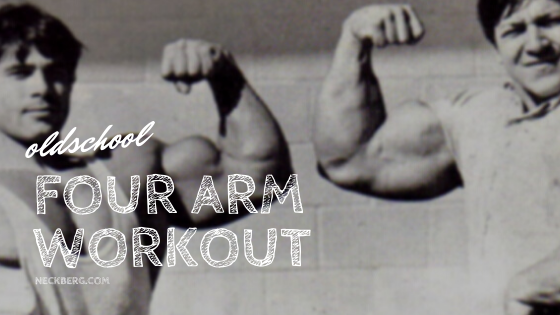 This is the routine that got his arm over the magical 20″ mark. It is absolitely sensational for building incredible size.

Training Tips – This one should be done three times a week. Rest only 30 to 45 seconds between sets. After the warmup with the one-arm extensions, try using as heavy a weight as possible in each exercise while getting the amount of reps listed. Full concentration on each movement was always foremost in his mind and he attributes a great deal of his success in this routine to using his mind over muscle. 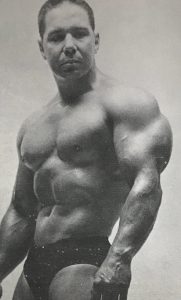 Pearl has been a longstanding member of “The 20″ Arm Club” and is acclaimed for possessing perhaps the most balanced and shapeliest arms in the world. He’s also one of the acknowledged masters in training recuits for the 20″ Club. Here’s the way he goes about putting size and muscularity on his gargantuan limbs.

*To keep the pump in the triceps during the biceps exercises, alight set of kickbacks is supersetted with each biceps move.

Training Tips by Bill Pearl: He works extremly fast and does not shoot the bull with gymnasium cronies. Except fro the light kick back sets, heavy weight are all he uses. Occasionally, he will go as high as 8 reps and possibly down to 5 reps, but his aims is to do 6 good one. The form is – strict – at all time.

He was adjudged the top amateur bodybuilder; in the world when he was proclaimed “Mr. Universe” by the IFBB. A big man by any standards, Ken’s erupting biceps and sweeping triceps surpass 21″ easily. Here’s his specialized workout:

Training Tips – Finish off with 4 quick sets of dips supersetted with one arm Dumbbell curls while holding on to a vertical bar. Don’t rest between these blow-out sets.

During the regular part of the arm workout rest about 45 seconds between sets.

The routine listed here was used by him while he lived in Florida and in a little over nine months his arms skyrocketed from just over 18″ to a solid 20″ cold!

Training Tips – The arms were worked on the days which had the shoulders, chest and back splits. Robby workouts extremly fast and uses very heavy weighs.