Oldschool Back Workout by Steve Stanko! 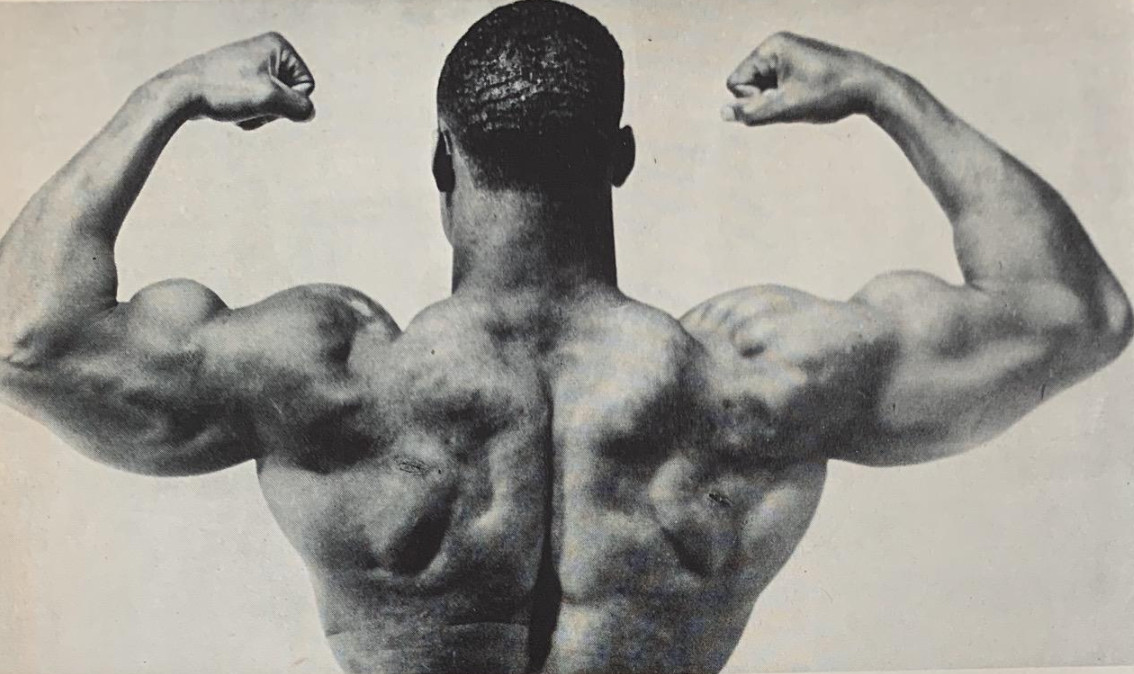 In this article you will learn how to build a back that has every area developed with proper proportions. The following oldschool workout routine will give the appearance of a rugged powerful back with no weak or underdeveloped spots. The listed exercises describe Steve Stanko’s (Mr. America 1944/47) workout philosophy of a well developed back!

But first a short anecdote by Steve Stanko, he told this story: “At a recent physique I was again reminded of the importance of a well built back and of the general lack of proper back development among the current crop of physqiue men. In this particular contest there was a close battle between two outstanding contestants for the most mucular man title. The judges were having a hard time trying to decide, so they called the two men out to have anohter look, this time side by side. The contestants were first asked to stand facing the judges. Both were outstanding. They were then asked to turn around with their backs facing the judges. Now there was little doubt in my mind which should win as the back development of one of the contestants was definitely superior to that of the other. This proves two points. First, that it takes only one weak point to lose a title and, secondly, that in this instance a well developed back was responsible for winning the title.”

According to Steve Stanko many of the contestants had a lot of muscle on their back, but here always seemed to be certain areas that lacked development. The most common weakness was a lack of development in the spinal erector and trapezius muscles. It seems that the latissimus dorsi muscles were developed to a greater extent than the other areas of the back. For some reason, perhaps the fact that it is one of the only back muscles that the bodybuilder can see from the front, this muscle is usually the only back muscle that is given any serious thought.

The Mr. America title holder states that the latissimus muscle is usually well developed, which is fine, but often at the expense of the other muscles of the back that seem to get worked only occasionally or indirectly, which is not so fine.

Most articles about the back usually state that there are three basic areas that need to be developed in order to have a well developed back. These areas are basically made up of the latissimus, trapezius, and spinal erector muscles.

These articles usually list exercises that will develop the muscles in these certain areas, but do not go into detail about working specific areas of the back.

Take a look in the mirror and decide what you want and where you want it on your pectorals and then read how to get it.

Conversely, as mentioned, when an article is written about the back, it usually gives exercises to develop the lats, traps, and erector muscles without any concern as to individual sections of the muscles.

About the only back muscle to get any special consideration is the lats and according to Steve Stanko they are usually well developed.

How to bulk/build up the trapezius (upper and loser) and spinal erector? 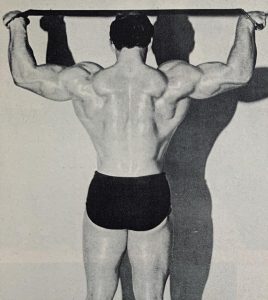 Trapezius. There is something majestic about a back with a well developed trapezius. It lends a rugged, powerful look to the entire back, particularly when the lower portion of this muscle is developed. Both John Grimek and Vern Weaver (see above) are exceptional thick in this area and both have about as well developed backs!

Upper trapezius. Olympic weightlifters almost always have outstanding trapezius development. The reason for this development is evident when you consider the exercises they specialize on – snatches, cleans and heavy high pulls. All of these exercises have a strong influence on the upper trapezius and, in fact, upon the entire back. 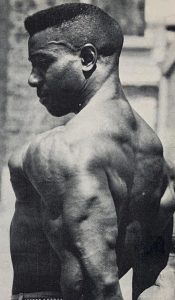 Lower trapezius – intra scapular area. Undoubtedly this is the most neglected area of development of the entire back, the reason being that not too many exercises work this particular area vigorously and the exercises that do so must be done in a certain manner or their benefits will be derived by other muscle groups.

The two exercises that work this area most directly are bent forward rows and bent forward lateral raises. However, since the lower trpezius is responsible for pulling the shoulder blades together, it is important that when performng these two exercises you make a conscious effort to pull the shoulder blades together at the completion of each repetition.

For example, when you do bent forward rows, as the bar approches the chest make a conscious effort to pull the shoulder blades together. Vern Weaver had a remarkable development in this area of the back. One of his favorite exercises was the cheating bent forward row on the power rack. He would set the pins in the power rack so that the bar was a few inches above his knees.

He would then take a medium width grip, set his back as if he was going to deadlift the weight from this position and start the weight moving with his hips, lower back, and legs. Once the weight started moving he would give a tremendous pull with his arms and upper back muscles and at the same time bend forward and squeeze his shoulder blades together momentarily.

There are many exercises that work this area indirectly; however, the most effective are power cleans, high pulls, deadlifts, and shrugs.

This group of muscle has always been the classic favorite of writers in the past to point to when they would criticize the weak points of a bodybuilder’s build. However, it appears that all of this criticism has done some good as there seems to be less room for criticism than before.

Perhaps the current fad in powerlifting and the general emphasis upon heavy squats for gaining weight has helped. The spinal erector muscles respond fast, especially considering the small amount of time and effort needed to make them grow as compared to that needed to get the arms to grow.

Here again is where the Olympic lifter excels in development as he does the powerlifter. But that’s not hard to understand when you examine their routines.

Predominantly heavy pulls from the floor, squats, and deadlifts. Therefore, if you want a similar development in this area, do likewise.

And, to get a little variety in your training, try dumbbell sings, hyperextension movements off the end of a bench, and good morning exercises.

Don’t negelect developing your back, particularly the trapezius and spinal erecot muscles, as it contributes greatly to your appearance – not the image you see in the mirror, but that seen by others.

And, who knows, you amy be the contestant who wins a close contest simply because you were willing to spend as much effort in developing your back as you did developing other body parts.