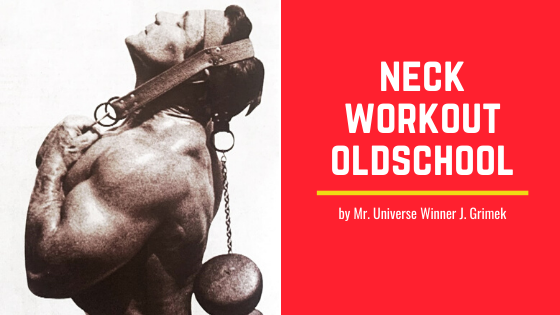 The following neck exercises and training philosophy was developed by Mr. Universe Winner John Grimek. He was an American bodybuilder and weightlifter active in the 1930s and 1940s. Throughout his career he carried the nicknames “The Monarch of Muscledom” and “The Glow.”

Mr. Grimek liked to workout his neck with harness, weights and bodyweight! The following routine is very oldschool, have fun – Mr. Berg!

The neck can be developed by many of the regular exercises. These exercises can be done with or without apparatus, although the best results are obtained when some form of resistance is employed to work these muscles vigorously.

John Grimek knew some older men who employed a few head movements to relieve the pressure in their necks, and found that even these simple exercises made their necks grow. Others applied mono-resistance, a form of resistance supplied by the hands, which has aided in increasing neck size. However, by and larhe the method in which weights are used to supply the necessary resistance to work these muscles is best. Such exercises not only develop the neck but strenghtens the whole neck structure, something which is more important than size alone.

Did you ever wonder why wrestlers always seem to have the biggest necks of any other athletes? This is not just a coincident but is due to the way those men work their necks. Tugging and pulling on the head works these muscles hard and, to avoid “getting pinned” they must bridge, a movement that works all the muscles of the neck. Bridging is one of the best all-around neck exercises you can do. Only a few each day will bring remarkable improvement in your neck appearance.

John Grimek’s exercises for the neck! 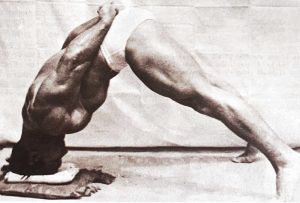 This bridging exercise is opposite to the one pictured below which works the neck muscles entirely different. It should be included for added variety once in a while. 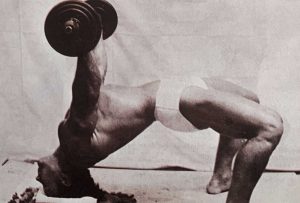 This type of bridging is one of the best methods known for developing the neck muscles with very fast results. No weight is needed when first beginning this movement, but as the neck grows stronger and bigger, some resistance, such as the weight shown, should be employed. 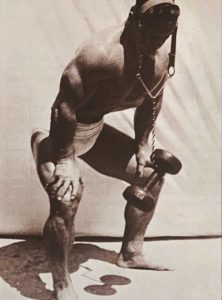 One of the simplest of all neck exercises that can be done with the head strap. Use only enough weight to permit at least 12 to 15 repetitions..never strain. 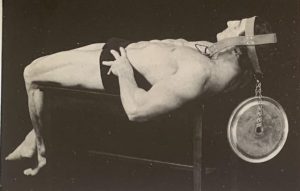 This exercise is similar in action as above. Make each movement slow and deliberate. 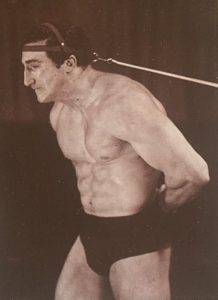 Use small head strap attached to chest expander cable as shown, which is fastened to a wall or post on the other end. Move head about in various positions until neck muscles are thoroughly worked. 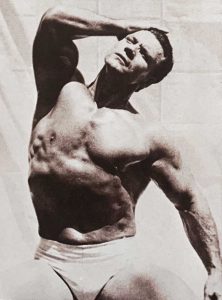 One of the neck exercises that can be done without any apparatus, although pressure exerted by the hand make the neck muscles work. Repeat pressure with other hand, then apply to the front of the forehead and finally place hands on back of head and resist in this way too. 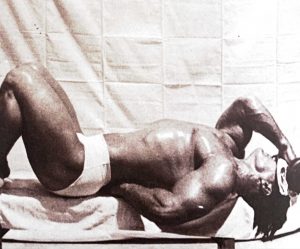 If you have those “extra chins” you want to lose, try this exercise. Lie on a bench and place a weight on forehead, using a pad, and slowly move the head up and down. Only a light weight is required using the hand to balance the weight and not lift it.

More John Grimek’s thoughts on the neck!
According to John Grimek a strong neck may save you life! What does a strong neck have to do with saving of one’s life? The answer is quite simple as you will learn.

John Grimek had a clinical discussion about exercise with several professional men and, as was expected, nearly all were opposed to any form of heavy exercise, especially weights. Nevertheless, one doctor in this group pointed out that he had been called on numerous mishaps and he found that the majority died from broken necks suffered by the impact. He further emphasized that all people who died from this condition were those who invariably lacked development and had thin, underdeveloped necks. On the other hand, he continued, those who survived such a shock and lived were those whose necks were stronger and heavier developed. He then urged that some form of physical training be embraced to strengthen the muscles, particularly the neck, adding, that this could be the difference between life and death in such accidents. He also praised weight training as a means of accomplishing this.

Another reason why neck exercises are important is because they have helped many a chronic headache sufferer to obtain partial or complete relief. Those throbbing pains were eliminated by doing a few simple neck exercises daily. This is logical in view of the fact that so many nerves, which go to the brain, are located in this region and can be sidetracked by calcerous deposits and nerve impingement. These conditions can cut nerve efficiency and cause the head to throb and ache…exercise loosens them and promotes freer functioning.

Most animals have extra powerful necks. Notice the neck size of a bull, horse, tiger, lion and other animals and you will agree that all possess large and powerful necks. Of course these quadrapeds must have strong necks to support their heavy heads, but most of them also use their heads to defend themselves and move heavy debris in search of food.

The men who play football, wrestle and perform high dives should strive to acquire a strong neck for their protection.