The following bodybuilding posing guide and philosophy was developed by Mr. Universe Winner John Grimek. He was an American bodybuilder and weightlifter active in the 1930s and 1940s. Throughout his career he carried the nicknames “The Monarch of Muscledom” and “The Glow.”

In this country much of the physique contestant’s success depends on his ability to show off his muscular development to advantage, though there are other qualifications more important than posing.

Naturally, good posing is based on a good physique, and a good proportions, symmetry and sharp muscularity. If a man is awkward in his movements and clumsy in his posing he is apt to lose a few points that may mean the different between winning or losing.

It’s important, therefore, for anyone who takes part in physique competition to improve his posing ability and be able to display his development advantageously.

On the other hand there those who get “too arty” and go all-out with swishy poses that incite jeers from the audience. Most officials who judge physique contest dislike to see these doe-dragging and absurd finger-pointing-without-a-purpose poses.

Not that these two effects do not have a place in a well-planned posing routine, but too often they are done in such a ridiculous manner as to evoke unfavorable comment from the onlookers.

One frequent example is the poser who invariably points up yonder, where he should be looking, but he instead is fascinated by the flexed biceps of his other arm.

This type of pose serves no real purpose and is ridiculous to those looking at it. Pointing or any obvious movement of the body should serve to indicate the action of the pose, otherwise it’s useless.

Poses of this type, when done right, have a purpose and are entertaining to watch when done by a competent poser.

Not everyone, however, can become a good poser. Certain natural talents are necessary, as is much practice.

Graceful poses have smooth, flowing lines that suggest animation and power, but effeminate poses depict that limp, “oh help me look” which is where the toes begin dragging!

Anyone can be graceful without doing those limpy, effeminate poses that some do because they feel it is graceful. You should always pose to display your development to the best advantage possible without being awkward or too graceful!

The thing Mr. Grimek remembers about his first Mr. America contest that was held in Madison Square Garden is that most of the contestants did the old familiar “lat spread” or arm flexing poses.

As physique contests became more established and were held in every city, town and hamlet, the tendency toward becoming graceful grew.

According to Grimek almost everyone was trying to be so graceful that it provoked ridicule. Ofttimes the hands and fingers were held in such a way as to suggest the person was afflicted with chronic arthritis.

Attempts such as these to be graceful are what cause the spectators to cast invectives at the poser…because in most cases they serve no purpose and look absurd.

In several of John Grimek’s articles of this nature in the past he has hinted that a pose should always be graceful but strong, suggesting that the hands could pantomime and be used as an expressive medium.

Perhaps he was partly responsible for some of these follows getting too arty, but he was afraid they missed the point.

He attempted to get across. Because, contorting the fingers, or dragging the toes, or assuming these limpy poses wasn’t John’s idea of being graceful. Many poses can have that forceful, dynamic look that instantly arrests the attention of those who observe them.

But “limpy” poses only cause comment, and not very complimentary either. So choose your poses to suit your type and you will be a better pose.

John Grimek was inclined to think that the audience and judges would prefer to see a variety of animated, well-executed poses instead of those limpy, swishy one.

However, since most physique contestants are limited to three or five poses, they should select only those that bring out their best features, devoid of any feminine traits.

John Grimek cited that all poses should be done in a simple and easy manner. Avoid any abrupt and awkward movements.

Most poser realize that posing seems to come more natural for some than others, but awkwardness appears more noticeable when the change from one pose to another is made.

There are those who always do the same pose from the front and then the back, flexing one arm and then the other and who go through a whole series of such poses.

This of course is a simple method of remembering the sequence in which each pose follows, but this type of posing provides little variety and could prove very boring to an audience.

Moreover, some time is lost in turning from a front to a full back pose, and often done so clumsily that it detracts from the pose. It’s always better, and more graceful, too, when a three quarter turn is made and another pose is assumed in this position before making the full turn.

Some posers have the habit of “jumping” into a pose, that is, they stand relaxed trying to figure which pose to do, then suddenly go into it with such vigor that their action startle the people in the front rows.

John Grimek recalls one fellow in particular who always did this. He would stand there pondering a few seconds which pose to do, then without any warning would strike some wild pose that startled all the people in the first few rows. After holding the pose a few moments he would again relax, pause a second to think of another pose, then once again swing into the pose just as vigorously as before. Naturally people never remembered his poses or his muscular development,
but they never forgot his unusual manner of striking a pose.

Posing should consist of very little complete face-about turning and then always in smooth, graceful turns, usually on the balls of the feet. Meanwhile the arms should also move into position so that the whole pose is assumed at the same time.

Such posing is pleasing to watch and will be enjoyed by people who are usually against any king of posing and physique contests.

But to achieve this type of perfection requires endless practice, more than most of us care to do…unless you want to become a good poser and practice faithfully.

Another common fault in posing is trembling while holding a pose. Trembling could be caused by nervousness, but much of it caused by trying to flex the muscles too strongly.

Flex the muscles yes, but not the point of shaking. Nor is it necessary to make faces while doing a posing exhibition. It’s just as easy, when you know how, to flex the muscles and still have a natural expression on your face.

Any experienced poser can tense his muscles until they ache, but his facial expression remains unchanged.

Nor is it necessary to use a silly or forced grin, although some poses can be improved by smiling….but very few indeed. (Editor’s note: above you would see Steve Reeves and John Grimek. He beat Reeves twice, first in the 1948 Mr. Universe and second time at the 1949 Mr. USA)

Just remember to flex the muscles – not the face – and you poses will improve.

There are poses which look impressive from either the front or back view, but lack impressiveness from other angles. Very few poses look good from all angles, and these are usually the ones that have flowing lines suggesting an “S” curve from the head down to the feet.

When done right they are graceful, but when overdone are swishy and effeminate.

This pose when done correctly by one with good latissimus development is terrific, especially from a front or back view. But, have you ever taken a look at this pose from the side? How different it is. The back is rounded in a kind of hunchback shape, the chest is flat or concaved, the legs are usually bent at the knees and the hips look as if they were kicked under. The arm and shoulders never look their best, although much depends on the lighting used.

According to John if this pose isn’t correctly done it does not look good even from the front or back view.

The most common mistake is to lift or shrug the shoulders which shortens the neck and causes the head to look as if it is sitting atop the shoulders with little or no visible neck.

Furthermore, when this struggling is done it narrows the shoulders, which also lengthens the torso and shortens the legs, distorting body proportions and resulting in an awkward pose.

Another error by many posers is to feature one muscle or some group of muscles, usually at the expense of another group. Fellows who have certain muscles better developed than other tend to feature them without giving any thought to less developed one.

It’s true that one should always feature his best points, but never at the expense of a weaker group which may be more noticeable because of the obvious contrast.

If you must feature a certain muscle always adopt a pose that will show up your best feature without attracting attention to your weaker points.

The best posing routine, however, is one that gives expression to all the muscles and provides a variety to the onlookers.

To prove how simple posing can be, here are six poses developed/suggested by Grimek that anyone can master with a short time. 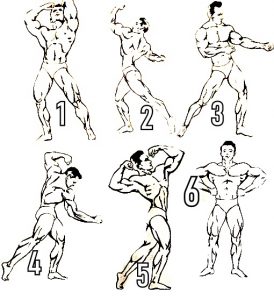 Notice that there is only one complete changing of the feet, yet all the poses appear to have different leg position. The feet are actually reversed in the 5th pose,  whereas only very slight changes are used in all the others.

This constitutes simplification of leg action which simplifies pose changing and avoids those clumsy breaks. Of course this is only one idea of how posing can be done effectively.

Anyone can choose his own favorite poses and make up his own routine. But remember, always start with a front or three-quarter front pose and always finish with the same kind of front view. It makes leaving the stage easier and nicer.

If one assumes a full back view for his final pose he must turn completely around before going off. This make it rather awkward and it’s impolite not to acknowledge the reaction of the audience before walking off.

According to Grimek antoher error so many physique competitors make is to present their best pose first, and finish up with a poor one.

One is better off to do only a fair pose first, a better second one, and a real “smasher” for the third and final pose if only three poses are allowed.

But in any case you must save the best for the last. This leaves a lasting impression with the judges (and the crowd) and you are not apt to be lost in the shuffle.

Lust but not least it takes a lot of practice to do every pose well that you feature. Devote 20 to 30 minutes about three to five times a week perfecting your routine, especially for competition.

Rig up a posing spot in your room or garage and practice your poses before a large mirror until you have them down to perfection.

Always strive to exemplify power, symmetry and vigorous action in your poses. These are so much more effective then those willowy, swishy kind. The audience will appreciate your effort and it is very possible that the judges will rate you higher, if your physique merits it.