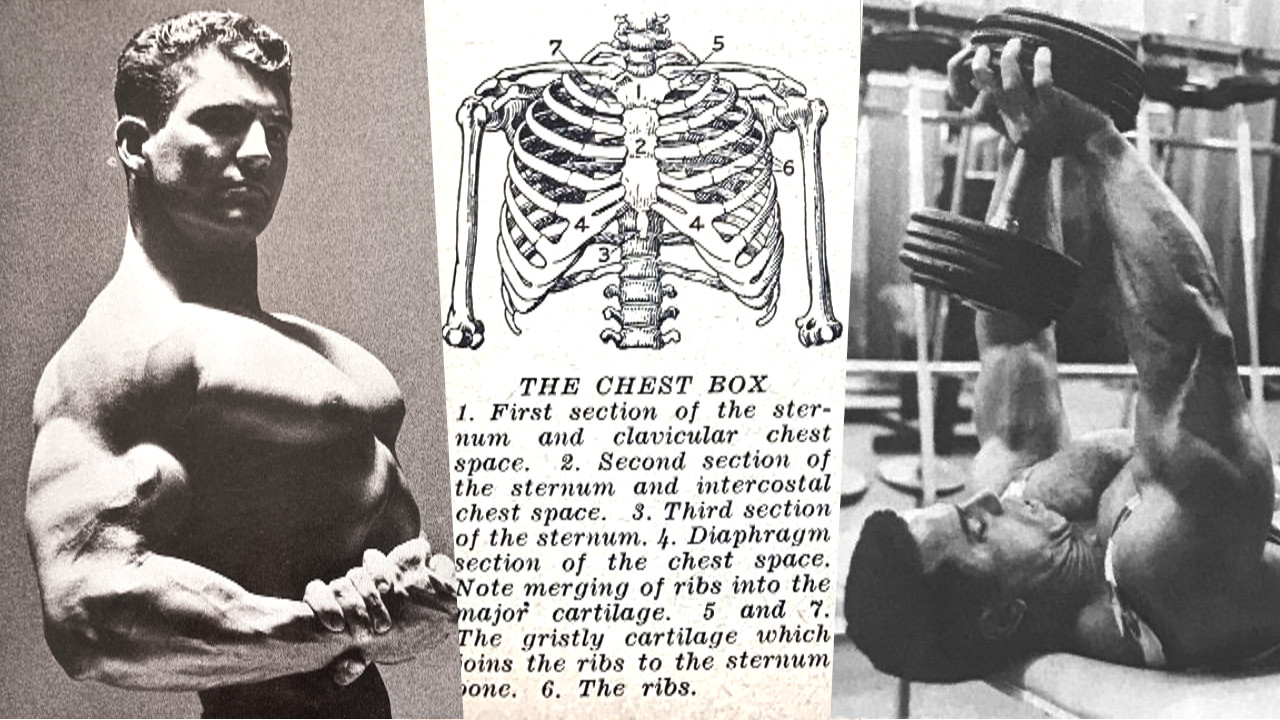 Are you tired of bench pressing over the years without much progress in the chest? You need same variety? Then try the combination of squats and pullovers. Back in those days the bench press was the lazy way to train the chest. Old timers used to train their Rib-box with breathing and stretching exercises.

In this article I will show you how Mr. America Ray Routledge and John Grimek (Mr. Universe) used to train this way. Have fun!

Building the complete chest, which includes both the rib cage and the pectoral muscles, can be enjoyable and physically rewarding. Training for the chest area is divided into two parts: rib box training and pectoral muscle training.

Since the building of a mature, full rib box takes far longer than the development of large pectoral muscles, Ray Routledge feels that the neophyte bodybuilder should start his rib box training at an early age is practical. 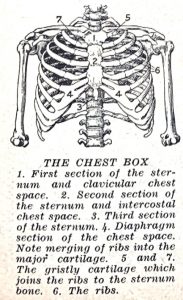 To explain this aspect more fully, we’ll say that the bodybuilder does a set of squats for his thighs; immediately after his set of squats he lies down on a bench and executes a set of deep breathing pullovers.

The reason for this situation is that when the bodybuilders does his thigh work he is using heavier poundages than he is capable of employing on other body parts. This heavier poundage causes him to breathe more laboriously than usual in his training.

Ray Routledge used the squat and the pullover as example exercises. The bodybuilder, of course, can use any deep breathing weight resistance exercise with any thigh exercise that he chooses. After the bodybuilder accomplishes his rib box and thigh training, he should then proceed directly into his pectoral muscle training so that the combined stimulus is kept in one area until training on this body part is finished. 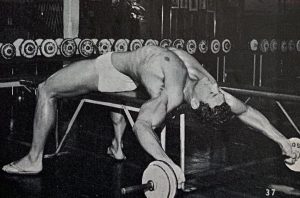 This movement is performed on the bench with the head even with the end of the bench, not hanging over the bench. The trainee uses the barbell with an extremly wide grip.The arms are straight and locked, holding the bar up over the chest and face. He starts the exercise by taking a deep breath and then lowering the bar until he gently touches the floor with the weight behind him. 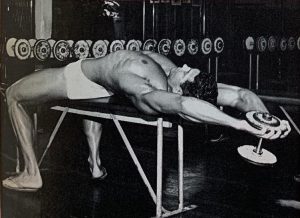 This is similar to the straight arm pullover, the only difference being that the trainee has his head extended off the end of the bench and his hand grip is at shoulder width. As in the straight arm pullover, the bodybuilder lowers the barbell gently to the floor. Instead of bringing the barbell to the overhead position, he brings the barbell to the chest before lowering it again for the next repetition. The breathing is the same in both exercises. 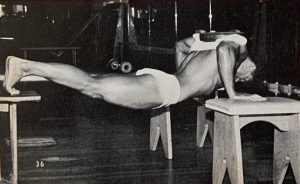 The third exercise is solely for the pectoral muscles. The trainee attaches weight to the body and then steps on a chair or bench until he is in position at full arm’s length on the end of the parallel bars. He then lowers himself with the weight until he is at rock bottom as far as his arms will allow him to be lowered. Once this rock bottom position has been attained, he presses himself back up to full arm extension before he lowers himself down into the next repetition.

The trainee must concentrate on lowering and raising himself to the full position in each repetition so that he will place the full effort on the pectoral muscles instead of on the triceps muscles of the arms.

Flying Laterals On The Bench
The fourth exercise is also exclusively for the pectoral muscles. .

According to Ray Routledge this movement is the very best for pectoral training. It will get maximum results on these muscles where all other “pec” exercises fail. To execute this exercise, the trainee lies on a bench with a dumbbell in each hand resting on the thighs.

With the arms straight, he takes the dumbbells in a full arc out to the side of the body and proceeds with them until the arms are parallel out behind the head.

The trainee then brings the dumbbells in a return trip in the same arc until they touch the thighs again. Care must be taken by the trainee that he concentrates on keeping the arms fairly straight and that he makes a full circle or arc with the dumbbells. 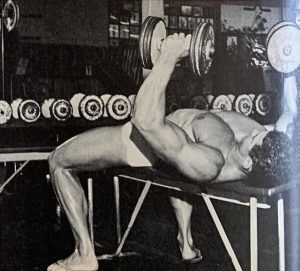 The fifth exercise, which is called the Barbell Bench Press, works both on the rib box and the pectoral muscles. The bodybuilder will need assistance from training partners in this one as he will progress rapidly to heavier poundages. The trainee grasps the barbell with a wide grip, holding it over the chest at full arm extension.

He lowers the barbell to the chest and then presses it up again until his arms are completely extended. Care must be taken that the trainee touches the chest with the barbell on each repetition.

The sixth and final chest exercise, also for both the rib box and the pectoral muscles, is called the Dumbbell Bench Press. It is done exactly the same as the barbell bench press, the only exception that the trainee uses the dumbbells instead of the barbell. Care should also be taken that the bodybuilder touches the chest with the dumbbells on each repetition.

Ray Routledge’s suggests that the beginning bodybuilder start his chest training with at least one rib box exercise and one pectoral muscle exercise.As he advances in his training he may add more chest movement to his program.

Squat and Pullover by John Grimek

According to John Grimek deep breathing, induced by muscular activity, will not only cause the lungs to function to full capacity, but expand the ribbox. Such activity of the lungs helps to revitalize the blood, helps to throw off waste products more effectively, revives worn tissue quicker and recharges every lung cell with new life.

As you are expanding your chest by lifting up and out you would create greater spaciousness. This is why those who include deep breathing exercises with squats seem to feel an “expansion” in the sternum region like “growing pains.”

Many men have broad shoulders but lack sufficient depth to bring the chest to better proportions. John Grimek suggests that such men should specialize on expanding the ribbox instead of seeking means to broaden their shoulders and widening their backs, or attempting to deepen their chests by thickening the pectoral muscles only.

A good chest must be built from the inside out instead of from the outside in. 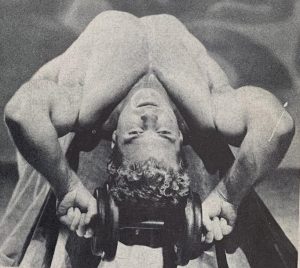 In the squat always do at least 20 repetitions for the first set. Use a weight that will permit you to complete this number without strain or musclar struggle, but breathe normally and fully. It is not necessary that you inhale any specific number of times during this squatting period…it’s only important that you continue breathing fully.

Usually after 20 or more reps have been done, a breathless condition results, then it is advisable to hang from a chinning bar, overhead pulley or any other means whereby the arms are extended above shoulder level and practice deep breathing, concentrating on lifting the chest and expanding the ribbox to its limit.

Next, any chest exercise, either lying or standing, should be done to further expand the ribs. The pullover, lying and standing laterals, dislocates and the like are recommended, but when employing these exercises for chest expansion, be sure you employ the right poundage; light enough to insure complete ribbox expansion without too much muscular interference, which lessens the action of the ribs.

When ever the pullover or any exercise is used for chest expanding, lighter weights are more beneficial than heavier poundage. Many exercises become over-concerned about the amount of weight they use. This approach is entirely wrong from the standpoint of chest expansion, because whenever a heavy weight is used the ribbox fails to expand fully because of muscle restriction and tension, but when lighter weights are used to activate the muscles only enough so the full expansion of the ribbox is not affected, greater benefits in chest gains can be made. Here again, high repetitions should be performed so the entire lungs are saturated with oxygen.

Editor’s note: That’s it. High repetition breathing squats and pullovers. Do you need some more inspiration about this kind of training? Then I would suggest to use the tag system and click on “Joseph Curtis Hise”. That oldschool strongman made rapid progress with breathing squats and he is very well known as “Daddy of the Squats”. Joseph published great thoughts about breathing and squatting technique. Have fun! – Mr. Berg