Oldtime Strongman Training For Back And Chest Growth 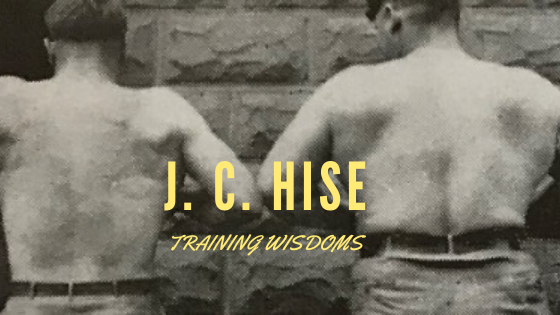 This was the first article written by Joseph Curtis Hise for Iron Man around 1940. You will find here a complete resume of most of Hise’s teachings and how to train for chest growth the oldschool way! – Mr. Berg

“MUST” muscle as stated by Arthur Saxon: (meaning muscles that a strong man must have well developed if he is to succeed).

The best exercise for the vastus internus is the full squat or deep knee bend. This exercise brings into action the biggest muscle groups in the body, creating CO2 or carbon dioxide in the muscles which is dumped into the blood to be expired thru the lungs.

This forces up speed and range of circulation respiration, and stimulates growth. This is in order to make “recuperation” easier and more rapid, hence it broadens shoulders, increases chest size.

STIFF LEGGED DEADLIFT
The chief exercise for the Spinae Erector muscles is the Stiff Legged Deadlift on a hopper. A hopper resets tendons and ligaments in most efficient position for maximum effort and is also most efficient for exercise use.

SLDL has little or nor effect on weight gaining, But has ALL the effect on virility, speed and maximum energy production. In fact a SLDL on a hopper exerciser makes a “fast” lifter look as clumsy as a cow in comparison. It is the only exercise that will cure a slipped or sprained back in weeks time that takes six months to year to fix with a doctor’s care. The weight seems to jump three feet on the hop because of the super efficient position of the ligaments during the dive and bounce.

Seldom does the weight bounce an inch from its momentum because of the “energy and strength cheating” leverage position of the muscles and ligaments that are set during the dive and hop.

The regular Dead Lift exercise is work because the ligaments and muscles are “unset” and must be “reset” on each lift. Dive with the SLDL and BOUNCE IT HARD!

The hopper must be level to prevent the hopper weight from going to the low side. This is the only exercise that will speed up a slow person or deadened muscles from swimming or other “efficient newspaper exercises.”

Charlie Smith, a former English swimming champion quit swimming when he perceived how “dead” he was compared with the average inferior lifter and used SLDL to enliven himself. SLDL without a hopper is harmful to some and to other is a torture instead of an exercise.

Very few exercises can press and develop the deltoids. Two arm presses do not put maximum effort on the deltoids.

John Grimek (Mr. Universe Winner) used: From overhead down to side at shoulder height hold out and raise again for effect. Many can’t do that because of the pain. Probably the most fool proof exercise is Tauscher’s alternate kettle bell press. He had the most remarkable deltoids and pressing power.

Most kettle bell handles are impossible for this exercise Offset or offside kettle bells must be made. (see Teegarden’s pictures). Ones who have best deltoids and best spinal erector and best vastus internus will have the most powerful groups of muscles, broad shoulders and deep chests as a matter of course.

For the Deep Knee Bends (Squat), 5 to 10 breaths at the interval, standing up, between reps. Draw air in thru the mouth. Deep and fast. Blow out with a woo-s-h like the puff of a steam locomotive. Take in a full breath and squat on full lungs, head up and back straight.

Expel breath on way up or when erect. Guess at breath intervals don’t count them as it detracts attention. As you keep count of reps do it in reverse or 20, 19, 18 etc. This reduces the mental hazard and helps prevent losing count.

To Deep Knee Bend without the breathing intervals causes no breathlessness. ONLY enforced breathlessness can broaden the shoulders and increase chest size. Why?

The DKB is bounced into and out of to secure most efficient muscular and tendon leverage. To go down slow, relax, then reset to come up is worthless as an exercise and dangerous as an encourager if sprain. ALL SUCCESSFUL DEEP KNEE BENDERS got that way from the bounce in DKBs. All succeeders got that way from fortunate combination of circumstances “crooked” bars and natural laziness and sloth in exercise.

The ones who succeed easily know the most and that is the sole reason for slow gaining in about three fourths of all successes, the other one fourth got rapid results from accidentally doing all the RIGHT exercises.

The only gauge of correct exercise, Leisure & Nutrition, is the before exercise thrill and the after exercise growing feeling.

After a few sessions one will feel an extreme thrill and eagerness as his DKB time approaches of SLDL and after his DKBs have been finished he will feel as though his upper chest is tearing apart in attempting to grow. This is the sole barometer of correct DKB exercise, balanced food and recuperation.

When this feeling comes the chest is growing and as long as it continues, so does the chest growth. If this feeling disappears then is when “knowing the most” will bring it back. One has to be his own architect.

MUST EXERCISE
The Clean and Press may be used to take the place of both the curl and press if you wish to do them. Clean the weight in a sort of back hand curl to chest, press to arms length overhead then set the weight on the floor and straighten up. Take 3 to 6 deep breaths and continue 15 reps. with breath intervals with each rep. Alternately space hands wide apart and close together on bar for better all around development. This is VERY good for developing arms.

DKBs do not arch upper chest. Use doorway and two arm pullover exercise, twenty reps with light weight to stretch rib box as weight is lowered to floor. (Weight does no good if too heavy; no stretch if too light). I started with 20 pounds, went up to 55 pounds. Eells started with 30 pounds and went up to 75 pounds.

Jim Evens used 17 1/2 pounds with 43 and one half chest at 145 pounds bodyweight. Breathe as deeply as possible as the weight is lowered to the floor.

Any exercise you use is OK so long as it doesn’t sap your nervous energy for the DKBs. The Deep Knee Bend should be last or nearly the last on your schedule. Stiff Legged Dead Lift has no development effect except on trapezius. SLDL works on the spine as a curative exercise.

Use 20 reps 3 or 4 times a day with light weight of 50 to 120 pounds on hopper. As a power exercise 5 to 7 reps is best. Regular deadlift is used to start in order to set the muscles for the SLDL.

7 is the maximum reps as it is difficult to do more without double breathing. If more than 7 can be done without difficulty the weight is too light and if 5 cannot be done it is too heavy.

SLDL on a hopper is the best grip exercise of all but it takes about a month for the finger strength to catch up with the back power.

A good deadlift is, or should be, about 5 times as heavy as bodyweight. The possible maximum deadlift in 10 years of exercise: 1200lb for an adult.

William Boone used SLDL to rest up on. Eells and I consider it the greatest exercise of all. Eells is the fastest man I ever saw. Terry never uses a weight heavy enough to show his maximum speed SLDL is not necessary for a developer unless you have a bum back or if you are extremely slow and clumsy. But it is of maximum importance to a lifter.

Exercise no oftener than every other day. Four times in weeks is OK also If you do not feel the best. Skip a day. I could tell on myself any difference in results from four times in 2 weeks from that or seven times in 2 weeks because I raised poundage as much in 4 periods as in seven. 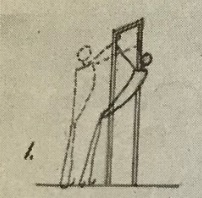 Chest stretcher in doorway invented by John Grimek. Stand with feet about 1 inch from door, rest hands above doorway. Keep arms straight and sag forward with chest as far as possible while breathing in as deeply as possible. Repeat 20 times. Keep hips back as much as possible. In alternate kettle bell press one arm should be lowered fully before pressing with other arm. Do not pressing with other arm. Do not try to push one up as the other comes down. 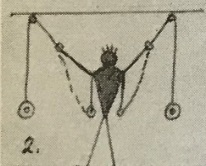 Pulley exercises are the best for the upper back and pectorals of upper chest. They take little energy and throw the strain on the muscles you desire to exercise. Do not use enough weight to cause you to lean and thus do the exercise improperly. Add weight in one and a fourth and two and one half pound jumps.

Use shoulder shrug for slope of shoulders and neck. Use chains and kettle bell handles and stand with one foot behind and one in front of bar so as to avoid dragging weight up front of thighs as when bar is held in front of both legs in hands.

Also much more weight can be handled in this style. Up to 400 or 500lbs can be used. Shrug uses very little nervous energy. Repeat 25 or 30 reps.

The Hopper
A hopper is made of one heavy bridge plank three or four inches thick and 10 to 12 inches wide, about 6 ft. long with a piece of 2×4 under each end and the middle to raise it off the floor and give it some spring. It must be bolted together to make it solid and set perfectly level so the weight will bounce straight up and down, not sideways.

If you can’t get a bridge plank two or three two in. boards may be bolted together. To cut down on the noise it will make and give more spring, an old piece of truck tire may be spread out flat on each end where the weight hits and nailed down with the tread side up.

The plates should be on your bar fairly close to the little fingers of your hand when you grip the bar. If you use some small plates, put some of them on the inside as well as on the outside of the large plates, to lessen the chance of your bar bending down on the outer ends.

Four or more Dodge fly wheels make good hopper plates. Bolt two together and put on each end. You may get Dodge flywheelsat any car wrecking plant or junk yard for a few cents each. They weight about 60lb so they make good and cheap weights. And as good as though you paid 10c per lb for them.

Off-set kettlebell handles are made in the shape as shown in the Teegarden photos and any good blacksmith can make a pair for about a dollar. You hand the plates on the hook which eliminates the use of collars and keeps the plates from rubbing your arm.

THE DEEP KNEE BEND BAR
The DKB bar should be of 1 3/4 in. stock, and 7 1/2 ft. long, turned down to 1 1-16 in. one foot on each end, bent in 5 places, balanced at the middle bend and have a 4 inch arc. When it is bent in this shape it fits the back of the shoulders and instead of rolling up your neck when you squat it will hang in one position. See Illustration.