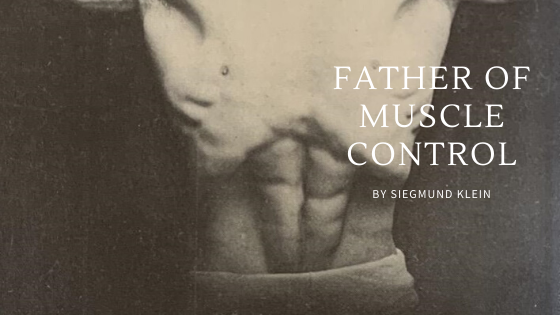 The following article was published by oldschool strongman Siegmund Klein in 1960 – Mr. Berg

“Once again it is my sad task announce the passing of one Muscledom’s most beloved athletes. Otto Arco died May 24th at the age of 79. He had been failing health for the past year or so.

Much has been written within these pages about this famous personality. But much more could be written, and still not enough would be said, because Arco was one of the mightiest this game has ever produced. 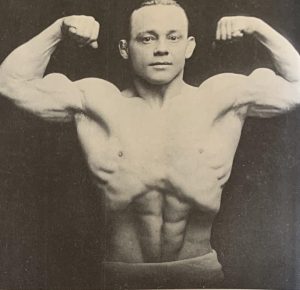 What a thrill it was to see the Arco Brothers do their balancing act, and what a bigger thrill it was to see Arco go through some poses and muscle control feats. I never forgot this. And later, when I opened my gym in New York, Arco used to come up frequently and often demonstrated for me and members of my gym, his remarkable control over his muscles. In fact, he was the first man I saw perform the muscle control stunt known as the “rope.”

Arco was a master at isolating muscle groups and controlling any muscle in his body. Otto Arco was born in Poland in 1881. Gymnastics were compulsory in the school he attended, and as a result young Arco became such an expert on the high bar that he won a number of important championships in that event. At 18 he began to wrestle professionally and quickly became exceedingly proficient in this field. 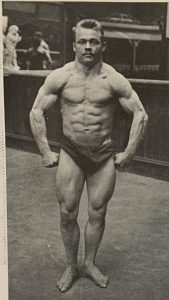 His physique was symmetrical and well proportioned, so much so that he won the title of the World’s Best Built Man in Paris in 1913. He posed for many artists and sculptors in Europe, including the famous Rodin, who was amazed by his muscularity and pleasing proportions. As a result of his extensive travels and sharp mind, Arco become quite a linguist, capable of speaking, reading, and writing in several languages.

At about the time of his victory in the physique contest in Paris, Arco became interested in developing a vaudeville act. Together with an old friend of earlier days, Emile Magyorosy, he formed a fine balancing act. Since Arco was the lighter, more agile of the two, he made a splendid top mounter. Later, when these two parted company, Arco’s brother, Pete, came into the act. Together these two did some remarkable stunts. One feat in particular drew much attention and praise, and I don’t know of any other pair who could duplicate it. While holding his brother n a high hand to hand. Otto would slowly bend backwards until his head touched the floor, in the wrestler’s bridge position, all the time holding his brother in the handstand. From this position he would come up to a standing position. 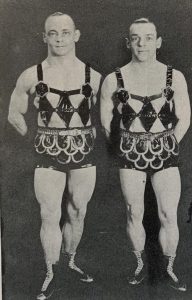 This was truly an amazing sunt of flexibility and balance. The Arco Brothers travelled the vaudeville circuits for many years. As other forms of entertainment grew more popular and vaudeville wanted, Otto and his brother retired from show business. As a matter of fact, their final show was in Hazleton, Pennsylvania, just about 150 miles northcast of York.

Arco was exceptionally strong for his size. He was the first man to continental and jerk double bodyweight. At 137 he lifted 278 pounds in this fashion. On another occasion he jerked 300 pounds. At the same light bodyweight he pressed 228 pounds in strict military style and 237 pounds in continental style. This lift, 100 pounds more than bodyweight, was performed in the presence of Emile Deriaz and Lionel Strongfort, two other professional strongmen of repute. In those days only beefy heavyweights pressed in excess of 200 pounds. Mighty Arco was by far the lightest man to perform this feat. He was also the first man to snatch more than bodyweight with one hand. At Adelaide, Australia, in 1907 he snatched 145 pounds while himself weighing only 138. His form in all the lifts reported that he exhibited great speed and grace.

In Vienna, Austria, at the turn of the century in what we may well term the Golden Era of Strength, Arco was in company with all the famous Oldtimers. He trained and discussed trade secrets with such men as Prof. Siebert, Maxick, Hackenschmidt, Prof. Desbonet, Lurich Zbyszko, Steinborn, Steinbach, and other outstanding strongmen of those times.

Arco had many talents and interests. Best known was his deep interest in stamp collecting. Few people, however, knew of his ability as an ornamental tinsmith. Most of the helmets, breastplates, and even a chariot used in the act were made by Arco personally. He pounded out by hand many of these things between acts behind stage, or in his hotel room. A meticulous artist, he was satisfied with nothing less than perfection. Hour after hour would be devoted to these pieces of handwork until they were just right. He was also a very talented artist. A number of his published photographs were skillfully embellished with additions such as swords in hand, robes, pillars and columns, etc., so realistically drawn in by hand that it was difficult to differentiate between the additions and the original photo, though I must make a point of adding that the muscles strictly his own and not the product of his brush or pen. In many of his photos Arco’s body has the appearance of statuary rather than simply of human flesh.

His interest in music was profound. He could name the compose of almost any classical piece he heard, and was even able to identify the opus number and movement being played. His interest in fine music was due, no doubt, to his living in Vienna, a city fames for its music.

Otto Arco’s interest in the strength game never diminished. After he retired from active participation he frequently attended strength shows as a spectator. The last big event he witnessed was the contest between the Russian and American lifters in Madison Square Garden two years ago. After that he still visited me in the gym from time to time, and we had frequent telephone conversation. Only a few weeks before he died I talked to him about joining me for the trip to York for the picnic in August. Otto was looking forward to this trip with eagerness. It was a big shock to me when his son, Teddy, called up to me the sad news of his father’s passing. I’m sure that all of us in the World of Weights and Muscle will miss this grand athlete and personality, who was an enthusiast to the end and beloved by all”