Paul Anderson And His Youth Home 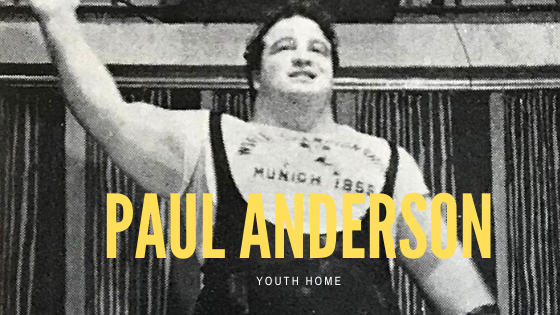 The piece of lifting history was written by Peary Rader around 1960! Mr. Berg

“Yes, Paul Anderson is a big man, and he has a big family. Seventeen boys and girls have found a home with big loveable Paul Anderson and his tiny, attractive wife, Gelnda. 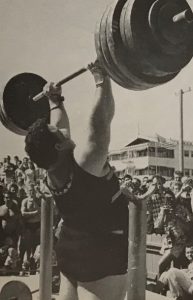 Few people doubt that Paul Anderson has been and still is the Strongest Man that ever lived. Paul, who used to squat with 1160 twice a day in a show and who has jerk-pressed 560 and pressed 480 from racks. But this story is not Paul’s lifting feats which have appeared often in Iron Man, but rather about the great humanitarian work, about the great dream and amibition Paul has for the future.

Paul Loves children and has been greatly interested in helping young people in the teen age bracket who have no homes or who may have had some difficulty. He feels that this age has been greatly neglected as most people are interested in the smaller children of adoptable age. Paul feels that these teen agers need help and guidance even  more than any other age group because they are at a critical age when they need guidance, understanding and low.

Paul has talked of the home he wanted to build for these children for many years. All his efforts have been toward raising the money to get started in this venture. He has put on hundreds of shows and traveled all over the country to obtain enough money to open his home in a modest way.

Paul has discussed his home with various members of the Georgia legislature and hopes that the state will establish a State Department of Youth. Paul and Glenda, both natives of Toccoa, Ga., chose Vidalia, Georgia, for their home because “the people of Vidalia believed in what we were doing and were eager to support us.” 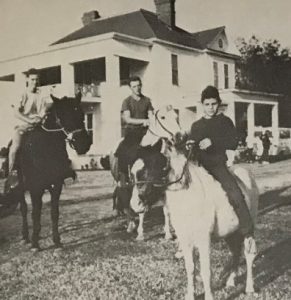 The home was started in temporary quarters early in 1962, then at a later date a 56 acre farm and large mansion type house became available on the outskirts of Vidalia.

A lot of remodelling was done with volunteer help from local people, and much of the furnishings also were donated. Of course the teenagers assisted a great deal in these preparations for their new home. This new home was officially dedicated December 9th.


Although the initial funds for the home were raised by Paul himself, there are now over 200 contributors who assist in this work.

A Mr. G. H. Achenbach, president of Piggly Wiggly Southern Inc., is chairman of the board for the home. There is no regimentation at the home who they have restrictive rules the youth follow. They try to make it as much like a normal family as possible. Spiritual guidance, education and physical fitness is emphasized at the home.

The young people attend the public school just as any other normal child would. They participate in the social functions of the community and attend the local church services according to their religious faiths.

The girls assist Mrs. Anderson in cooking and caring for the house while the boys are occupied in their spare time with chores about the farm.

The girls prepare breakfast and after breakfast the boys go to school on their bikes while Mrs. Anderson drives the girls to school. During the summer months many of the teen agers have jobs. 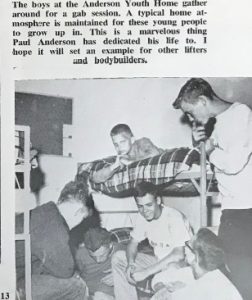 There is a definite physical fitness program at the home and the boys participate in school athletics. Weight lifting is not emphasized at the home but Paul does instruct some of the boys who have asked for it and Paul maintains his weights in a back shed where he can take his own workouts.

We salute Paul Anderson and his wife Glenda for the great work they are doing. Not only is Paul the Greatest Strong Man, but he is a Great and Unselfish Man who will make a great name as a humanitarian as well as a strong man.

His unselfish dedication to his fellow man makes us proud to know him and that he has been a part of the barbell game. He brings credit and honor to the weight game.

Paul has applied for re-instatement as an amateur that he might represent this country again as a lifter and bases his application on the fact that all his professional appearances have been for the purpose of raising money for his youth home. We wish him luck”