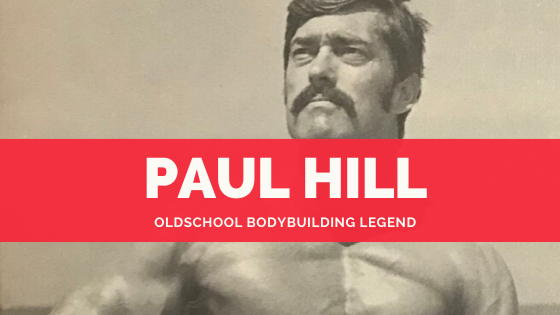 Oldtime-Bodybuilding legend Paul Hill won the Mr. USA title in the year 1973 and the Mr. Pacific Coast contest in 1969. Here’s his story and workout, have fun – Mr. Berg!

Paul Hill had his first introduction to the weight scene in 1965 when he was in the service and the only weightlifting facility that was available was in the laundry room. It was very hot in there. Believe it or not they made their first bench press out of old ironing board. They worked out three days a week for the upper body. As they did not have any squat racks Paul ran the other three days for his legs. As crude as this routine sounds, the first three Months he gained over 15 pounds of solid muscle. 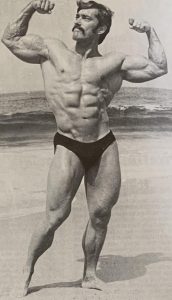 Paul Hill met Frank Zane on the beach one day. He was a big help to him and offered him encouragement. He met him a few years later out on the west coast and he couldn’t believe Paul was the same skinny guy who plagued him with questions that day on the beach.

Two years later, in 1967, he was discharged from the service and he returned home to Ransomville, New York, a very small town outside of Nigara Falls.

A few months after he got home from the service he entered a Mr. Niagara Falls held at the YMCA and was fortunate enough to win. Soon after he competed with guys like Tony Pace, an extremely muscular fellow and Jerry Dottriel.

Jerry Dottriel was one of the first Teen-Age Mr. Americas back in the early 60’s. Jerry was a great guy and helped Paul out a lot!

Paul then moved back to his hometown area of Nigara Falls, New York and with consistent training at a local Y jumped his bodyweight 20 pounds in two months and won his height class in the Novice Mr. New York contest. Paul entered about six more contests in the New York area and then moved to Houston to work for NASSA.

It was here he met his lovely wife Carol. They were married in 1969 and that same year moved to California. As Paul puts it.
“Carol is a great gal and deserves a lot of praise. She has been very supportive, a real helpmate – she is solely for me. Bodybuilders need a very supportive mate. If the wife is not interested it can create problems. I have been very fortunate.”

In the 60s he got a job with Bel Aireo Systems and they transferred him to Houston. He was a technical man on a lunar training vehicle that they were building for NASA.

He competed in several contests down in the Texas area and this is where he met Casey Viator for the first time. He was second to Ed Thompson in the Mr. Texas Contest. He continued to live in Houston until January of 1969 when the job played out. Instead of going back to New York, he decided to try his luck in California. The first job he was able to land was that of a cab driver.

Paul Hill told this story: “One time he picked this chick up over at Universal Studios and knew he had seen her some place before but just couldn’t place her. Man, she had a body that was out of sight! In the course of the cab ride she told me that she was starring in the movie “Beyond the Valley Of The Dolls” and that she had been a centerfold in PLAYBOY. Sure enough, that’s where I had remembered seeing her!”

In 1969 he decided to enter the Jr. Mr. America; this was the year Boyer Coe won. The contest was held in Long Island, New York.

After the Jr. Mr. America he really was inspired and returned to training hard. He entered a few contests, but always had the ups and downs. He could never understand, with the same men in most of the contests, how the placing could be so different in each one

He entered the Mr. California that year full of confidence. However, he was really depressed after failing to place at all. He had almost decided not to enter the Mr. America but at the last minute decided to enter anyway. He was able to place 6th and what made him even happier was the fact that the second place man in the Mr. Cal, the contest he had failed to place in, came out 10th. This gave him more confidence in himself.

This was the time he decided that he would not enter any local contests again and just concentrate on the national competition.

1973 Paul Hill won the Junior Mr. America title. But actually the Mr. America was a real shock to him. He went there with the intention of being in the top three. When they announced him the winner he wanted to jump with joy!

The Mr. America went pretty well. But this contest was controversial, many people felt that Pete Grymkowski (see above the greate picture) should have won.

In the 70s Paul trained at Vince’s Gym in North Hollywood. He trained there for about 2 1/2 years. In the same year he won the Mr. USA title. Paul Hill was really excited winning both of these. Paul Hill retired in the end of 70s.

As to diet Paul hits a very strict high protein diet that he deviates from only once a week and supplements very heavily to make up for any deficiencies.As to other interests, Paul is an avid chess player and has played since the age of 8. He is also a cycle enthusiast and has a 750 Honda that he and Carol ride on weekends. An interesting side note is that he is able to run the 100 in 10.3 at a bodyweight of 220 as compared to his best of 11 seconds in high school when he was much lighter.