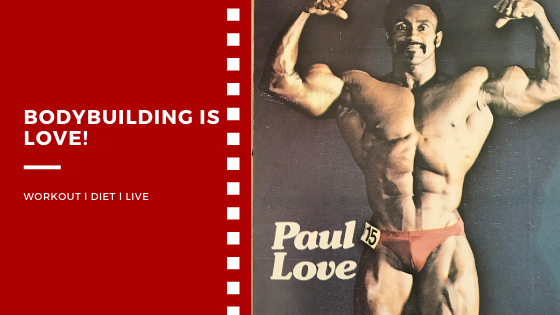 “I love everything about bodybuilding or I wouldn’t be in it” says Mr. America Past-40, Paul Love.

He had been involved in bodybuilding for several years and finally decided to shoot for the big-one – the Mr. America Over-40 competition.

By all means, when Paul Love won the 1980 Masters Mr. America in Atlanta, Georgia, in July, he deserved it. And the victory was the result of lots of time, commitment, and dedication.

“I just set my mind on entering the contest and decided to go all the way.” Love recalled. “I sat down with my wife and we discussed it. I decided to go for it, and I knew it would require plenty of time. I hardly worked at my job during the training period. I trained six days per week, with a split routine.”

Aside from being a title-winning, competitive bodybuilder, Love is the owner and manager of Love’s Health Club, 3050 Story Road, San Jose, California. And Love has presented bodybuilding shows throughout California for nine years.

“Bodybuilding is a sport, but it turns into a business when you look at it from the financial aspect of promoting shows and contests,” Love said. “I’ve competed many times, so I know what it’s like being on the stage and in the gym. It’s tough. It takes lots of time and dedication.

“I’ve been learning more and more about the ways to present a show, and the number-one thing I’ve learned is that you have to give the people what they want. It may sound simple, but it’s not.”

His first show was in conjunction with the YMCA in 1971 when, together, they presented the Mr. Pacific Coast Competition. In 1974, after two more shows. Love presented the show without the YMCA’s assistance and it out drew all previous promotions in the area.

According to Paul, the toughest aspect of promoting bodybuilding is getting proper media coverage and publicity. He can’t understand why many members of the media frown on bodybuilding.

“It’s almost as if some of the sports writers and telecasters still have the impression that title-winning bodybuilders are muscle heads.”

Love said, “Maybe thirty years ago that was pretty much the stereotype, but things have changed greatly since then. But some people’s attitudes haven’t changed, I guess.

“Newspapers and radio stations seem eager to take my money when I want to advertise, but when it comes to running a publicity photo or writing an article on one of the bodybuilders, they often refuse, claiming that ‘There’s no room,’ or ‘people aren’t interested enough’

“I know for a fact that more gym are opening around the country and more people are becoming interested in bodybuilding than ever.”

Love often makes great appearances at lectures for high schools and colleges, about bodybuilding. He attempts to encourage them to get in shape and start working out.

“The place to begin encouraging would-be bodybuilders is at the schools where younger people attend, because they’re tomorrow’s future. These young people could get serious and become the title-winners of the ’80. I’ve encouraged several teenagers to train, and many are working out at my gym currently. Who Knows? They could go far.”

At lectures and seminars, Paul discusses the advantages of working out to stay healthy and look good. He demonstrates how to exercise and what to do to remain on a proper diet, and he tells students the advantages of being a bodybuilder.

Love enjoys working with children as young as 14, “If they can throw a baseball, they can lift a weight.” he says.

Bodybuilding can be totally controlled. You can put as much tension on the arm, for example, as you like. You can control the weight. Naturally, I’ll write up a beginning program for a 14- or 15-year old, and it won’t be too strenuous. As they get older and more experienced, naturally they’ll get bigger and their program can be increased.

“I don’t approve of the bigger names of today openly admitting and bragging about their use of steroids.” Love said.

“It’s not good for the younger teenagers because they see the bigger men using them and they want to try it also. I know of a few teenagers on steroids, and it’s bad for them. There are plenty of bodybuilders these days who don’t use steroids, and they look fantastic. You can achieve success in bodybuilding without steroids.”

Love has been a Santa Clara County, California, probation officer for seven years. He likes it because he has a chance to work with kids. He’s talked many kids into joining his gym and working out. He allows some of the kids to work out for free just to get them interested, and to keep them off the streets.

Training is excellent for kids like this because it builds their self-confidence. Most of these teenager are persistent, and according to Paul, once they begin working out. they stick with it.

Love opened his gym in May 1979, and as he says, “There were more headaches than I anticipated. There are still problems. The gym isn’t bringing in enough profit to support myself and my family – enough to where I can quit my other job. So I can’t put in as much time as I’d like to.

“Most of the members want me to spend time with them, and It’s hard. I don’t have time for every member, and I can’t donate enough time to everyone as I’d like to,. My philosophy is that the customer comes first. My wife Janet and stepson Steven are a big help at the gym, and they help out with almost everything. 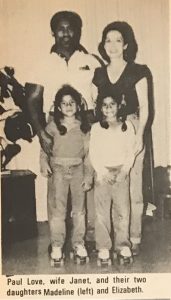 Love’s family is more important to him than anything, he says. He’s the happy husband to Janet and the proud father to their twin daughters, Madeline and Elizabeth.

He was born in Boyle, Mississippi but left in 1959 after graduating from high school. He starred in football while attending Colorado State University. After his college eligibility ran out, he got interested in the construction business, then came to California in 1968. He graduated from San Jose University in 1973, earning a bachelor of arts in Physical Education.

Love become interested in weight training in 1961 while playing football. He was performing regular workouts and saw tremendous muscle growth, which sparked his interest.

He ran into actor John Amos, who starred in the TV film, Roots and the two began training together. Amos won a bench press contest in 1964, pressing 320 pounds. As Love looks back on it, he had no idea he would have gone this far with bodybuilding.

In 1965, he became serious about training regularly. he glances at the various muscle magazines to find different training program to determine which ones would be most appropriate for him. Paul met Bill Pearl in Denver in 1966, and Pearl gave advice.

In August 1966, Love placed third in the Mr. Colorado competition. He was told that the competition would be tough, but it made Love want to train even harder. It gave him more incentive.

He attributes much of his success to powerlifting. He says powerlifting is a fantastic basis for bodybuilding because it develops muscle density.

Love stressed the importance of maintaining a regular diet. “You can lose or gain weight, and cut up from the proper diet,” he advised. “Lots of carbohydrates build energy and supplements are important. I believe in vitamins E and B-12 for energy.

“Someone who has to lose weight should be put on a conditioning program. I can give the same routines, but there should be more repetitions. Stay away from pastries, but eggs are excellent. Avoid fried foods, and always eat breakfast – it’s the most important meal of the day because It’s the one you start off with.

“As far as training goes, the more you sweat, the more weight you lose. I usually instruct people to wear a sweat suit. You shouldn’t be concerned with posing when you start out: wait until you get in pretty good shape, then you can begin to develop your own posing routine.

“It’s important to know how to pose. My favorite poser is Ed Corney because he seems to pose so naturally and he’s smooth with his routine. Bodybuilders should practice their posing together and critique each other. A good poser should practice his posing for about a half-hours each day, five days per week.”

Love’s diet, when training for The America, consisted mainly of chicken, fish, and eggs. The following is his contest diet: 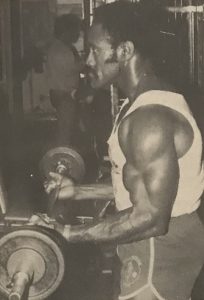 This routine is for the serious dedicated bodybuilder, designed to attack and put stress on the cardiovascular and muscular system, that requires great endurance. It’s called “the breakdown system” performed one to two times per week on each body part with one to two days’ rest between workouts. For example, the chest back and shoulders should be done on Monday and Thursday. Use your regular workout routine between days, so you’re training six days per week.

No more than three sets should be performed per body part, with three different weights per set. For example, on the bench press take one warm-up:

This is performed with a total of three sets. Each set is done with three different weight levels. You can increase the poundage if you can still do the required repetitions.

In a regular breakdown routine for maximum definition, perform as follows:

Paul Loves says the most effective exercise to develop the chest is the dumbbell press, because it gives a full range of motion to the chest. He also recommends flyes. Leg Presses, he says, are excellent for leg development, because they isolate the legs from every other body part.

Preacher curls are good for the biceps and standing curls, again because they isolate a specific bodypart from the others. For proper ab development, he does crunches and Roman-chair sit-ups. To cut up or bulk up he recommends the body parts be isolated from the rest of the body.

And Love is far from egotistical. Those in the field respect him and admire his accomplishments because they know he’s willing to work hard for himself in particular, and the sport of bodybuilding in general. He is soft-spoken with a kind, warm personality that’s easy to become fond of.

He says the stomach is one of the most difficult areas to get in shape. If you don’t have the abs, there’s hardly any sense in competing.

Competition and the love for the sport are what keeps him actively involved in bodybuilding.

“I love everything about bodybuilding, or I wouldn’t be in it” Love said with a smile. “If you’re an athlete, and you like to compete and you win, it’s a great feeling – a great reward.”

source:
Text by Wayne Corvello, published in Muscle Up 1981 June