“Paul Wrenn is a name familiar to everyone associated with powerlifting. His pictures have appeared frequently on the pages of this magazine, including the March, 1999 issue where he is seen on page 24 setting up for a successful 942 pound squat at the 1981 World Championships in India.

In this interview we talk about the past, the present, and the future of one of the all time great superheavyweights. Paul not only lifts recreationally, but lifts in connection with his work as an evangelist. He regularly gives lifting and strength demonstrations in order to get the attention of his audience, and to illustrate spiritual truths. I can bear witness to the fact that the room was packed and everyone was captivated by one of these exhibitions at the USA Powerlifting Masters Nationals as a couple of years ago.

Paul does a good deal of prison ministry, and speaks frequently in churches and at camps. He says that people like to joke about him having “a captive audience” at the prisons, but in fact, the prisoners do not have to attend. 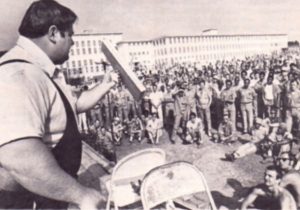 Since lifting is very popular in prisons, he uses this as a means to attract an audience. Paul says that his goal in all of his appearancae is to proclaim the Gospel of salvation from sin through faith in Jesus Christ.

After spending several years in the Army, Paul married Barbara, who teaches history and math at Bible Bapist Academy in Clarksville, Tenessee, the Wrenn’s hometown.

They will celebrate their thirtieth anniversary this August. After their marriage Paul worked his way through Mid South Bible College and Tennessee Temply Seminary. He is currently working on a doctor of ministry degree at the latter institution.

Question: How did you get started lifting, and how old where you at the time?

Paul: I started working out when I was 13 years old. My grandparents raised me in Burlington, North Carolina. My grandfather was a professional long distance runner, but employed weightlifting in his training.

This, of course, was very unusual in those days. Since he used to get Strength & Health and the old Iron Man magazines, I started reading these. My goal at first was to look better, and I was succesful at this, but the longer I trained the more I became interested in strength.

Paul Anderson had just broken on the scene when I was young, and not only did I read about him, but I got to see him in person, and he greatly inspired me. I gave up on looking pretty, and pursued my goal of strength!

When I got out of the Army at 21 years of age, I only weighed 185 pounds. I started competing after I was married, and by that time had put on enough weight that I competed in the 242 class, although it was a while before I reached the limit of that class.

Shortly thereafter I found that I was having to cut weight to make 242, so I decided to go superheavyweight. In those days there was no 275 class, and I competed as a very light super. In fact, I went to the World Championships in 1972 in Harrisburg, PA at 268lb., and lifted against Jim Williams, John Kuc and Don Reinhoudt.

This was the year that Jim Williams benched 675. It goes without saying that I got fourth place! After that I grew into a full superheavyweight, and did my best lifting weighing 340.

Q: What are some of the titles you have won and records you hold?

Paul: Prior to getting involved in powerlifting, I was an All South Olympic lifter in the 242 class. I snatched 300 and cleaned and jerked 369. As far as powerlifting is concerned, at the 1974 Seniors I took second place. In those years there was only one powerlifting organization in the United States. 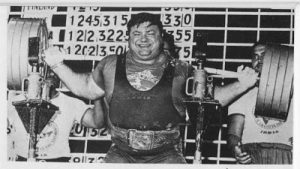 In 1981 I won the World Championships. As a master lifter I have been National Champion 12 years in a row. Someone said to me, “You can’t go o winning indefinitely,” My response was “Why not?!”

Q: What are your best lifts?

When I did come back, as a masters lifters, I did not notice too much change in my strength, but I must say that since I have turned 50 I notice a bigger difference.

Q. How did you get involved with USA powerlifting (The ADFPA)

Paul: I got involved with the ADFPA when I turned 40. My first national meet in this organization was the National Masters in Missisippi. Before the lifting began Brother Bennet approached me, handed me, in the presence of the other lifters, a record application. He said, “You’ll probably need these. And I did.”

Q: What are your views on drug usage and drug testing?

Paul: Many guys that I competed with are not with us anymore, and I believe that in some cases this is because of the side effects of drug usage. I made a commitment to drug free lifting when I came back as a masters competitor, and I will only lift under drug tested conditions. My theory is that I can beat a guy in my division, but I can’t beat his pharmacist. I believe that out of meet testing is great, and is the only answer to the drug problem, but I have heard that there are designer steroids that cannot be detected.

Q: Do you use any supplements or follow any special diet?

Paul: The only supplements I take regularly are creatine and vitamins. I especially believe in vitamins because of all the traveling that I do, and the effects this has on my diet. I injured my shoulder this past year, and to aid the healing process I have been taking glucosamine, at the recommendation of Joe Hood.

As far as diet, I try when I’m puhsing real hard to get a little more protein than usual. I have a slight problem with diabetes, I take a pill for it, and I try to keep my carbohydrates lower than I used to, especially the simple carbohydrates

Q: What are your goals in powerlifting?

Paul: I still enjoy competition.It’s fun, and it’s especially fun when you win, but I am also very motivated because the competition helps my ministry. So, I still work out pretty hard. I’ve won a National Masters title for twelve years in a row, so my most immediate goal is one more. I squatted 661 reccently, and I’d like to do a little more.

Q: What is your training program?

Paul: I squat on Monday, bench on Wednesday, and deadlift on Friday. In the squat I do the first 6 weeks of my 12 week cycle without any equipment, except a belt. I use a loose suit for a couple of weeks, and then I wear a tight suit for the last 2 to 4 weeks. I only use wraps for the final 2 or 3 workouts.

I do not use high reps, but stick mostly with triples, working up to one heavy set each workout – a triple, a double, or a single, depending on where I am in my cycle. Then I drop back and do four sets of triples in the box squat

For assistance I do some stiff legged deadlifts. I bench press on Wednesday. The biggest difference in my training program now, as compared to when I was younger, is the way I train the bench.

I have modified this because of my shoulder injuries. I am using some of Loui Simmons’ ideas, but have modified them somewhat. I go up to a heavy single every workout, but it is not an absolute max weight. Then I drop back and do five triples with competition grip, and then four triples with a close grip. I use lighter weights in these sets. I get a good workout, but do not stress my shoulders.

I cycle the weights in these sets, adding about five pounds per week. I rest for about 60 to 90 seconds between sets. I will also do a few lockouts, just to get the feel of the heavy weight.

As far as assistance work, I have been adding some rear delt work recently in order to strengthen my shoulders. I use an exercise that Louie Simmons recommends, where you use that lat pulley machine, and pull toward your face. I might do one or two sets of curls. In my Friday deadlift workout I usually do 6 sets of 2 to 3 reps, which I cycle, moving the weight up a little bit each week. For assistance I do some shrugs and bent rows.”