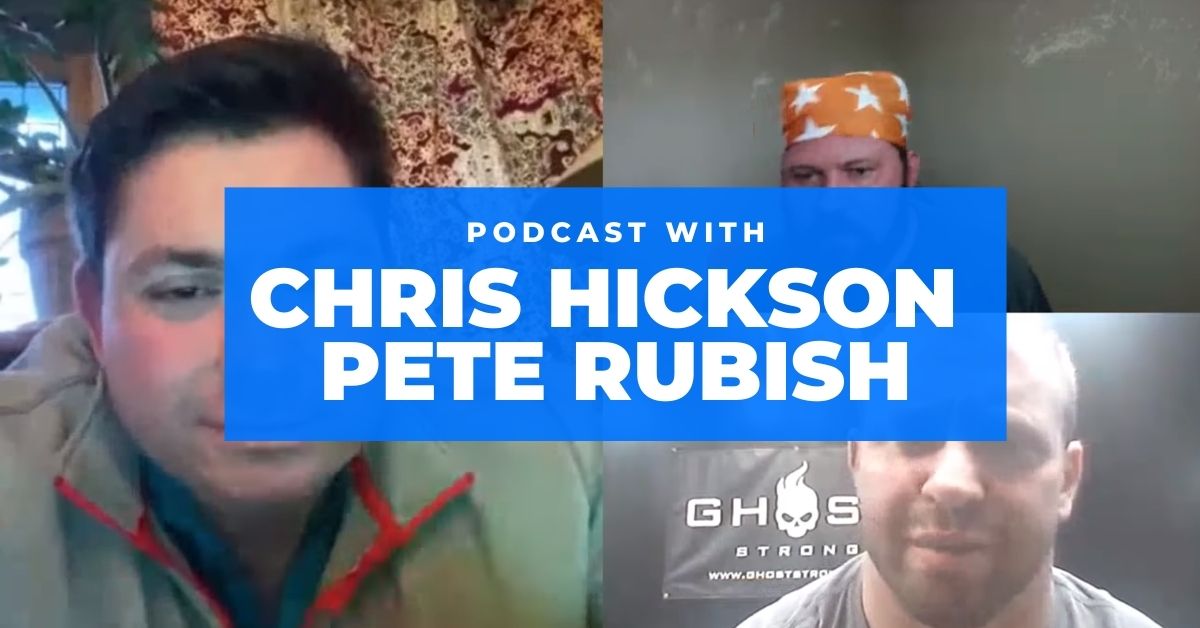 On April 26, 2020, Pete Rubish released a podcast style interview on YouTube of Chris Hickson. Pete has an excellent podcast with co host Scott Davenport. Chris, like Pete was an Uber deadlifter even as a teenager, hitting over 800lbs at age 18 with a hook grip. Chris did this interview after recently being released from Federal Prison for his involvement in importing, manufacturing, and distributing anabolic steroids in violation of Title 21 United States Criminal Code.

Chris is well spoken, animated and candid in his description of how he ended up in prison. Chris came to the Powerlifting public’s attention almost ten years ago lifting with the legendary Lilliebridge family, Derek Kendall, and Pete Rubish in the Illinois area. Chris was sentenced to 24 months but actually served 25 months due to his illegal use of a cell phone while incarcerated. At the time of this interview, Chris is still on probation and has been working hard to find employment, which is a requirement of his probation.

What happened to Chris Hickson and How He Ended Up In Prison?
After his online lifting videos received notoriety, Chris realized that he could make a lot money supplying the steroids that many who contacted him through social media were interested in. In November 2014, Chris’ residence was raided by Homeland Security Investigations agents. There were 6 agents who had trouble with carrying the pill press down a flight of stairs. Chris references money he shipped to China in order to obtain steroids. Chris detailed how there were 30 Federal agents present at his house when the door was breached to apprehend him. Ironically Chris said that when he was selling steroids he had more law enforcement officer customers than he did felons, estimating that he sold directly to 10 officers, with many more officers having their buddies buy from Chris for the officers.

After Chris was arrested he was on pre-trial release for 3 years awaiting a plea bargain. Chris ultimately plead guilty to 2 felony counts of manufacturing a controlled substance, not the 5 felonies he was originally arrested for. At the time of his arrest, Chris had a clean record. Chris was arrested when he was 22, and by the time he served his sentence he was 28 upon his release.

Chris served his time in approximately 7 or 8 Federal correctional facilities around the country, at one time being transferred from a camp level facility because he was caught with a cellphone which are illegal in prison. As a result of being caught with the cell phone, Chris was placed in solitary confinement.

Prison life
Chris described prison as extremely boring, with his first month in prison spent sleeping 20 hours per day as he was not allowed to use a prescribed anti-anxiety/ ADHD pharmaceutical cocktail that he had been using since his arrest. Chris was also recovering from a surgery to reattach his four quadriceps tendons he had detached. Chris said he was never a reader until he got to prison, but once there he would read daily, usually for two hours in the morning. Hickson told Rubish that he would wake up at 7 or 8 am, read for two hours, walk around the yard before eating lunch and then taking a nap. In the evening Chris would play softball, which would end his low stress day. Although he described his daily life as low stress, Chris elaborated that his time in custody was mentally taxing because he was not able to achieve any goals- he simply existed.

At 6 foot 7 inches tall and 280lbs, Chris said he did not get in any fights in prison, but he saw plenty. He also joked that he was never sexually assaulted in any “shower action” like you see in the movies. The guards in prison would avoid fights because they were out of shape and just needed the job.

Chris told Pete that the food in prison was terrible, staples had primarily all high sodium content so as a result every inmate has high blood pressure.

Chris met approximately 5 convicted murderers while in custody and was able to socialize with in order to make the time go by quicker.

The positive side of doing prison time
Chris said that following this experience he can definitely run a business, because he did run a business-albeit an illegal one. Hickson said he is a much more patient person since being released from prison, primarily due to having to wait 12 hours before you get your cell to yourself. Being incarcerated taught Chris self discipline.

Future goals
Chris is visibly excited about being a free man, being able to do whatever he wanted at any given time. Chris wants to get in great shape now that he can eat healthy again and would eventually like to get strong again. Hickson is mandated to get a job and once he does he will not be able to sit around all day resting and eating like he did when he was at his strongest. Listening to Chris, the viewer cannot help but route for him to completely regain his health as well as to lead a productive life due to his positive and sincere nature.

I would advise any young person who is considering getting into the business of illegal steroids to listen to this podcast and make informed decisions before they get involved in anything that could compromise their freedom and future.