With the beginnings of World War II in 1939, Europe’s weightlifting establishment was forced to endure a seven year break from international competition. On our side of the Atlantic, several top American lifters of the late 30’s and early 40’s were also affected by the war and wound up in the military. Despite World War II’s adverse effect on weight-training in general, the 1940’s marked the real beginnings of the so-called “odd lift” era.

Use of the “odd lift” moniker started during the 1930’s in order to describe any movement other than the Olympic lifts and included not only the power three but dozens of other exercises like the barbell curl, behind the neck press, and upright row. Interestingly, it wouldn’t be until 1959 that the AAU was asked to consider renaming the odd lift category as either the “power” or “strength” lifts.

Whereas in previous decades squats and deadlifts had gained considerable notoriety via mixed format competition, they had yet to match the Olympic lifts for popularity. Accordingly, there seemed little need to separately accommodate these two lifts with their own venues and events. It was during the 1940’s however, that these two power movements, along with the bench press and other odd lifts, began being more frequently lumped together in contests. 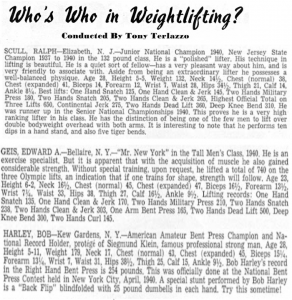 In the above mini-biography appearing in Strength & Health during the 1940’s, it’s apparent that weightlifters are practicing some of the power movements in addition to their regular overhead lifts: nearly every one of the profiled weightlifters has a max deadlift and squat to their credit. Most have a max barbell curl listed as well but only a few have anything listed under “supine/prone press”. 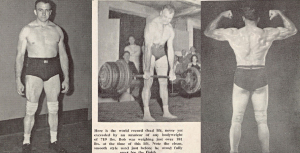 One very famous odd lift pioneer from the post-war period was Tennessee native Bob Peoples. Officially credited by the AAU as the first man to pull 700 lbs, Peoples managed this ponderous feat while weighing only 185. His best effort would be 725 in 1949. In his 1979 training manual Developing Physical Strength, Peoples makes reference to Hermann Goerner, Rigoulot, Podolak, Pepke and Terry as deadlifting role models. 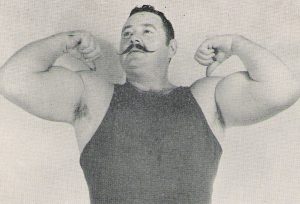 The west coast giant: IAN MAC BATCHELOR. Those arms are over 20 inches and that chest stretches the tape to near 53 inches normal. He is 6′ 2″ and weighs 290. Mac is considered the wrist wrestling champion as he daily takes on all comers and there are a lot of them. 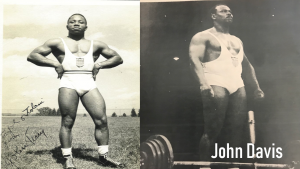 Some of Bob Peoples’ lifting contemporaries were also very good deadlifters: 1930’s weightlifting star John Terry (132 lb class) managed to move his lightweight deadlift record up a few notches to 610 lbs in 1940. Prior to his wartime military service, John Davis was reportedly capable of a 705 lb deadlift in 1942 while weighing just 193. Heavyweight Carl Pepke held an official post-war deadlift record of 667 lbs in 1947 before Peoples broke it with a 699 later that same year. 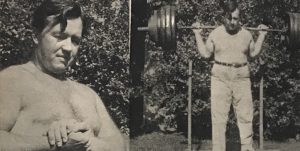 A must remarkable deep knee bend aka. squat being performed by little Eugene Felton, of Denver, Colo. at a recent contest held in the Fitzsimons gym. He squats with 370 while only weighing 118 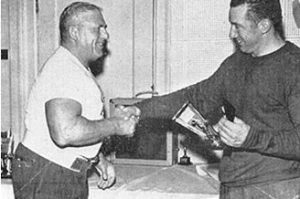 Interestingly, in 1940 another good deadlifter (650+ lbs), 48 year old fisherman Karl Norberg, made a name for himself during an impromptu curl and press contest with the great John Grimek. Both men wound up curling and pressing over 260 lbs! Norberg was a late bloomer who hadn’t even started lifting weights until his 40’s! He would resurface many years later as possibly the strongest geriatric lifter ever.

Jim Halliday was an English Olympic weightlifter who had the misfortune whilst in the armed forces during WW2 to be captured in the fall of Singapore by the Japanese in 1942.
Jim survived the horror of Burma and remarkably after repatriation in 1945 and return to Lancashire England Jim started training and lifting again, unbelievable three years later at the 1948 London Olympic games he won a Bronze Medal he was up against the best in the world after only 3 years earlier being in a Japanese POW Camp being worked and starved to death!

Long before benches were used for this movement, an exercise called the “press on back without bridge” (left) was performed much as the modern floor press is today. Another variation known as the “press on back with bridge” (right) was even more popular and was literally a barbell belly toss. Not surprisingly, much more weight could be raised when using this bridging maneuver. The men demonstrating the lifts in the above photos are Eddie Harrison (left) and John Grimek (right)

Benchpressing received a lot of coverage in the bodybuilding mags during the late 1940’s and this really helped catapult its popularity among returning servicemen. For Hoffman and his Strength & Health readership, however, the bench press was panned during the 1940’s as an exercise of questionable benefit that led to overdeveloped pectorals and poor posture. At best, Hoffman maintained, it could be used to help one’s overhead press 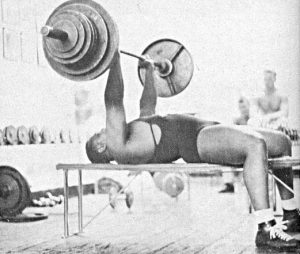 Despite Hoffman’s reservations, benching grew in popularity and even York weightlifting stalwarts like John Davis occasionally worked the movement. Supposedly, Davis was once handed 400 lbs while lying on the back and had no trouble pressing it to lock out. Like the old belly tosses from days gone by, the press on box or bench exercise still required one to pull the bar over the head from the floor if assistants weren’t available. Bar stanchions wouldn’t become available until the 1950’s 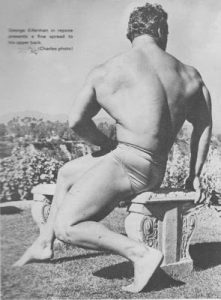 A well known benching star from this era was 1948 Mr. America George Eiferman. He was renowned for his massive pectoral development and was accordingly featured in many “chest routine” articles during the 40’s and 50’s. In 1949 he performed 20 easy reps with 250 lbs in order to win an early benching contest. A year later Iron Man reported that Eiferman had singled 390lb in training. 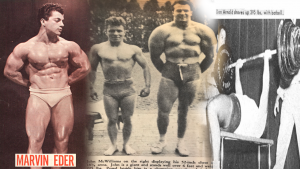 Another decent bencher (he would make an official 408 lb record in the years ahead), deadlifter, bodybuilder, and noted track athlete from the 1940’s was John McWilliams. So was 230 lb Don Arnold, who officially benched a world record 388 in 1949. Probably one of the best pound for pound benchers during this era however, was Marvin Eder. A top notch weightlifter and bodybuilder who never weighed over 200 lbs, Eder was benching nearly 400 lbs by 1950. During the next decade his strength in the bench press and overhead movements would soar considerably higher. 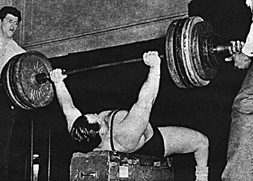 Although he was not yet well known in the United States, the best bencher in terms of most weight lifted was a Canadian named Douglas Ivan Hepburn. By the late 1940’s he had already officially hoisted 360 lbs and was quickly approaching the mythical 400 lb barrier. During the 1950’s Hepburn would become the first man to officially set several landmark records in both the squat and bench press movements.

By the 1940’s, the deep knee bend / squat was universally regarded as an essential exercise by both strength athletes and bodybuilders and was finally getting a lot of well-deserved press in the muscle mags. One man in particular – Peary Rader (above) of Iron Man fame – became a leading advocate of this exercise.

The original Iron Man magazine was started back in 1934 by Rader and by the late 40’s had grown into a full-fledged bi-monthly periodical. Although it would never rival Hoffman’s Strength & Health in terms of circulation, it did have a decidedly more “hard-core” flavor. During those years that Rader was at the helm (1934-86), Iron Man became renowned for its “no-nonsense” approach to iron game journalism and its eclectic article content.

In 1940, Your Physique launched Joseph Weider’s initial foray into the muscle mag industry. While lacking much of the sensationalism that characterized his later periodicals, it would be Your Physique’s total devotion to bodybuilding that helped launch Weider’s eventual control of the sport. Your Physique, while not of particular interest to strength athletes, would occasionally carry an article related to the power movements.