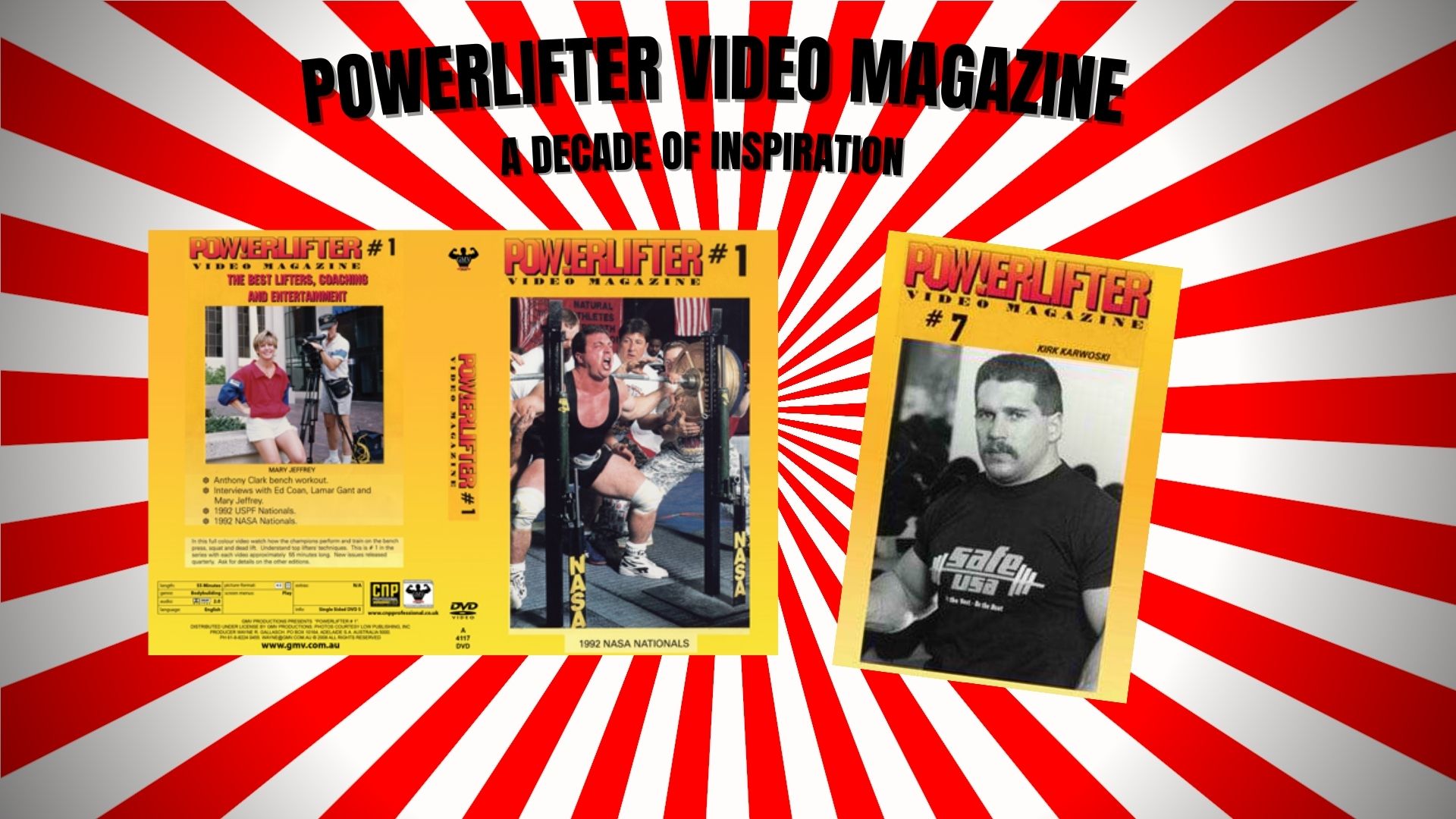 In 1992, when no one had a cellphone and the internet was in it’s infancy, Powerlifter Video Magazine debuted. This quarterly videotape series was the product of entrepreneur Ned Low. Advertised in Powerlifting USA and later many of the days muscle magazines, the product was a huge hit amongst hard core strength trainers. Eventually, Ned wrote a column to promote the videos as well as the sport, in Powerlifting USA.

Each issue had footage of recent world records as well as other huge lifts of the day. There were many male lifts shown, but also female lifts, at a time when female powerlifting had not experienced the growth it currently enjoys. In addition to contest footage, each issue had a star workout with the best powerlifters in the world showcasing how they trained and built their strength. Some of the lifters who were featured were Anthony Clark, Gary Frank, Beau Moore, Tony Conyers, Glen Chabot, James Henderson, CT Fletcher, Rich Schoenberger, Ron Fedkiw, Josh Bryant, George Brink and yours truly.

The hosts of the show were Chuck LaMantia and Vicky Hembree, a very accomplished lifter in her own right. If there was any criticism of the product it could be that the coverage was somewhat west coast centric. This was due to Ned living in Southern California and training at Gold’s Gym Venice Beach, where many segments were filmed.

Westside Barbell and the Iron Island Gym were frequently featured in segments showing the training styles and strong people from those respective institutions. Louie Simmons and Dr Ken Leistner would detail aspects of powerlifting and strength training that were very helpful to strength trainees who craved great knowledge and motivational footage. Remember, there was no social media then.

If memory serves me correct, Ned released at least two special bench press issues, with the top bench pressers of the day explaining how they built their pressing prowess. My good friend Josh Bryant appeared on one of those tapes, justifiably so because he was the youngest raw 600lb bench presser in the world.

The video series was similar to PLUSA magazine in that lifers from every federation received coverage. The footage was also very entertaining, with articulate lifters being given the opportunity to express their insights on training and competition. There was also some comedy as host Chuck had a great personality. Sadly he just passed away suddenly last month. One tape even had a swimsuit edition similar to sports illustrated.

The video series came to and end with issue 34 in 2002. Today, there is a company online called GMV Bodybuilding that sells digital downloads of many of the issues. I have all of the issues on VHS tape format and they have stood the test of time.

Ned treated me great, even though he was not a lifter himself, he featured me and my family in his monthly PLUSA column called Power Scene- which I posted on my Instagram. Ned came to my home gym and filmed a segment on how I trained for my max effort lower body strength.

I do not know where Ned is today, as I have not spoken with him since I left California in 2004. I do know he used to produce a similar video product for Blackbelt Magazine that focused on the six major styles of martial arts. I think Ned also did some type of car video tape series as well, but I have no idea what make and model or even era he focused on.

Thank you to Ned Low for allowing those of us who loved Powerlifting to see and hear our stars in action as well as in instruction. You greatly influenced a generation of lifters and kept the sport ascending.