Powerlifting and strength sports – it is all in your mind! 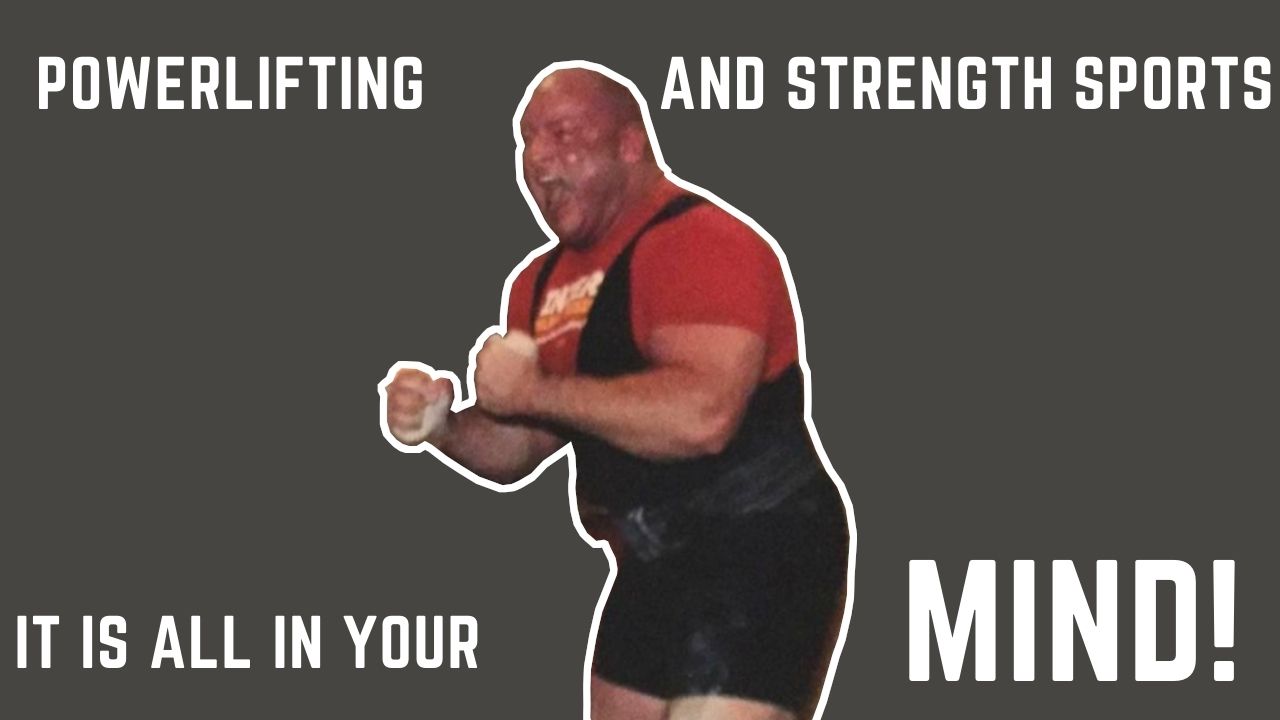 There is a famous clip of Arnold Schwarzenegger talking about how all success in serious strength training all starts in the mind. As a lifter lucky enough to have started out with numerous news stand publications which catered to serious bodybuilders and powerlifters. Numerous bodybuilding magazines, specifically Flex and Muscle and Fitness had articles by Peter Siegel, who was the premiere peak performance hypnotherapist in the U.S., as well as monthly articles by Judd Biasiotto in Powerlifting USA. Dr. Judd was famous for squatting 600 at 132lbs and shared the sports psychology he used for elite lifting in Powerlifting USA. I became very proficient with visualization while in my late teens because the strength publications constantly reminded their readers of the importance of mental training.

In college I read everything I could find about Bill Kazmaier. His training booklets had a handwritten print of his trademark phrase: “Conceive, believe, achieve.” When he was interviewed during the 1982 World Strongest Man Contest, Kaz told the television audience that he was sure he was the strongest man who had ever lived. Confidence has always been a Kazmaier strong point- and he has elaborated many times in interviews that you can find on YouTube, about his belief in visualization. Kaz described during a SWISS Conference Speech that he envisioned that his arms were hydraulic pistons when he bench pressed-this mind and muscle connection led to a half dozen all time world bench press records in the early 1980s.

As I have been a competitive strength athlete for over 35 years, I am aware that many people experience anxiety over performing their sport or from life in general. I myself had a high degree of anxiety when I began junior high school and had to traverse the city of Boston to get to school through the melting pot that is the ethnically and socially diverse city. I got beat up more than a few times while I was 12 and 13, but I soon discovered lifting weights and proper eating. Coupled with joining the football team and falling in love with training- my anxiety was gone by my sophomore year and I loved high school, as well as college. To be quite honest, I had huge success as a teenage powerlifter and I never felt anxiety with my sport or in my life. I know many people are not so fortunate and I also know that anxiety can return in your life- as it did in mine once my children became teenagers. My three children had various issues growing up and I did feel very anxious while I navigated parenting three teenagers while working full time.

What I did, at any time I felt anxiety, was to make sure I trained. Every house I have owned has had a garage gym. My family could always see me train- fit around my work and family responsibilities. At times all my kids trained with me and I was able to introduce them to what was my anchor in life- training. I would explain to them that when there were issues you could not work on, it was best not to worry about those issues. As for me, I have never had such clarity as I do while the endorphins of a strength training session were coursing through my veins. I also would tell them that mental health is extremely important and that it begins with you controlling your body through training. I modeled and talked about stress management, positive action, consistency, discipline and dedication. I had entered contests every year since 1986, but in 2015 and 2019, I entered no contests because I had family issues and work responsibilities that were far more important than entering any contest- but I still trained as best I could.

I have a vast library regarding strength training and I would study those publications that stressed the mental aspect of strength training and stress management. John McCallum’s Keys to Progress, Bill Starr, Marty Gallagher’s the Purposeful Primitive, and Brooks Kubik’s Dinosaur Training are so classic, go to resources that always give me perspective.

More recently Josh Bryant, unequivocally the most successful strength athlete to become a world class coach, has written extensively in many of his Jailhouse Strong books, articles and blog entries on Joshstrength about the importance of mental training. Josh and I learned from each other how to train our minds to be like steel traps, impervious to pain, injuries, training in extreme climates as well as training following extensive travel. Josh was a close personal friend of the late, great Fred Hatfield, PHD and known as Dr. Squat following his 1014 squat at age 46 and only 257 lbs. Dr. Squat wrote often about the mental health one needs to cultivate and maintain to optimize one’s strength and performance.

It is 2021 and now there must be dozens of apps which help athletes with their mental training process. I have not explored these tools as I have mastered the art of visualization for me. I highly recommend you invest the time in training your mind even more often than you train your body.

2 thoughts on “Powerlifting and strength sports – it is all in your mind!”