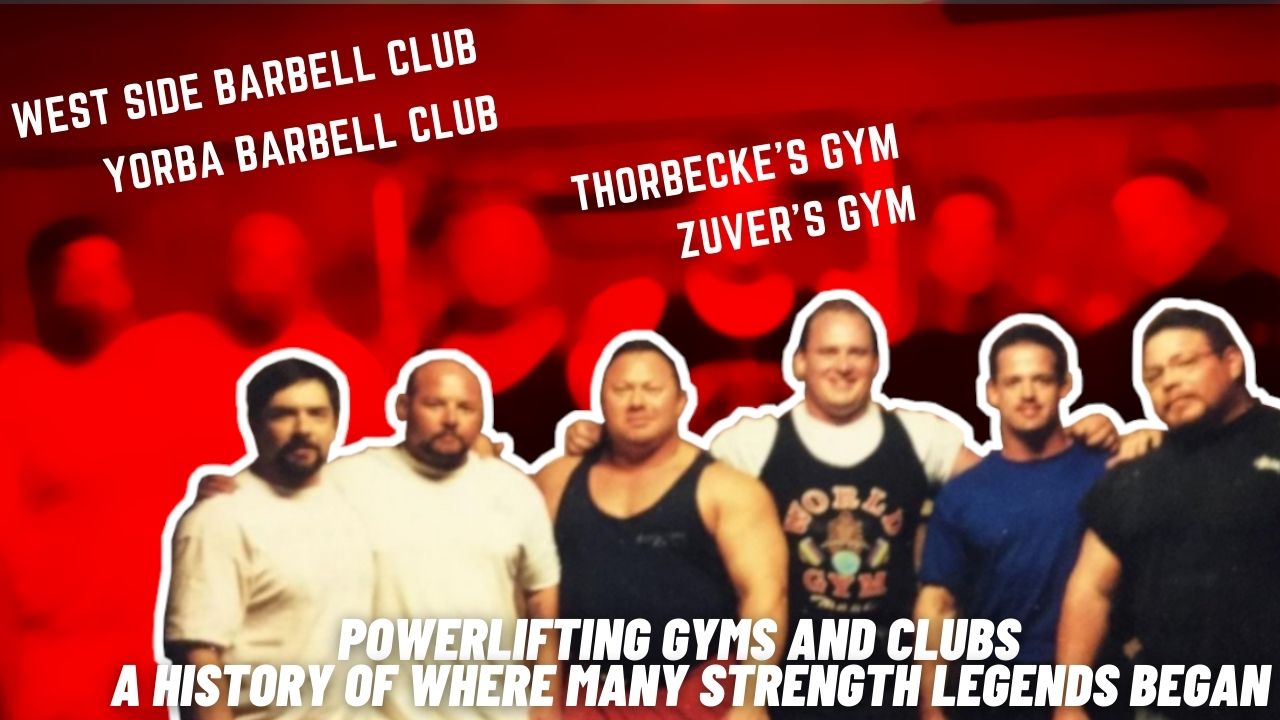 When I began Powerlifting, I was gifted with a complete collection of Powerlifting USA Magazines, which began publication in 1977. Fortunately for me, many of the authors for the magazine, such as Dr. Ken Leistner, Marty Gallagher, Mike Lambert, Ron Fernando and Louie Simmons had a strong sense of the history of the sport and shared it with their readers. I immediately realized that many of the great lifters of the past were part of Powerlifting clubs that laid the foundation for future clubs and a culture that breeds strength success.

The first Powerlifting club discussed was the Original Westside Barbell Club of Culver City California that was established by Bill “Peanuts” West in the mid 1960s. Powerlifting Hall of Fame members Pat Casey and George Frenn, as well as many of the strength stars of that era trained at Westside. Thankfully, Armand Tanny chronicled their training exploits for then Joe Weider’s Muscle Builder Power Magazine. Dr. Ken Leistner traveled to and trained at Westside Barbell and detailed his experiences and knowledge in multiple articles.

Dr. Ken also trained at the contemporary rival Powerlifting club of the time as well, Zuvers in Costa Mesa, California. Dr. Ken’s articles describing the unique atmosphere of Zuvers are famous in the hardcore Powerlifting world. Thorbecke’s in the Phoenix area created many successful champions, notably the immortal Jon Cole and Jack Barnes, yet their training and club culture was not put in print even a fraction as much as Westside and Zuvers.

Dr. Ken and Tanny’s articles described how the training environment at both Westside and Zuvers resulted in both clubs producing world record performances in many of their lifters. This led me to be convinced that I needed to find a powerlifting club if I wanted to achieve my strength goals.

I left my local YMCA and found Workout Plus in Dedham, Massachusetts in 1987. Workout plus was a huge fitness center that was the creation of Dick Paaso, a University of Oklahoma Football player whose vision was a place where every member of the community could train, yet he loved heavy training and powerlifting. After a year of training hard, supporting the advanced powerlifters on the gym’s team, I was granted admission to the team. The requirements were that I had to compete at least at State level competitions, I had be a great teammate and I was expected to work at any of our own gym’s sanctioned contests.

It was at Workout Plus that I learned the culture of Powerlifting, how to correctly spot a lifter, how to load a bar, how to take care of the gym’s equipment, how to train, and most importantly how to be respectful of every gym member- regardless of their strength or fitness goals. While learning those skills, I was granted a yearly free membership for myself
and a training partner of my choice, meet entry reimbursement, branded attire and a great bunch of grown men who had my back and always helped me with many of life’s problems.

During the Eighties while I was training, Powerlifting USA covered teams at Samsons in Orange, California, Black’s Healthworld of Cleveland, Ohio, Westside Barbell of Columbus, Ohio, Frantz of Naperville, Illinois and the Wild Bunch in West Virginia. There were other clubs, such as Suncoast in Florida, as well as the Thompson Power Team of Southern California. Not as much was written about the culture of those clubs, but many of their lifters performances spoke volumes.

Louie Simmons wrote articles on his clubs training philosophy and Frantz wrote a fantastic book about powerlifting called his Ten Commandments. I relocated to Southern California to begin my professional career in 1991. Between 91 and 94, I trained at The American Eagle Gym in Norwalk, California as well as PowerHouse Gym of Chatsworth. The Eagle was home to Richard Schoenberger and CT Fletcher, two amazing bench pressers- as well as great men, but neither gym had an established powerlifting club.

During this time, Westside Barbell released this famous video tape series and had a monthly column in Powerlifting USA Magazine, as it had become the most famous powerlifting club in the world. I joined a gym called Uptown Gym in Whittier, California in 1995- becoming a member of their powerlifting crew, which taught me a lot and helped me become stronger.

How I established my own Powerlifting Club

Despite having a good crew and a decent gym, I was determined to have my own gym at a house I purchased in 1996. The house had a two car garage, which I slowly converted to a gym for two years, at which time in late 1997, I opened Yorba Barbell, in Yorba Linda, California. By competing in Southern California meets since 1993, I had identified and made friends with all the strong Powerlifters that would be my teammates. I came in 2nd at the 1995 California State Championship, won the best lifter trophy at a 1996 local meet and my performances had established me as a serious lifter. Thankfully, there were no better powerlifting club options in Orange County, California in 1997 so my garage became the “go to spot.”

Lessons I had learned along the way were to buy the best equipment possible, train as hard as possible, and be positive and honest with my teammates about form, squat depth and training issues. Keep the gym clean, have a great sound system, and always recruit strong, high character people to come to train. Everyone who trained at my gym competed and if you didn’t enter the contest, you went to support any member of our club who was competing. At meets, you were expected to wear the team’s T-shirt and be a recruiter as well as an ambassador of the club. If some local lifter was really good at a certain lift or had improved greatly since the last meet- find out what they were doing in training and where they were doing it.

I remember how excited I was to buy equipment for my gym. I bought wood from Home Depot to build the platform and horse stall mats from the local feed store for other areas of my garage floor. I bought a brand new Body Solid power rack from an exercise store in Yorba Linda for 179 dollars. This rack held up to 900 lbs on many occasions. This rack is still used by my good friend Mike Martin in Texas today. There was a local publication in Southern California called the Pennysaver that was like Craig’s list-it had an exercise equipment section where I found people selling gym equipment and weights.

In the fall of 1997, I saw an ad for a Golds Gym that was closing in the Inland Empire, about 45 minutes from my house. I got there, drinking my Ford Escort, a compact car, and I met a gym broker who was there already and had bought most of the equipment.

The gym broker, whom I believe was named Larry, was a shrewd businessman- but appreciated my passion, intensity and 300lb frame. He sold me 10 awesome American Worldclass Barbell plates that were made in California during the 1960s. I bought a Barbell that is a clone of a Texas power bar, a flat bench, and a military press bench – all for 400 dollars. I still have all this equipment today.

The final thing I bought that day was a pair of 130lb dumbbells- which Larry said he would charge me 10 dollars, if I could carry them farmers walk style to my car. I was up to the challenge and have those great dumbbells today. I jammed all of this equipment into my Escort, making the tires look lower, and I drove it home. This equipment started my gym and I then added more pieces gradually, as I didn’t have much money then for lifting, but I got what I needed and we immediately started to get stronger together.

Buy nice shirts and attire for your lifters. Hang out with them outside the gym. My training partners and I shared many meals, trips, laughs and adventures together. If your training and gym environment is not fun and making you better- find another gym or club.

Read and research strength training all the time when you run a club. Promote your lifters all the time. There was no social media in the early 2000s, but I used powerlifting message boards and PLUSA Magazine to promote my club and sell a video tape of us training hard- thanks to Dr. Ken Leistner. Today with social media, always promote your fellow lifters and club. I do that today with Beaststrong Powerhouse in Tucson. I had to relocate from Southern California to Texas for work in 2004, but I have always maintained a gym in my garage. I have trained with competitive lifters in Texas and now in Arizona. Often times I teach correct powerlifting and strongman club culture and etiquette to new lifters. I have a blast watching new lifters get strong and learn the beauty that is a successful powerlifting club.