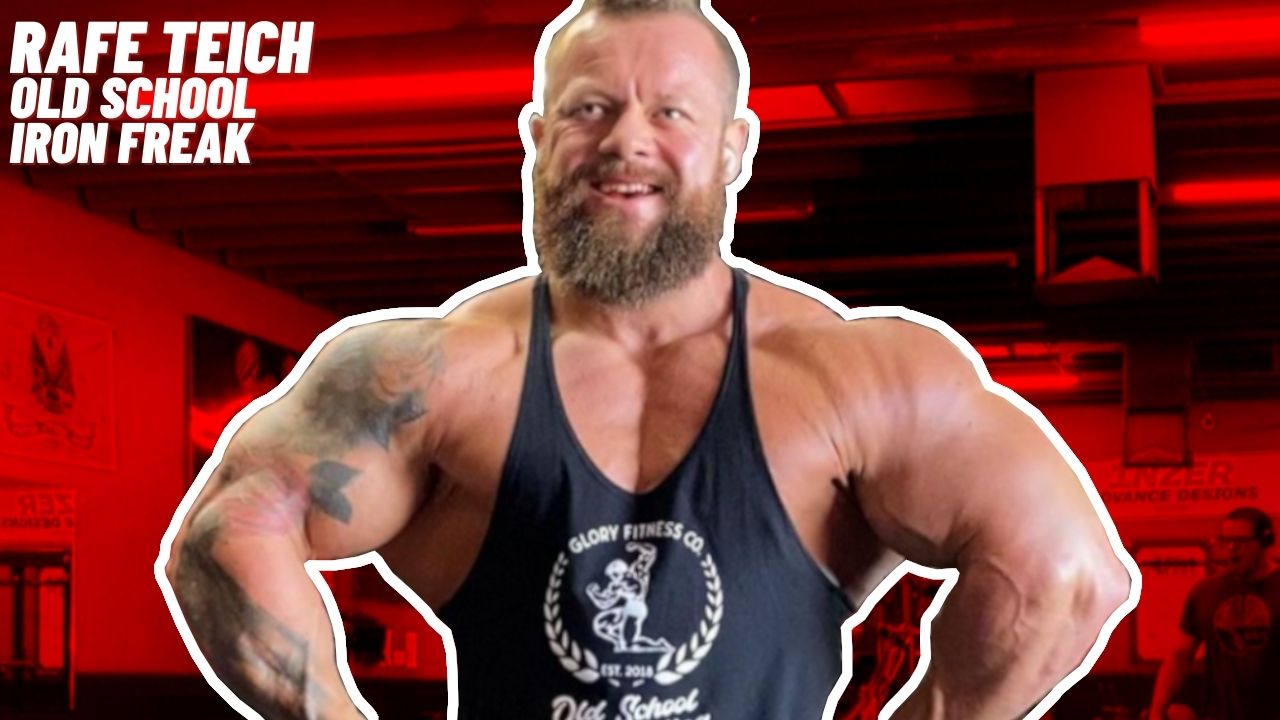 A few years ago, I saw on Social Media that a new gym opened in Tucson on the east side called Beaststrong Powerhouse. I went and checked out the facility. I briefly met Rafe Teich the owner, but with my life circumstance at the time, I was unable to train at the premier strength training gym in Tucson. Fast forward a few years and Rafe expanded his operations to include another gym location on the West side of town near where I live.

In 2003, Rafe won the NPC Collegiate and Teen Nationals at 174lbs. Then he went on a hiatus. During that self imposed hiatus from bodybuilding competition, Rafe continued to train with a goal of one day becoming an IFBB Professional Bodybuilder.

Rafe has an Instagram account which shows hard and heavy training such as a May 28, 2017 post which shows him doing dips with two sets of chains around his neck at 2 am! As both BeastStrong Gyms are open 24/7 and 365 – the beast never has to sleep. A post a few months later shows Rafe smoking 315 on the bent over row for a set of 12 repetitions!
Rafe is seen squatting 665lbs in the fall of 2017 with a caption that the lift was a week before the Phoenix Europa. Rafe went on to squat 650 officially at the Europa Powerlifting meet.

Very soon after this meet, Rafe married the love of his life Melissa! This was the key to his happiness and future success.
On April 8, 2018, Rafe posted a video him hammering a heavy banded deadlift that was over 600lbs at the top.
In June 2020, BeastStrong Powerhouse hosted its first strongman contest called the Viking Strong Competition and it was officiated by nine other than many time Worlds Strongest Man Competitor Jerry Pritchett.
Rafe has written on his Instagram that he has 10 siblings and that 7 of them have been able to work for him at one time or another-which has enriched his life and been a dream of his since he was a young man, to have such a thriving business.
On September 30, 2020, Rafe posted a great progress picture showing the incredible back development he created with three years of effort.

During the summer and fall of 2020 there are numerous posts which show Rafe’s nutrition such as vertical diet posts, meat shakes ala vertical style and his favorite dine out meal, sushi.

A December 8, 2020, post shows Rafe dominating 605lbs on the Hatfield Squat for 10 reps! Two days later, his post states that he normally does triceps after chest and biceps after back but today he that day he was doing an arm workout. As blunt as a sledgehammer, the post says that heavy sets were done for 20 repetitions and heavier sets for 12. Rafe is seen doing strict tricep push downs with a specialty bar.

In keeping with the sage advice of Stan Efferding, Rafe’s page indicates he takes frequent ten minute walks and bathes in the bright Southern Arizona sun for his natural boost of vitamin D and dog walking time. Two days before Christmas, Rafe gifted us with a 405 incline press for a double. Later that week, Rafe does a box squat of 10” with 405 for a paused set of 10 reps, all strictly paused.

There are many heartfelt posts by Rafe about his wife. Expressing his undying love, devotion and thanks for the support and drive she has instilled in him.

On April 2, Rafe posted a double bicep shot with a stated weight of 267lbs and 18 weeks until the Phoenix Europa Bodybuilding Championship.

A May 22nd post of Rafe doing chest supported smith machine rows. This set to failure shows how dense and “3D” the muscles of his upper body is, with deltoids larger than his head and trap density that has to be seen to be below.

On August 6, Rafe won the Phoenix Europa Bodybuilding Championships in the Heavyweight Division.

On September 2, Rafe came in 6th in the heavyweight division, in a division with 30 qualified entrants!

I only met Rafe earlier this year and in my past I had different experiences in meeting professional or high level amateur bodybuilders. Some were great guys and others were not- period. Rafe is the former, as he was in the gym personally training clientele at the same time he was running two gyms, one of which he renovated and the second he is expanding and re-opening next month. Whenever I would see Rafe during his grueling prep, Rafe was energetic, positive, encouraging and always interested in talking training, gym equipment, the future plans for his gym, or nutrition.

On November 6th and 7th, 2021, Rafe celebrated the grand reopening of his Beaststrong Powerhouse East location by entering the in-house strength competition that was an incline bench on Saturday and a trap bar with low handles for a maximum on Sunday. Rafe manhandled a 415lb incline press and the next day did a 625 lb trap bar pull! These lifts were broadcast on Instagram live on the Beaststrong Powerhouse Instagram. Rafe made these lifts after sleeping a few hours per week as he and some close allies worked around the clock to basically double the size and amount of equipment in his gym.

Rafe has truly taught me that you can be a National level competitive bodybuilder, strength athlete and successful gym owner while being a great friend and mentor.