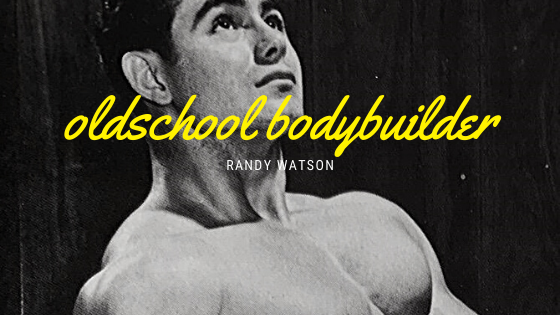 Oldschool bodybuilder Randy Watson was born June 8, 1941, in the heart of the south – Tennessee. He has received his B.A. degree from David Lipscomb College in Nashville, and he was working toward the degree of Master of Theology by extension. He has been married 4 1/2 years and has a 13 months old son, Terry.

At the present time, he is a full-time minister at the Southside Church of Christ in Manchester, a position he has held for a year and a half.

He started training about seven years ago, weiging 120 pounds at a height of 5’7″. Through 1961, he had made fairly good progress in building strength, health, and muscle. Then in 1962, he had a serious operation in which four feet of his inestines were removed.

During his three week stay in the hospital, he saw 25 pounds of hard-earned muscle disappear. Excatly three months later, however, due to progressive and correct weight training, he had recovered the 25 pounds which he had lost and then some. He was in the best shape he had ever been in his life. Shortly thereafter, he won the Mr. Tennessee contest, weighing 160 pounds.

He has kept up his training and has reached his present weight of 175 pounds, which is easy for him to stabilize. This weight gives him enough muscle to work with in building a symmetrical and balanced physique.

He eats four or five meals a day, but they are small. They keep him full, without that bloated feeling which one sometimes gets after a heavy meal. He prefers to take Protein of the Sea as a protein supplement, and he also uses the Special Vitamin Kit, which includes the vitamins and minerals he feels that he need.

He usually works out in his basement gym with Don Shaw, his workout partner, and several other teenagers and adults. Don is an excellent training partner, as he pushes him hard and keeps up with him, set for set.

This is quite remarkable, considering Don is in his 40’s and has recovered from a heart attack. When Watson is training for a contest, he travels to Nashville (63 miles) once a week to work out at Seth Smith’s Cosmopolitan Health Studio. Seth is a constant source of encouragement to him. He has helped him throughout his bodybuilding career and has furnished all expense money for his travels to various contests. Without his support he would not have been able to the 1963 Jr. Mr. America (which he won), the 1964 Mr. America (3rd place) or the 1964 Mr. U.S.A. (2nd place).

Randy Watson training routine consists of 2 1/2 hours work on the upper body and 2 hours on the lower body. Although this is a fairly basic routine, he has discovered that he can make better gains with it than a routine which includes more work. He enjoys training with heavy weights and in each training session he likes to use a heavy weight for the last set of each exercise. The first two sets of seach exercise are merely warmups for the lest, in which he attempts to achieve his maximum poundage.

This, then, is basically the routine that Randy has used to mould himself into one of the world’s finest physiques. Although Randy is an accomplished musician, and even seriously considered a career as a jazz tombonist, he decided to make the ministry his life’s work.