Grizzly bear, strongman and father. That was Doyle Kenady. The magazine “Powerlifting USA” shows Doyle Kenady’s 903LBS deadlift. The world record at the time was Bill Kazmaier’s 886lb. And then Doyle broken Kaizmaier’s record! He was an amazing athlete and human. They don’t make men like Doyle Kenady anymore. 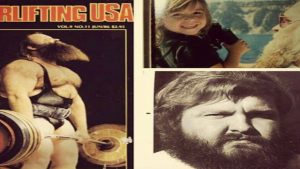 Kenady was a running back in high school. But high school was his last for football. “I injured my right knee and didn’t trust it enough to play in college”.
All of the people that met him said that he was a very laid back guy. Kenady had the look of a grimly or harsh guy but he was a genuine, soft spoken, “gentle giant”.

He used to be outdoor and cut woods with his friends. One of his friends told this story :

“He was a friend of mine.. We used to cut wood together every year for 3 years and he would work my 22 yr old butt under the table. We used harvest Xmas trees too, and that was damn hard work, which he was never scared of.”

He was a supportive and helpful Giant. Furthermore he did not embrace his celebrity status. The today’s Athletes are used to talking bullshit and getting attention.
But this old-school strongman and powerlifter was a humble man and lived a quiet life.

Kenady’s Feat of Strength is tremendous. Dr. Squat was friend with him and he told this story :

“Doyle’s lift will take a special place in the history of great lifts because he did his record buster after massive attempts in the squat and bench press only minutes before. His deadlift was done under the most trying of circumstances possible, under near crippling conditions of fatigue.

Moreover, it was his third attempt that cracked the 900 pound barrier. Imagine! Two attempts in the squat, one of which was over 900 pounds; three attempts in the bench press, all over 500 pounds; then two attempts over 830 pounds in the deadlift before pulling the heaviest, official record breaking deadlift of mankind to an erect standing position. “

Doyle Kenady’s Mental Attitude
Doyle had his own gym called Kenady’s Gym and the emphasis was on power. No bodybuilders or pretty boys allowed. He didn’t mind bodybuilding movements, but you had better do them heavy.
“It doesn’t matter what you do in here, what matters is what you do in the contest.” That’s way Kenady trains year-round, gearing himself for the biggies – the national and world championships. 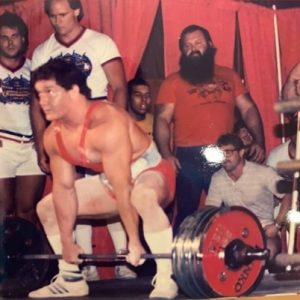 “I’ve never really had a meet to my satisfaction,” said Kenady. “What I want to do is lift what I’m capable of lifting. I don’t compete against other guys, I compete against myself.”

“My heavy day was like a religious experience – you get the sweaty palms, the doubts, the apprehension of whether you can triple anywhere from 800lb to 900lb with workout partners whose own workouts would suffer if you missed. But when you did it, I was on such a high that I would drive home from my workout didn’t even remember the drive” -Doyle Kenady

That competitiveness drove him to the National Association of Intercollegiate Athletics shot put in 1972 while competing for Oregon College of Education. That same pushed him through his heavy workouts.

How Did He Train?

His training consisted of the three big lifts without much assistance work, and his schedule had more rest days than training days. Doyle preferred heavy triples. Dr. Squat and Doyle Kenady trained together at the Oregon State University. They did heavy deadlifts. At he beginning Dr. Squat started warming up and ended up deadlifting 825lbs easily. He sat down and watched while Doyle finished warming up with 825lbs this was Dr’s Squats best Deadlift. Then came the real surprise. He loaded 895 lbs on the bar. Bam Bam Bam  Doyle did 3 reps. Local folk believe it was nothing more than tectonic activity causing the disturbance!

1999 Dolye Kenady, 50, of Salem died of a heart attack. Doyle’s funeral was packed. It was the ultimate weightlifter’s funeral – there was a barbell in the back of the church loaded to 903lb and a picture of Doyle deadlifting that 903lb on the cover of Powerlifting USA (see above).