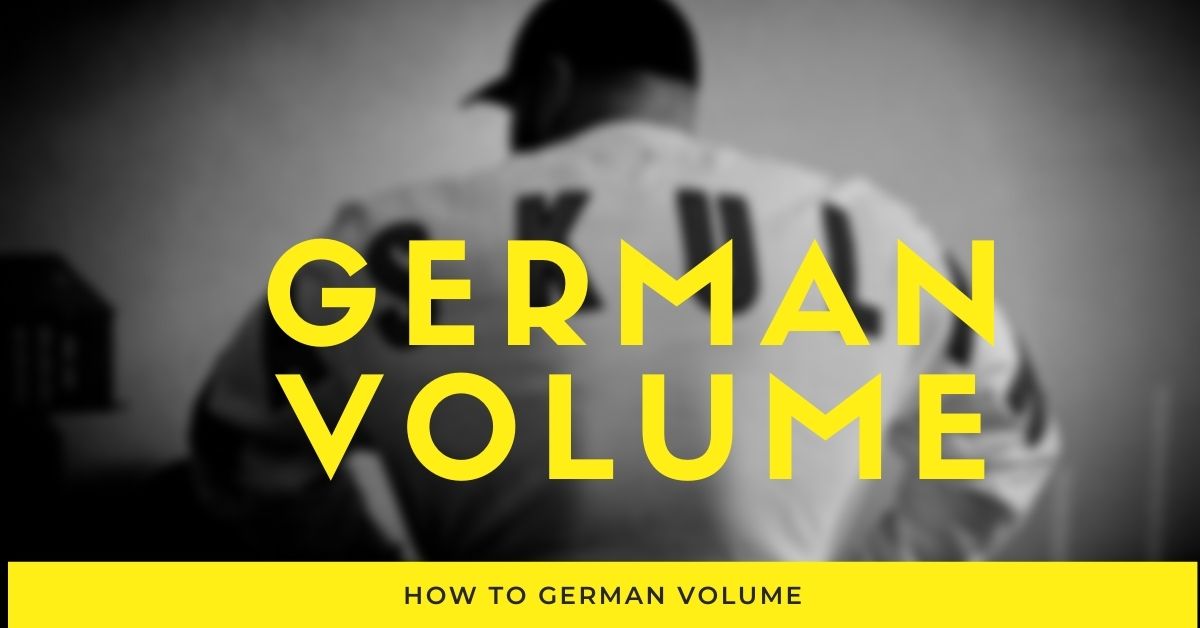 Tired of reading science based stuff? And maybe you just want to read the results by real life athletes? Great, I picked up 2 famous german athletes, who followed the German Volume Training Principle and shared their experience!

On the german Forum “team-andro.com” there’s a user named “MH-Pumper” and he wrote this:

“I trained it for about 12 weeks in winter 2014 – 2015. Found the plan of training pretty boring after a few weeks, BUT! the results were quite remarkable.
I gained a lot of muscle mass (I have no numbers now). I have also been able to lower the Kfa. Since then I do a GVT cycle of at least 12 weeks once a year. I will try 16 weeks this year after the summer.”

Goko is the german Eliot Hulse. He said it’s great for Fitness-guys and bodybuilders, who don’t want to destroy their joints. You’ve to do 10 sets with 10 repetitions! Rest: 60 – 90 seconds (it depends on the exercise you’re using).

Goko: “If you’re a beginner, then I would suggest: do only 10×10, that’s it. Don’t use any assistance exercises. Great example is the chest..Benchpress is the main exercise..and the assistance exercis would be butterfly.”

Who invented German Volume Training?
Rolf Feser popularized it. He was a National Coach for weightlifting!

Goko: “Vince Gironda “recycled” it from Rolf Feser. Be careful about Vince Gironda exercises like “Gironda Dips”. It’s not always the best. But I still like Vince Gironda. Fact: Gironda took the GVT and changed some stuff and he marked as his own.”

I know it sounds very low. You are benchpressing 100 Kilo and now you are using 50 kilo..It’s not about the weights, it’s about the “Time On Tension”…

Example 1: Benchpress: Lower the weight down (neg. movement). You should take 4 seconds of time to reach the chest. Then press it up without rest explosivly (pos. movement). Then repeat it. Try it with your 60% max..”

Goko made the statement he isn’t really a fan of Time on Tension during conv. Deadlift. Because it will start with a slow movement and then turn it into a fast movement.

Sumo Deadlift: It’s the opposite. The first movement is fast and then in will turn out very slow. That means, you can use your legs at first, then the gluteus, lower back will play a role and will slow the movement down.

Goko: “So lowering the weight down during deadlift for 4 seconds (neg. movement) should work, because it’s 50 or 60% of your one rep max. So you’ll not injure your back.

And please don’t jerk the barbell off of the floor with force (pos. movement).”

According to him, it’s great for bodybuilder and powerlifters..It’s normal and ok, if you are using this system for the first time and not managed to do 10×10. It takes time.

German Strongman “Dennis Kohlruss” followed the principle of GVT, and he uploaded an experiment of it. Introduction starts as follows: “Some people are saying that’s BS, some people are saying you have to give it a try… Today we are Front-Squatting 140kg with 10 Sets and 10 repetitions!

Warming up with 100kg 10 reps, then the German Volume Training starts at 140kg. The first, second and third set was easy.

How to choose the right weight!?
Dennis’s front squat weight of 140Kg is 50% of his max. So the first is quite easy. Basically in the first set of 10, he is capable of doing more than 10 repetitions. But he said, he wants to save energy for the 4th – 10th set.

Tip: Sometimes during front squatting the barbell starts moving away, so so he’ll dry his T-shirt with a line of chalk (only shoulder level).

Dennis’ comments:
3th: “crazy pump”
4th set: starts breathing heavily
5th set: “Ohhhh, my thighs are soo thick… I’ve got some head ache. Problem is now my legs are filled with blood heavily,ufff”
7th set: “I know it’s not looking heavy, but it’s feeling heavily. It’s like I am dreaming now. I am not able to feel my legs”

8th set: “…*breathing….uff, only two sets”
9th set: “ehhh ufff, the problem is my muscle is not able to connect with my mind…”

After finishing the 9th set he is drinking Coca Colca..

Dennis finished the 10th set, smashed the barbell away and lying on the ground..He’s screaming for some Coca Cola. – End