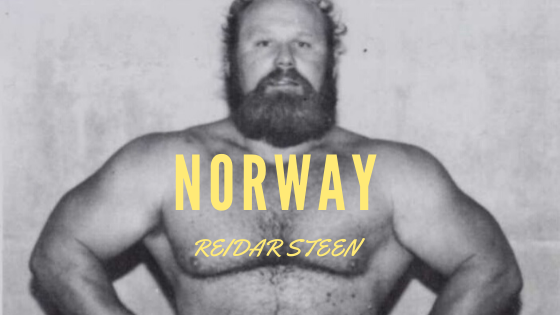 The following article was written by Vern Hollister in 1985. – Mr. Berg

“In 1982, Reidar Steen placed third at the Senior Men’s World contest, and in 1984, at the World meet in Dallas, Texas, he placed fourth. At the age of 41, Reidar has won the World Masters championship. He benched, squatted, and deadlifted in an effortless manner, going 9 for 9 with a derrick-like consistency that had the audience watching in respectful awe.

An affable and friendly man, Steen, with his reddish bear and bulk, fits the stereotype of a Viking. Looking like a descendent of Eric the Re, if you put a hat with horns on his head, he’s resemble Hagar the Horrible of the comic strip.

When I first saw Reidar in Toronto, he remembered me from taking pictures in Dallas, and he winked cheerfully and shook my hand. He looked in fine shape and ready for the Masters Games Challenge, though George Leggett, the British Coach, teasingly reached out to push at Reidar’s midsection and probe his condition. Leggett’s hands met a stone wall, however, and Steen’s eyes twinkled as George stopped chuckling. The Viking strong man grinned and patted his own stomach, using both hands as if he were playing bongo drums, before he headed up the four, long flights of stairs, like climbing the Matterhorn, to the Toronto YMCA weight room to work out.

That Y has won plenty of architectural awards, but few who have them are powerlifters, I’d guess. Only the most dedicated would climb those stairs. Like Steen.

Though on a Thursday prior to his Saturday contest, he handled over 500 pounds on the squat and worked hard on the bench press also. He and the four other NORGE lifts were pretty serious group, though friendly and helpful as I took pictures and talked to Reidar as best I could, considering the language difficulties.

Steen can speak English well enough to be understood. He learned it the one year he sailed on a ship to US ports when he was in his teens.

It was after his sailing venture that he sea-legged his way into a club and began training, which he has done now for 23 years.

“I body build for 5 years,” he said. “Best finish is Number Three.” That early training shows, especially in his chest and upper arms. IF my conversion from centimeters to inches is correct, his biceps are just shy of 20 inches, his neck is 19, and his chest is a centimetre over 75 inches, at a weight of 242 pounds and a height of 5’9″.

One of his fellow lifters offered when they heard him give his arm size that he curled with 100 kilos.

“I do it for two reps and 80 kilos for eight reps.” He shrugged his massive shoulders.

“It is no special weight. My best exercise is the pressing behind the neck. I do 145 kilos (about 320 pounds):

That is very strong, a good lift.”

He’s had more than one good lift. After getting rid of his bodybuilding trunks, he trained on the power lfts two years before entering his first meet. Then, he managed 200 kilos in the squat, 150 in the bench and 220 in the deadlift. His best since that beginning, sixteen years ago, is a 350 kilo squat, 235 kilo bench and a 315kilo deadlift, which Reidar considers his toughest lift, because his fingers and hands are short and blocky, so it is difficult to hold on to the bar.

Still, he has reached a hefty 1947 total, and has remained unbeaten in the Land of the Midnight Sun.

I asked him of he was his nation’s strongest lifter. “I have been the strongest man in Norway for many years,” he said matter of factly, with no hint of the conceit that some might have.

He holds and has held Norwegian powerlifting records “almost too many too count”, having continued to set records as he moved up in weight. He held all the 100 kilo records at one time and held them “for many years”. Some were recorded as high as the 125 kilo class, the weight at which he won his European championship in 1980.

Steen guesses that he currently holds “seven or eight”.

Since Norway plans to host some major competitions in the future, I hope that someday, I may see him work out at his club in Trondheim; see the fjords and waterways where Reidar and his club mates used to train with single sculls. “Later,” he said, “I took a boat with four men and rowed. It was good training.”

He winked playfully and flexed his right bicep. Then he agreeably muscles his way through a few poses from his bodybuilding days. Had George Leggett seen his demonstration, he wouldn’t have kidded Reidar about the shape he was in, as hard as the craggy rocks of the Norwegian coast.

Reidar talked about his family. First, he said he had four children, a boy of 14 who doesn’t seem interested in powerlifting, two girls, and the he laughed and made a gesture over his stomach. He’d gotten ahead of himself.

His fourth child is not expected until December. By the time this is read, Reidar will have won his seventeenth consecutive Norwegian championship, and he will be working to support the addition to the family.

“I am a truck driver,” he said, in the same manner his American counterparts would say those words, with some pride and a hint of a challenge. Then Norway’s Strongest Man turned to the challenge of winning a World title, gave a wink, and went nine for nine.”