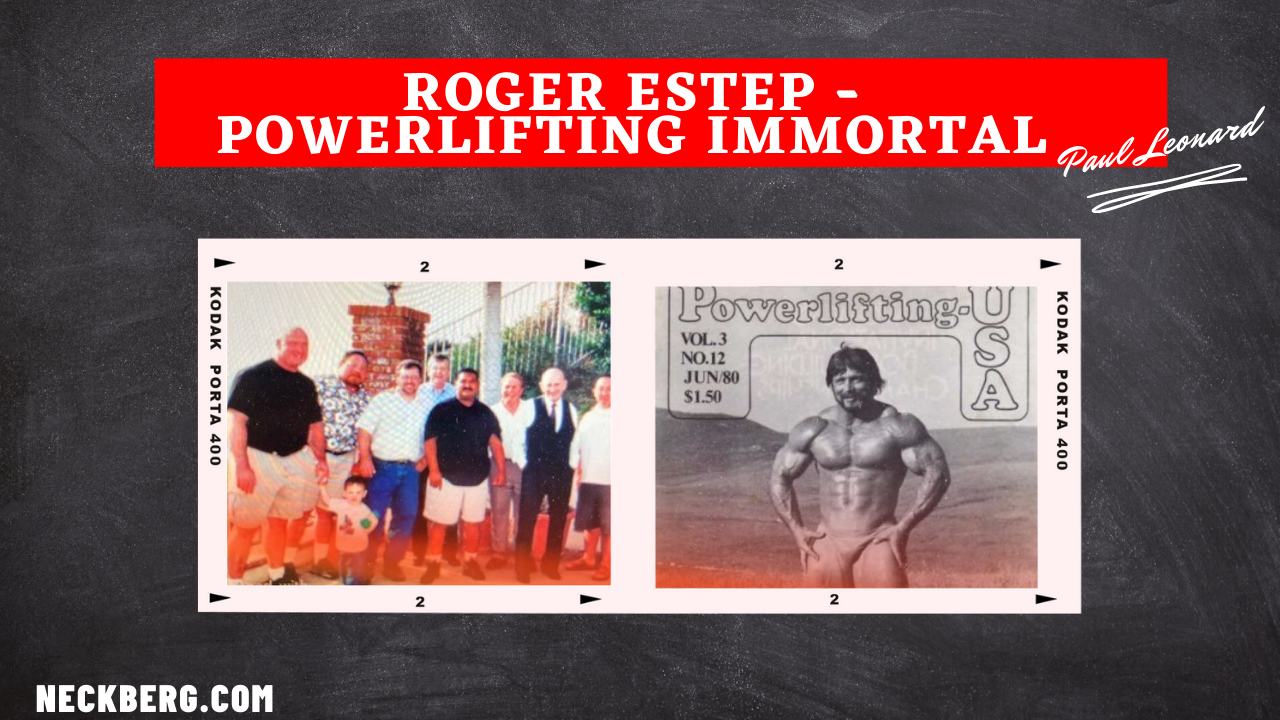 I am fortunate to have met and known Roger Estep personally the last ten years of his life. I grew up seeing pictures of Roger in Muscle and Fitness magazine when he was training as a power bodybuilder and contemplating entering physique contests.

Roger sported such a dense physique by the mid 1980s that it was inspirational to look at his images. By 1986, I had discovered Powerlifting USA magazine and began reading Roger’s advice column which was very helpful.

In 1988, after I traveled to and came in 2nd at the ADFPA Eastern USA Open in Gaithersburg, Maryland, at training partner at my gym named Dennis Coholan gave me every issue of Powerlifting USA magazine which had been in print since 1977. These old issues form the basis of my Instagram account, Powerlifting History Illustrated.

These old issues were a goldmine of solid training information as well as the basis of many of my training programs and philosophy. Roger Estep was a huge influence on me with his original Westside Barbell training routine, his great lifts, and his out of this world physique. Everything a young strength athlete wants to be and achieve.

Roger was on the cover of numerous issues, lifting and again in posing trunks once showing what a powerful physique he had. In the 1980s, Roger had a question and answer column in PLUSA that was very helpful.

During the 1980s, Roger was under contract to Joe Weider and his out of this world physique was featured prominently in Muscle and Fitness Magazine, a publication that at one time reached millions of readers world wide.

Roger had an impressive scrap book of memories that he maintained into his last days on earth. He has the letter he received from the Cincinnati Reds Major League Baseball team which was a contract for his skills. The Reds were one of the premier teams in all of baseball during the 1970s, so that will show you the type of athletic ability Roger had. Roger was a terror on the softball fields of Orange County after he stopped training for competition in the lifting sports. A late 1980s PLUSA had a photograph of Roger through during an at bat that displayed incredible form. Readers may not realize this but softball was big in America in the late 1970s into the 1980s, with professional barnstorming teams and television coverage.

In Roger’s scrap book was a letter signed by Joe Weider promising a 100,000 per year salary if Roger became a professional bodybuilder. There was a picture in Roger’s house signed by multiple time Mr. Olympia winner Frank Zane that was signed to the best built powerlifter in the world. High praise from the best built man of the late 1970s.

Roger was a Nuclear physicist, who owned the California Medical Imaging Registry of Orange, California. Roger’s house was beautiful on a steep hillside over looking much of Orange County. You could see the beach from his house, approximately 30 miles away. Roger was extremely financially successful and he shared his wealth with his friends.

In 2002, Roger’s health was failing so I posted on the popular powerlifting forum, Go Heavy, that Roger would love to hear from old friends and competitors. The outpouring of emotion and support from so many strength stars of the 1970s was impressive.

This posting also led to Roger re-kindling an old relationship that led to his marriage the following year!

Roger passed away on June 23, 2005, at the age of 57 from complications of treatment for glioblastoma. There was some speculation that this type of cancer could be caused by Roger’s work and subsequent exposure to nuclear material.

Roger was married and had 4 step daughters at the time of his premature demise. He has recently been remembered as the platform monster he was by the immortal Louie Simmons in his book the Iron Samurai.

I highly recommend this book! Louie has always said he was jealous that Roger got to leave Ohio and train with the original Westside Barbell Culver City legends. Like Roger, I myself was better for moving to California to pursue my powerlifting dreams.