The story of Ronald Thompson (b.December 26, 1943 d. 2003) is one of the big success stories of modern bodybuilding. He literally pulled himself up from the bottom in a short time and his dedication should be an inspiration to young bodybuilders everywhere. He won the 1974 Mr. America title, with unquestionably one of the greatest physiques ever to support that Number One American title.

Higher goals did not occur to him until after he had crossed that bridge. Iron Historian Franklin Page saw and witnessed Ron Thompson in 1971, when he competed in the Mr. Midwest contest in Cincinnati. According to Franklin he was obviously unusually symmetrical and even had notable muscle size, but he was also obiously on the pudgy side and smooth. The Midwest contest always precedes the Mr. America contest by two or three weeks, and Ron went on to York to compete in the lineup out of which Casey Viator emergy as the 1971 Mr America. 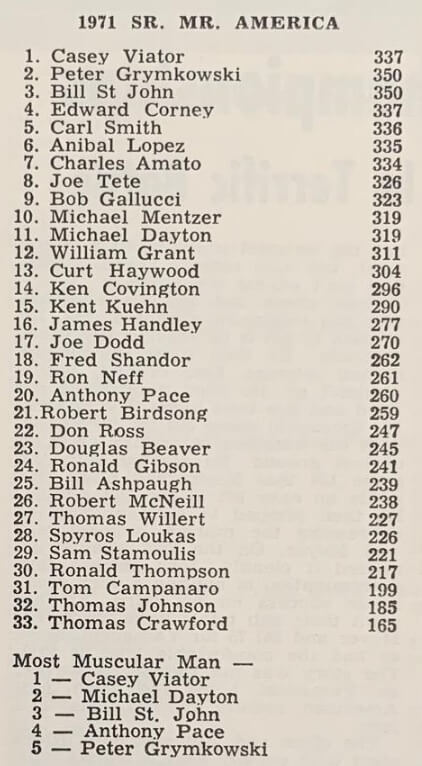 Ron Thompson placed 30th in a field of 33 men. Would that be encouraging to anybody? He was beaten by a whole battalion of famous physiques that year, not one of which has since won the Mr. America title. Ron has.

He came back to Cincinnati in 1972, again symmetrical, again pudgy and again placing discouragingly. After the contest, Franklin Page recall that Ron came up to ask what was the matter with him and what did he need, the ever-recurring and often unanswerable question ever on bodybuilders’ minds.

According to Franklin Page the only thing that it was possible to say was that he was too smooth to make sufficient impact in the face of the generally higher standard of muscularity by then established.

Ron took it to heart. In not much more than three weeks’ time he completely metamorphosed his body and appeared at the 1972 Mr. America contest in Detroit with startling muscularity and without losing any of his fine symmetry. How he did it in such a short time.

He placed 7th, beating out that battalion which had pushed him almost to the bottom the year before. He went on that year to win the Junior Mr. USA title, placed well in the Senior Mr. USA contest, and won the Mr. World title in Harrisburg. It was apparent that Ron was on his way and that he would ever after be the man to beat.

However, 1973 did not turn out to be a good Thompson year. He got the flu in the early spring and on top of that he had adverse effects from the medication prescribed.

This set back his training seriously and he was conspicuously absent from national contests until the Senior USA. According to Frankling Page he looked sensational and it was difficult to understand why he was not able to place higher than 5th.

One reason given – a weak one, admittedly – was that Ron was at a disadvantage in comparison to the men who had fine tans. His skin is light and does not tan effectively and it does tend to make him rather wraithlike in the lineup. But the muscles were there and that beautifully proportioned body that is impossible to fault.

The 1974 has worked out all right. Ron’s training went well from the start and he won an overwhelming victory at the Junior Mr. America contest in May. It was plain to all that here was a physique for the records, and practically unbeatable.

The Senior title was a big question, however, until the prejudging on the morning of June 9. There could not have been many doubt then. Ron’s muscularity was razor sharp and bone deep, his muscle size fairly took the breath away, and there was still that flawless symmetry that nobody could match.

His was one of the very best physiques ever to go under lights, impressive beyond words, but also extremely beautiful by esthetic standards. He is a great winner!

Ron has trained most of the time in his basement gym, where he can arrange equipment and schedules exactly as they please him. A good deal of his training equipment has been built by himself and a friend, who design and fabricate all sorts of special numbers to enhance the training day.

Ron has, from time to time, trained in gyms in Flint, but none has been so satisfactory as the home deal. One difficulty has been to hold onto a training partner, but usually he has managed. He has been most fortunate in the support of his wife Donna, whose understanding and patience has known no bounds. Howmuch this means to a man who is ambitious to each the top.

According to Franklin Page Ron is still impressive when clothed because of his unusually broad shoulders. He has a comparatively small but well shaped head and features, and small hands.

When he strips down he gets three times bigger. His physique is most impressive because he has slender joints from which the large muscle masses swell into very rich and eyecatching contours. In addition to his broad shoulders and the resulting dramatic V-shape, Ron has always been notable for his splendid legs. From the earliest years of his training he has given as much priority to leg training as to working his upper body.

The size of his muscles all over his body is fantastic. Attention is always drawn, too, to his outstanding abdominals, about which he does comparatively little.

They have come along as a natural consequence of Ron’s diet, more than as a result of hard work in that area.