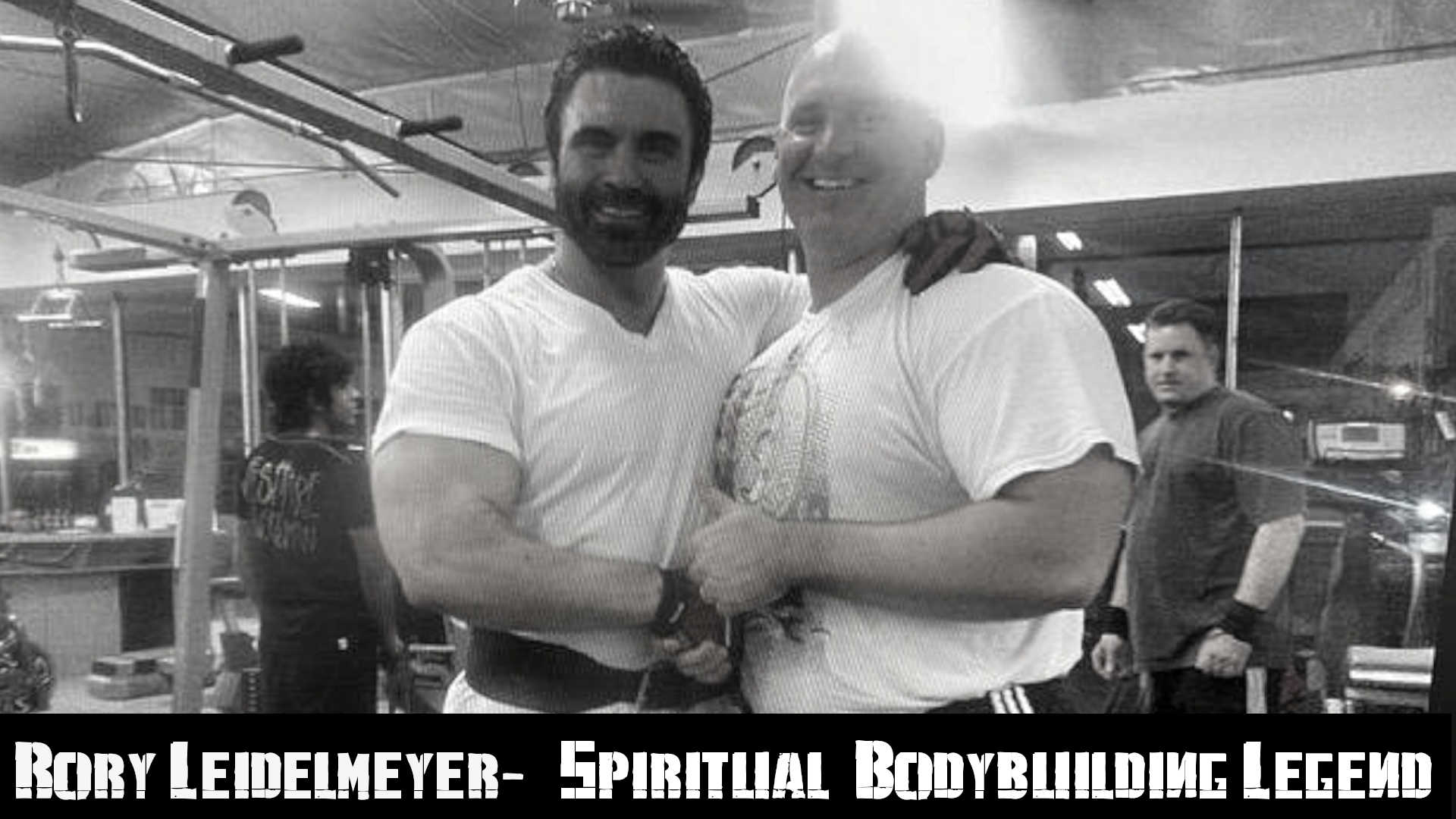 I have had the honor of calling Rory Leidelmeyer a friend for over 20 years now. I last saw Rory in person in 2014 when I worked out with him and my oldest son at the Uptown Gym in Whittier, California. The way Rory spoke with Louie inspired him to no end, as Louie still speaks about their conversation. Rory had been a high school football star and his speech to Louie motivated him to become the starting QB of his junior high-school team the following two years.

My son Louie with Rory, under Rory’s famous poster from 1992.

Rory first entered a gym at the age of 5 because his dad was a bodybuilder.
Rory was born in Holland, but immigrated to the U.S. when he was young,so his dad could find work as a welder. Rory went to California High in Whittier and was a quarterback and kicker for the football team until an injury curtailed his career.

In 1975 Rory, at 143 lbs, decided to become a bodybuilder. Rory won the 1980 Mr. California Contest, undeniably the hardest State level bodybuilding contest in the world to win, given California’s huge iron pumping population. Rory next won the title of AAU Mr. America in 1988 – after four times coming in second place at that contest. Often times, Rory has been referred to as the most talented bodybuilder who never obtained professional status. I would refute that title, because although Rory never received an IFBB pro card, he certainly has made his living via bodybuilding for over 40 years and still going strong.

Rory has made his professional living as a fitness and nutrition consultant to support his wife Cynthie and two daughters, Sasha and Ciara. I know that Rory has always put his family first in regards to making life decisions related to career as well as bodybuilding pursuits.

When interviewed by the Los Angeles Times in 1991, Rory described how he was able to pull a man trapped inside a car that went off a Southern California Freeway in 1986. After dragging the man out by forcing open a door no one else present could budge, the vehicle exploded and the man had been rescued by Rory.

Rory is a devout Christian who uses social media platforms to express his faith and his personal, beliefs. On social media there are hashtags knows as Roryrisms, which almost always end in “Do the work.”

Rory’s infamous 100 rep sets:
If Rory has one particular training methodology attributed to him, it would be the 100 rep program that has been documented by Muscle and Fitness, Ironman Magazine, Muscle and Strength. Com.

ESPN’s Inaccurate Portrayal of Rory on their Tony Mandarich Program
When interviewed, former College Football Star and NFL bust Tony Mandarich admitted that Rory has never done him wrong. Mandarich claimed that Rory introduced him to the injectable painkiller Nubian. This is a strong accusation against a man who has the highest character and ethics. Rory was never interviewed for the ESPN piece despite the fact he could have been easily contacted via social media or at the Uptown Gym in Whittier where he has been training people since 1994.

Although I have not been with Rory in almost 7 years, I am able to keep up and be informed as well as inspired by his social media content. Rory’s Instagram posts are very helpful and current. Rory has created only 6 YouTube videos on his channel but they are very interesting.

In Rory’s first video entitled “Everything I am” from May 2018, he states he has been bodybuilding for 50 years and what he loves about it is that what you put in to it, you get out. Rory considers bodybuilding an art and to have a classically sculpted physique, a person needs to fully develop every body part. “The human body is the most beautiful thing god has ever created.”

As Rory provides a master class on tricep push downs he describes how the most important factor is breathing and that a person wants to inhale breath towards their heart and exhale it away from their heart. “The rhythm of your breathing will be the rhythm of the movement” Rory says he tells his students: “Each rep is a set, each set is a journey, you’re behind the wheel, enjoy the drive. Every rep counts “- Rory.

“Be in total control- don’t allow the amount of weight to control you.” Those moments when I am moving a weight, the competition is with myself- not you he says to the man he is training with. Rory demonstrates a very ballistic style as he works his triceps hard with push downs and over head rope work.

Rory is innovative in the gym and demonstrates how he uses a hammer strength seated row machine to to one arm close grip benches. During this exercise, Rory corrects his partner by saying that he is wasting energy by expressing pain on his face, he needs to focus more on his tricep. In talking about the resistance during the one arm tricep presses Rory described how he feels no friction and the weight is an extension of his body.

Rory says he is in his 60s, yet still feels like he is in his 20s. Rory encouraged his partner as he got near failure on the presses by saying that he did not want more than everything he had. “You’ve got nothing to prove, but to your self.” “You can’t walk away from here wondering, that’s just regret.” “In failure there is disappointment, in not trying, there’s regret. Don’t walk around with regret.”

“Success is a journey, do not settle, do not sloth. As long as you have a breath of air, you have an opportunity.” Rory continues as they have now moved on to another form of push downs to target the long head of the tricep. “Learn the language of the tricep. You are not a tourist any more.” The greatest, most spiritual sound you will ever hear is your heartbeat and if you can connect with your heart when you are training, there is no stopping you.” “If you work from the mind, by my age, you are retired. If you work from the heart, I get up every day and kick my heels and rejoice.”

Rory’s YouTube content is full of arm and chest exercises to target the specific muscles he has worked for over half a century! Sadly one person in the comment wrote that Rory is 6 years older than Ronnie Coleman but look at how healthy, strong and muscular Rory is compared to the 8 time Mr. Olympia! In an August 2019 chest workout video, Rory details how he has used visualization his entire career to hit new weight goals in the gym.

Strength athlete for 35 years who wants to share Classic Powerlifting and strength history. I am Arizona based and seek to share my knowledge.